As far as film blind spot goes, this is perhaps one of the most glaring for me given its iconic status. Well, better late than never right? Forty seven years after its release, I finally get what the fuss is about. Now, I’m not saying I *get* the movie, mind you. In fact, it’s the kind of movie that is fun to read about afterwards. According to IMDb trivia, the film apparently prompted a large number of people to walk out from its premiere, including star Rock Hudson who said “Will someone tell me what the hell this is about?” Ahah, I can totally relate. Per IMDb, the film’s co-screenwriter Arthur C. Clarke once said, “If you understand ‘2001’ completely, we failed. We wanted to raise far more questions than we answered.” So I guess I don’t have to feel bad that the movie left me scratching my head.

SPOILER ALERT! Just in case some of you still hasn’t seen this yet, be mindful that I’ll be talking about some major plots in this post.

I guess I’m lucky that I was able to keep spoilers at bay in regards to this movie, as I had no idea there’s actually apes involved in this movie, and the Dawn of Man sequence was almost a half an hour long! I knew that the movie would be slow and there’d be long sequences with no dialog, so I’d imagine it’d be something like Terrence Malick’s Tree of Life, so I was prepared for that. In fact, I quite enjoyed watching the gorgeous imagery set to sweeping classical music (more on that later) and boy, what a visual treat it was. 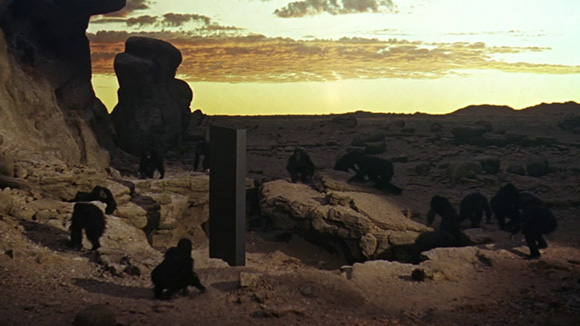 I have to admit that I nearly fell asleep a few times as I was already so tired when I started watching it, so I had to stop after about an hour or so, and continued the next night. I don’t usually do this but I figured the film deserved to be seen with fresh eyes.

When the film’s over, my first reaction was ‘well I could see why this film was so beloved even four decades later.’ It’s not the most emotionally-gratifying film as I there’s really no character development, but visually speaking, the film truly set the bar for sci-fi and no wonder it’s been an inspiration for so many filmmakers since. Even other iconic sci-fi works like Blade Runner, Star Wars, Star Trek, all the way to recent ones like Interstellar have been inspired by Kubrick’s magnum opus. I mean, the ‘Star Gate’ sequence alone is so similar to the wormhole scenes in Interstellar. I read afterwards that that extended sequence of that funkadelic sequence was popular among young adults who love watching ’em when they’re high. Ahah, I bet that’s still true today.

There’s something so timeless about the production design, especially the HAL 9000 computer with its omnipresent red eye. Kubrick and Clarke made the right decision making it so simple, instead of going with a mobile robot they initially set out to do. I think it’d have looked more dated than the simple but ominous red eye. Despite its simplicity, it manages to be quite terrifying at times, especially during the time when Dave (Keir Dullea) was trying to get back into the main ship. The film isn’t an *acting* film per se, as the actors aren’t exactly given much to do, but I think Dullea did a good job nonetheless, and the scene of him trying to dismantle HAL is quite memorable. It’s a pretty suspenseful scene and Dullea conveyed the dread and terror very well.

It’s a testament that creating a certain atmosphere is crucial to depict genuine suspense and there’s certainly a horror-like vibe during the entire scene. I literally gasped when the LIFE FUNCTIONS CRITICAL lights came on… then followed by LIFE FUNCTIONS TERMINATED in the scene where HAL systematically killed the rest of the ship’s crew in hibernation. It’s just one of the many minimalistic scenes that made such a huge impact in the film.

The cryptic nature of the film, with its various metaphors and allegories, certainly sparked all kinds of theories. My hubby and I watched a two-part Youtube videos on the meaning of the monolith, which argues that the monolith is basically “…an advanced television teaching machine.” It’s quite a fascinating argument and I’m sure there are others, but I really don’t want to go into that rabbit hole.

I have to mention the music here, which is crucial given there’s such few dialog in the film. I’ve heard that opening theme Thus Spoke Zarathustra soooo many times, as it’s so overused in popular culture that it’s become a cliché. But hearing it in the context of the opening sequence made me appreciate just how iconic it is. Johann Strauss II’s The Blue Danube (composed in mid 1800s) is also one of my favorite classical piece, which somehow fits the tone and feel of this film it’s as if it was made especially for this project.

So what’s the verdict?

Well, I’m glad I finally saw this film. I didn’t fall in love with the film, I think it falls under the category of ‘films I appreciate but doesn’t quite love.’ I was bowled over by what Kubrick achieved in 1968 – he is a true visual artist with an exquisite eye for details. Nearly every frame is like a work of art and it still looks modern even by today’s standards. Yet it’s not an emotionally-engaging film, which to be fair is probably not what Kubrick intended it to be anyway, so it’s not something I’m eager to watch again. That said, I still give it a high rating because I do think it deserves its classic status and it’s a film that every film fan should see. It took me a while to get here, but I’m glad I finally did!

The Blind Spot series was originally spearheaded by Ryan at The Matinee, and I was also inspired by Dan’s list at Public Transportation Snob.

What are your thoughts on 2001: A Space Odyssey?