Happy Oscar Weekend everybody! To those who give a ballyhoo about Oscars or award season in general, hang in there, award season is almost over 😉

I usually feel like Oscar ceremony sneaked up on me, but this year I’m glad it’s finally here! Part of it is really so we can all move on, but I’m also curious who’d finally win the top honors. It’s the cinematic Superbowl, the one big *sporting* event for those who don’t care about sports, such as yours truly. It’s an amusing diversion really, so I never get too riled up when things don’t go my way [as is often the case]. Mild rants are warranted though, and that’s just part of the fun & frivolity of it all.

I was scouring the interweb and found some nifty Oscar-related stuff, so I thought I’d share ’em before I get to my predictions.

Check out THR’s illustrative cover with all the Best Picture nominees done in Oscar statuette’s style. 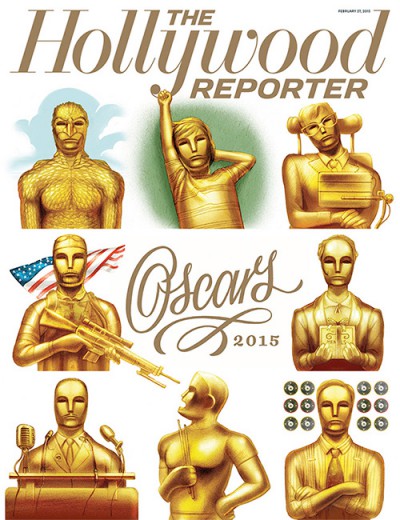 THR has been running the Brutally Honest Oscar Ballot series, revealing a glimpse into a few of the Academy voters’ thoughts on the race.

My favorite Oscar expert in the blogosphere, Josh @ Cinematic Spectacle posted 10 Things to Know Before the Oscar Ceremony

So apparently they’re making an Academy Museum of Motion Pictures in L.A.? Check out the building rendering here. IMDb presents a special look at Oscar history in support of that upcoming museum:

Now this is pretty mind-boggling stuff. The Wall Street Journal posted this INTERACTIVE MAP of the major Oscar nominees. Basically it shows data of social media (mostly Facebook) conversation about the nominated films, actors and actresses and which movies and people are winning the FB Oscar “conversation” from Jan. 1 to Feb. 16.

If they were the Oscar voters, American Sniper and Bradley Cooper would’ve won by a landslide!

If you’re like me and you haven’t seen ALL of the Best Picture nominees yet, well, Mashable has this handy guide as to WHERE to catch up with 7 essential films.

Well, with only 24 hours to go, I still have three more films I haven’t seen yet from the Best Picture nominees. I wanted to see Whiplash but it’s not available to rent yet on iTunes, so we saw The Theory of Everything instead. In any case, here are my predictions:

Who will win: Boyhood
Who should win: Birdman
Ok so I haven’t seen Boyhood yet but I really have a hard time imagining that it’d top Birdman for me.

Who will win: Richard Linklater
Who should win: Alexandro G. Iñárritu
Ok so Linklater’s effort was incredibly ambitious so I have to give him kudos for that. But what Iñárritu did is just as unconventional and spectacularly creative.

Who will win: Eddie Redmayne
Who should win: Michael Keaton
Ok I’m glad I finally saw Redmayne’s performance last night and he was impressive. Yet I’m still rooting for Keaton for many reasons. One of them is the fact that his role is the only one that’s not based on a real person and yet he’s able to create such an affecting and authentic performance.

Who will win: Julianne Moore
Who should win: Rosamund Pike

Who will & should win: J.K Simmons
If Simmons is as good as everyone’s been saying – and the praise seems unanimous –then he ought to win. He’s done such great work in his career in various supporting roles. However, I can’t lie that I wish either Ruffalo or Norton would get it.

Who will win: Patricia Arquette
Who should win: Anyone but Meryl please! Other than that, I think Keira Knightley did a smashing job and 2015 has been quite a year for her playing against-type roles.

Who will & should win: Emmanuel Lubezki
Poor Mr. Deakins, the Susan Lucci of cinematographers with 12 nominations and not a single win yet. But what Lubezki did in Birdman is so magnificent and inventive.

Who will & should win: Birdman
No contest here, it’s one of the most imaginative stories in recent memory.

Who will win: Foxcatcher
Who should win: The Grand Budapest Hotel
They certainly did an amazing job w/ Steve Carell’s face in Foxcatcher but I didn’t care for the makeup for Ruffalo and Tatum there. ‘Grand Budapest’ did a stellar job overall IMO.

Who will win: The Grand Budapest Hotel
Who should win: The Imitation game
I LOVE both Alexandre Desplat’s scores this year, but I give The Imitation Game a slight edge as it perfectly captures both the intelligence and the emotional aspect of the story.

Who will win: Glory
Who should win: Lost Stars
As Selma has no chance in winning Best Picture, it’s very likely the Academy would give this win as a *consolation* prize.

Who will win: Song of the Sea
Who should win: Big Hero 6
I’m torn between How to Train Your Dragon 2 and Big Hero 6, I’d be happy with either win.

Who will & should win: The Grand Budapest Hotel

Best Visual Effects
Captain America: The Winter Soldier
Dawn of the Planet of the Apes
Guardians of the Galaxy
Interstellar
X-Men: Days of Future Past

Who will & should win: The Grand Budapest Hotel

So what do you think of these Oscar tidbits and predictions, folks?