I always enjoy seeing actors reinvent themselves and one of such actors who did a pretty phenomenal job recently is Dan Stevens. Most of you probably knew him from as Matthew Crawley from Downton Abbey, but I first saw the British actor in another period drama, BBC’s Sense & Sensibility. Well, gone is his chubby cheeks and floppy hair. Here he’s sporting a lean, sinewy bod with slicked-back hair AND a Southern drawl. He’s still got those dreamy baby blues though, which he uses to great effect to portray one of the creepiest characters ever.

The story is a simple one. A mysterious stranger, David, suddenly shows up at the door saying that he’s a good friend of the the family’s deceased soldier son. Without bothering to check for his ID, the lady of the house just lets him inside AND invites him to stay the night. Despite initial hesitation (well, barely) the entire family pretty much just welcomes him with open arms and of course things slowly unravels until it completely gets off the rails.

Just like most horror/thriller movies, The Guest is filled with obtuse characters who make a series of glaring mistakes, but that’s sort of part of the fun. The movie isn’t exactly unpredictable as you’d know from the start there is something really off about *David* and that he is not who he says he is. But yet you’re in for the ride to discover just who the heck he is, and the film moves at a swiftly pace that it never overstays his welcome. 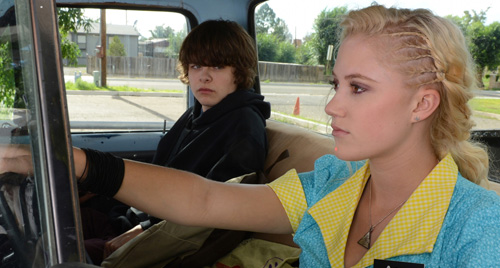 Director Adam Wingard has mostly done horror films (V/H/S, You’re Next) and this one certainly has that campy horror feel to it. The style and sound is a throwback to 80s/90s action thrillers, nicely mixed with suspense and humor. Stevens seems to be having a blast being a bad ass action antihero here, and he’s proven to be versatile enough to display affable charm one minute to psychotic menace the next. Maika Monroe is quite good as the daughter in the family who’s much more shrewd than meets the eye.

The finale in a school’s Halloween maze makeshift is cleverly executed and stylishly shot, complete with a chase through a hall of mirrors. The synth (or goth electronica as they’d like to describe it) music by Steve Moore is pure 80s nostalgia that adds a dose of excitement and amusement to the action-packed scene. I’ve featured it on a Music Break here, it’s a great example where the music sets the tone of the movie brilliantly. Glad I finally saw this one, and it lives up to the great reviews this movie’s been getting and it’s surely destined to be a cult classic. Despite some decidedly-cheesy and predictable moments, it’s definitely one of the most entertaining offerings of 2014 and I definitely want to see more of this naughty side of Dan Stevens 😉

What do you think of The Guest?