Can’t believe it’s already time for the main award season, with the kick-off of tonight’s 72nd Golden Globes Awards… once again it’s just four days shy of the Oscar nominations (January 15). I posted the list of the FILM nominees here, but I’m not making any predictions this year, but I do have my winner wish list, especially Michael Keaton for Birdman and Rosamund Pike for Gone Girl. I’m honestly torn between Norton and Ruffalo, both are phenomenal in their respective roles, so I sure hope one of them would win this thing!

I’ve only started tuning in about a half hour before the show started, but thanks to Twitter, here are some notable dresses of the night:

…
LOVE Rosamund, but that’s quite an ill-fitting dress. I think it’d work better on skinnier girls who’s not um, so well-endowed. 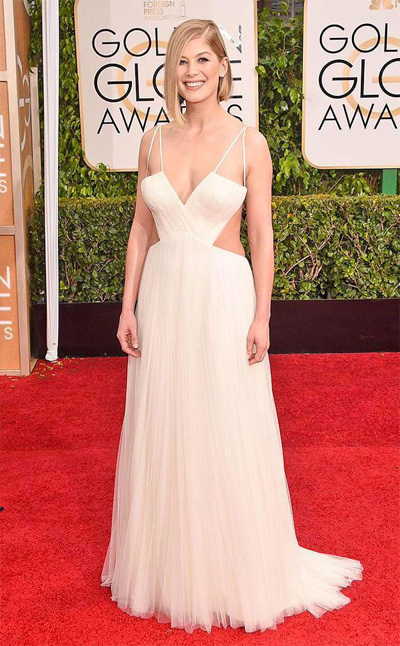 And THIS! Yowza miss Fonda!

How the heck is #JaneFonda 77 years old? Seriously the BEST dress of the night of any lady of ANY age! #GoldenGlobes pic.twitter.com/I4tE6ByAy3

The bold one in magenta is the winner

BEST PICTURE (drama)
Boyhood
Foxcatcher
The Imitation Game
Selma
The Theory of Everything
…
I’m gonna reserve my comment on Boyhood win until I actually see the movie! Lots of strong contenders in this category.
…
BEST PICTURE (comedy/musical)
Birdman
The Grand Budapest Hotel
Into the Woods
Pride
St. Vincent

>>>
I guess I should bite the bullet and just see Boyhood soon. I don’t know why but I haven’t been enthused about it apart from my curiosity on how Linklater pulls off that 12-year filmmaking process. I sure hope I’d enjoy it!

…
I was hoping Gillian Flynn would get this for Gone Girl, but I REALLY like Birdman and any win for that film is all right by me.

…
I actually LOVE three of the nominated animated movies equally (Big Hero 6, HTTYD 2 and The LEGO Movie), but I really thought The LEGO Movie had the biggest shots amongst the nominees.

…
I’m bummed that I haven’t seen Eddie’s nor Jake’s performances by now. But there’s really a ton of amazing transformative performances in this particular category.

…
Obviously I’m thrilled to see Keaton win! I mean he absolutely deserved it and he’s paid his dues time and again. I sure hope this isn’t just a one time thing, hope his comeback means more leading roles for him in the future!

…
I’m seriously bummed to see Rosamund NOT winning this. No offense to Julianne Moore as she’s a good actress, but I hope Rosamund still has a chance at the Oscars! But hey, at least Reese Witherspoon didn’t win for her overrated performance, I mean she shouldn’t even be nominated in the first place. Where the heck is Marion Cotillard?? She’s got not one but TWO worthy performances this past year (The Immigrant, Two Days One Night).

…
Haven’t seen Arquette’s performance either, but at this point, I’m happy that ANYONE besides Meryl win this thing!

…
Sheesh, the ONLY one film I haven’t seen in this category won this thing!! It’s a really tough category though, I mean three of the nominees here are on my Top 10 Best 2014 Scores.

Tina and Amy don’t waste any time on the insults! #EWGlobes #GoldenGlobes pic.twitter.com/bHkhM4QQgW

“North Korea referred to ‘The Interview’ as absolutely intolerable and a wanton act of terror. Even more amazing: not the worst review the movie got.”


LOVE the jab on Steve Carell …

His expression when the camera closes in on him is such a hoot!! LOVE this guy, he’s just so effortlessly hilarious & affable.

The hosts listing a long list of accomplishments of George Clooney’s new wife Amal Alamuddin who’s a human rights lawyer, then said, “And now her husband is getting the Lifetime Achievement Award.” Mwahahaha!

…
They might not be the most glamorous, but Anna Faris & Chris Pratt is absolutely my favorite couple! They’re just so genuinely adorable together!

Anna Faris: We have a mixed marriage. I’m CBS, he’s NBC.
Chris Pratt: But we want our kids to be HBO.

OMG how the heck did I just realize two HULKS are nominated tonight?! LOVE them both #MarkRuffalo #EdwardNorton #GoldenGlobeAwards2015 — FlixChatter (@FlixChatter) January 12, 2015

So bummed neither one of them win 😦
…

The WOULD YOU RATHER joke should be used every year!

Tina: “Who would you rather: Colin Farrell or Colin Firth?”
Amy: “Farrell, all day!”
Tina: “Firth, for a polite amount of time.”

Amy: “You know, Tina, I didn’t like Gone Girl. I go to the movies to escape. I didn’t want to see myself up there on the screen.”

I’d agree with that… especially in THIS outfit 😉

///
King of Photobomb Benedict Cumberbatch is at it again!

‘No one want to see me insult any of you rich, beautiful, overprivileged celebrities’

“Famous people are above the law, as it should be. Streep. Clooney, I’m not even looking at Katie Holmes.”

Kevin Spacey – “This is only the beginning of my revenge!”

Michael Keaton – His speech has a great balance of being genuinely moving as well as funny, just like the actor himself who’s great at mixing drama & comedy!

I’ve never been a huge fan of George Clooney, so here’s my thoughts on his Cecil B. DeMile Award:

#GeorgeClooney pretty much just plays himself in most films, but I gotta admit he’s REALLY good in #MichaelClayton #GoldenGlobes

“Big ones do fine, it’s the little ones that need an audience” Nice nod to small indie films, George! #GoldenGlobes #GeorgeClooney

George Clooney: “It’s a humbling thing when you find someone to love.”

I like that he knows how to poke fun of himself #MonumentsMen & acknowledging his brand new, gorgeous wife! #GoldenGlobes #GeorgeClooney

“You’ve got the Globes too” ??? WOW that is just tacky, Jeremy Renner. #GoldenGlobeAwards2015

…
Most awkward jokes of the night

The whole gag on North Korea with Margaret Cho dressed as the appalling dictator is just awkward and frankly, it’s just not funny! I cringed every time she’s on and I think the two hosts tried their best pretending it’s a good joke. It’s really getting tiresome to be honest, though the apparent jab at The Interview in the beginning is pretty spot on. I have to admit though, the Margaret & Meryl photo-op with Benedict photo-bombing them was pretty amusing.

Now, apart from my disappointments on who win/lose, overall I thought the event was pretty entertaining. Most of the jokes did make me laugh, and Tina/Amy did a great job as host once again. I’m not really sad this is their last year though, hey what’s wrong with getting some fresh talents to host?

Some people were suggesting Kristen Wiig & Bill Hader next year on Twitter. Hey I like them both, but hopefully they’d be funnier than they were last night as some of the jokes didn’t quite work too well.

Well, that’s it folks. As you can see, I’m only covering the FILM portion as I barely watch any TV 🙂

So, what are YOUR thoughts on the winners & what’s your favorite moments of the night?

45 thoughts on “2015 Golden Globes Coverage: Thoughts on the Winners + Best & Worst Moments of the Night”