Sir Ridley Scott maybe the most inconsistent successful film director ever, he first burst into fame by directing Alien in 1979 but made two big budget misfires a few years later, Blade Runner and Legend. He came back into prominence again in 1991 with Thelma & Louise, but the rest of his work in the 90s were mostly forgotten. Not until 2000 when he finally became an A-list director by making Gladiator and many of his films in that decade were very successful. He’s now back with another big budget period epic adventure, but unfortunately I think it might be one of his worst films.

Before I go into the review, I would like to note that I’m not a religious person so I don’t know the story of Moses, heck I’ve never seen The Ten Commandments so I went into this movie with zero knowledge of the subject.

In the Egyptian city of Memphis, the film introduced us to Moses (Christian Bale) and Rhamses (Joel Edgerton), they’re preparing to go into a battle and getting a blessing from King Seti (John Turturro) who also happens to be Rhamses’ father. Right away we get the feeling that there’s some kind of animosity between Moses and Rhamses and the King seems to have more love for Moses than his own son. During the battle, Moses saved Rhamses’ life and this somehow made him resent Moses even more. In the said scene, Rhamses was so offended he even considered killing Moses. After defeating their enemies, both Moses and Rhamses were heralded as heroes back in their hometown. Again King Seti seem to be more impressed with Moses than his own son, later on he told Rhamses to go and check up on a close by city because some of the slaves aren’t behaving. Not expecting to receive this kind of menial task from the king, Rhamses was not happy. So Moses volunteered to go instead. Upon arriving at the city, Moses met with the elders of the slaves including its leader Nun (Ben Kingsley). It’s here that Nun confronted Moses and told him that he’s a Hebrew and needs to lead his people to freedom. Of course Moses didn’t believe a word of what Nun said. I think anyone who’s familiar with the story probably already know what’s going to happen so I won’t go deeper into the plot of the movie.

Scott is known for being a perfectionist when it comes to how his films should look and here again his film looks spectacular. Shot natively in 3D, the effects were very immersive, but unfortunately he only included some few WOW 3D effects. So save yourself some money and see it on 2D instead. I haven’t mentioned about the plagues and the Red Sea parting scene because even though the effects were great, I wasn’t so into the movie so I didn’t even care about them. Aside from the visual aesthetics, the movie itself was kind of mediocre. For the first hour or so I thought this was made by a amateur director. The story narrative was all over the place and the editing was even worse. I’m quite sure we’ll get the inevitable longer “Director’s Cut” version when it comes out on video. I’m not quite sure of what he’s trying to say about the main leads, especially Moses. He started out as some kind of a non-believer but then out of nowhere became this savior who only answers to God. Maybe because I’m not familiar with the story and also a non-believer, I just didn’t buy into his transformation. For those expecting to see a Gladiator or even Kingdom of Heaven action style, you’ll be sorely disappointed. The movie contained one big action sequence but the marketing folks did a good job of promoting the movie as this non-stop action/adventure. 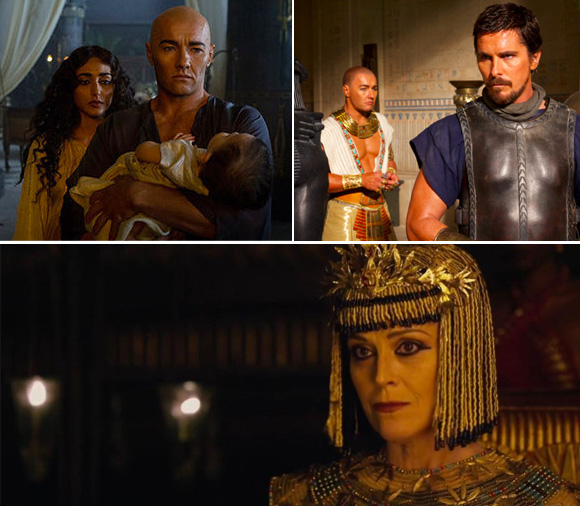 There’s been a lot of controversies when it comes to the cast, the filmmakers decided to cast mostly Caucasian actors in the lead roles. Truth be told, many of them look kind of ridiculous with heavy tanning and make up, especially Joel Edgerton. Personally I don’t have any issues with the casting, I mean this is a $140mil Hollywood produced movie and they need to cast some well-known actors to get their money back. Controversies aside, most of the actors were pretty good in their respective roles. This is a Christian Bale‘s movie since he appeared on the screen 90% of the time. Even though I thought the role was poorly written, Bale did what he could with the material. Edgerton was also good playing the “villain.” I don’t think I’ve seen him in any other movie except the atrocious Star Wars Episode 2. Here he played a pretty menacing character and he even outshone Bale in a couple of scenes they appeared together.

I’m pretty sure Sigourney Weaver must’ve been quite upset when she sees the final movie since she appeared on the screen for only about 5 minutes and spoke about 5 lines of dialogs. I’m guessing most of her scenes ended up on the cutting room floor. Ben Kingsley did a fine job as this Yoda kind of role. The oddest person in the cast here is Aaron “Jesse” Paul, he played this sidekick to Moses and I just thought he’s way out of his elements here. Another bad casting is John Turturro, he looks ridiculous in the weird make up and spoke with a weird accent that I wanted to laugh when he appears on screen.

For all the bad casting, writing and directing, the worse crime this movie committed was that it’s so boring! I actually dosed off a couple of times during the screening. This was yet another misfire from a director whose career may need to come to an end. I can forgive the bad editing and writing if the movie was entertaining, unfortunately it’s just a bad movie that can’t be saved even though it looks so good.

Have you seen Exodus? Well, what did you think?