Happy Monday everyone! Hope you all had a lovely Easter weekend.

I took a bit of a break from blogging this weekend, but this week has been pretty busy in terms of movie watching. It’s the last week of the MSPIFF 2014 and I saw three more films, one short of what I intended to see but fortunately there’ll be a press screening of Locke next Monday. As the film fest continues with Best of Fest screenings all week, there’ll be more reviews coming from both me and Josh 😉

Here are the three new movies I saw over the weekend:

I’ve blogged about All Things To All Men quite a while ago and finally it’s available on Netflix streaming. Remember how I always say some movies are well worth seeing just for the cast. Well, in this case, the ONLY thing worth seeing is the three actors: Toby Stephens, Rufus Sewell and Gabriel Byrne in that order [I’m having a serious crush on Toby, didn’t you notice?] Alas, the film itself left so much to be desired, and leaves me scratching my head why these actors signed on to do such a project. Did they lose a bet or something? I’m not sure I could even review it, but let me just say that unless you’re absolutely in love with any of the cast, I can’t exactly recommend it.

These two from MSPIFF, on the other hand, is well worth a look.

Rebecca is one of the world’s top war photographers. She must weather a major emotional storm when her husband refuses to put up with her dangerous life any longer.

This is one of those dramas that at times play out like a thriller. Even from the first moments when the protagonist is witnessing a ceremonial custom of an Afghan suicide bomber being prepped for self sacrifice, it’s quite an emotional roller coaster all the way to the very last scene.

For Rebecca (Juliette Binoche), covering the war is not just a job, it’s her way of life. When she comes home injured from Afghanistan, it’s apparent that it’s just as tough for her family to deal with her dangerous job. It’s apparent that her husband Marcus is constantly worried sick for Rebecca and this incident puts him over the edge which compels him to give her an ultimatum. It’s her family or her job. At first I felt that it’s not fair of him to do so, but as the film progresses, we’re shown how her two young daughters are dealing with her absence whilst she’s away in a war zone. It’s a tricky dilemma that I find myself grappling with as I watched this film. I read that this film is semi-autobiographical as Norwegian director Erik Poppe was a war photographer himself. No doubt this story is quite a personal one for him. 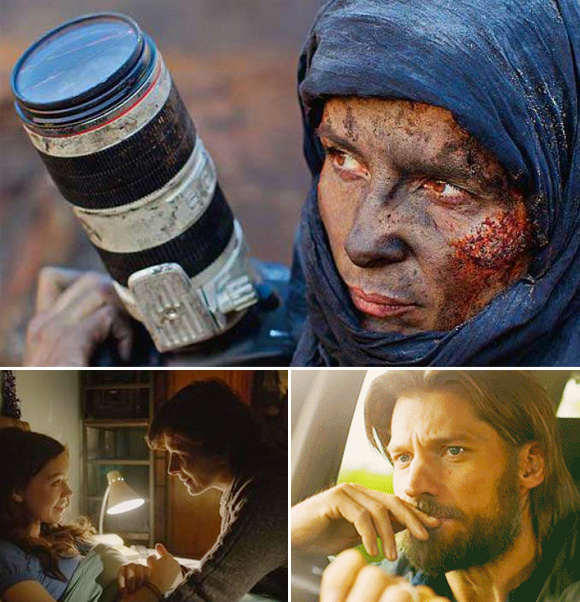 The main quibble I have with the film is the slow pace. I don’t mind quiet moments on film, but at times it felt a bit too indulgent that it threatens to grind the film to a halt. The metaphor of Rebecca drowning/suffocating by her life dilemma also grows repetitive. But the cinematography is simply stunning, nearly every shot is like a work of art. It’s also very atmospheric and the conflict felt genuine. The sense of authenticity comes from a committed performance from the always-reliable Binoche, as well as Nikolaj Coster-Waldau who plays her sensitive & caring husband. I’ve always been a big fan of Nikolaj from his short TV stint in New Amsterdam, long before he played Jamie Lannister in Game of Thrones, and he proves himself once again to be a capable and versatile actor. Lauryn Canny as Rebecca’s eldest daughter Steph is also quite good. When they’re in Africa, something happened that was quite traumatic for Steph. Some of the most emotional scenes in the film feature the two of them.

The heart of the film is no doubt Binoche. She conveys so much even in scenes where no words are spoken. This is the first of two films I saw her in and she’s absolutely excellent in both of these. There’s a certain aura of mystique about her that seems unreachable, and she’s very convincing as an fiercely idealistic woman. There is a fine line between bravery and recklessness and I think this film often blurs that line. There is a hint at the finale where Rebecca is back in Afghanistan that perhaps she’s a changed person after what happened between her and Steph, but the film lets us interpret that for ourselves.

An art instructor and an English teacher form a rivalry that ends up with a competition at their school in which students decide whether words or pictures are more important.

Romance that’s sparked out of rivalry has been done many times before, but with the right cast, it can still feel fresh. The pairing of Clive Owen and Juliette Binoche is what intrigues me about this film and they’re still the reason to watch to movie.

Owen is Jack ‘Mr Mark’ Marcus, a gifted English teacher at an upscale prep school. His best days as a published author seems to be behind him and he’s got a drinking problem. Perhaps that’s a result of his disillusionment with his life, as he seems to have lost his mojo, as well as in danger of losing his job. Meanwhile, a renowned painter Dina Delsanto (Binoche) has just been hired at the school. Her nickname is icicle for obvious reasons, but her coldness seems to also stem from her disappointment that she can no longer paint as much as she did due to her server Rheumatoid arthritis.

The two couldn’t be more different from each other, but as they say, opposites attracts. It’s fun to watch Owen in a softer role like this where he’s not firing a gun every two seconds, but his intensity is still there as he bud heads with the school principal and board members. He’s a deeply flawed character and in the most vulnerable moments, especially between him and his estranged son, is where I enjoyed his performance most. I wish the film would focus more on these two characters, as all the drama with the students are not as intriguing to me, and they don’t really add much to the story. The whole school competition of Words vs Pictures is more of a personal *war* for Marcus and Delsanto, and though it’s predictable that they’d end up together, it’s still fun to watch their banters. I personally like the pairing of Owen and Binoche more than him and Julia Roberts in Duplicity, which I find rather contrived. The only other actor I like in this movie is Bruce Davison as one of the more sympathetic faculty members.

Binoche is lovely here and it’s a testament to her versatility that she is also very convincing as a painter. I didn’t know that she’s an artist herself but in the credits I noticed that the Delsanto’s work is by Binoche, wow! I think out of the two films I saw last week, her dramatic chops perhaps suits something like A Thousand Times Good Night better. I like the idea of two broken people finding each other and to see a romantic film between people over the age of 40. Alas, I think the ending is almost as rough as Owen’s unkempt stubbles. Even the finale of the competition just didn’t have the oomph needed to make the story soar. Overall it’s an enjoyable dramedy though, eons better than a lot of the rom-coms are churning out these days. If you’re a fan of these two actors, this one is definitely worth a look.

So what did you see this Easter weekend? Anything good?