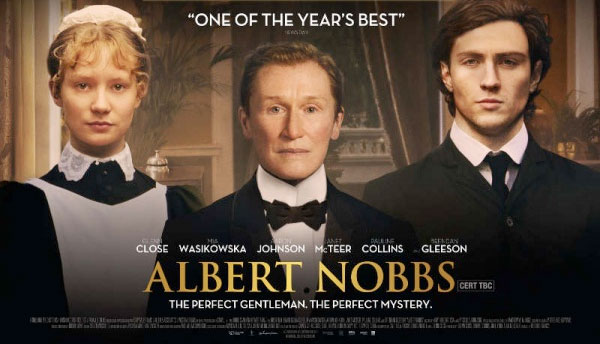 I actually stumbled upon Albert Nobbs as I was trying to find an interview with Janet McTeer about The White Queen on YouTube. I didn’t recall seeing any promotion for this film, but I listened to Glenn Close (Albert Nobbs) and Janet McTeer (Hubert Page) talk about transforming themselves into men for their roles. A woman pretending to be a man isn’t something new in cinema. For example, Gwyneth Paltrow pretended to be a man for a role in “Romeo and Juliet” in Shakespeare in Love; although, her transformation can hardly be considered life-altering. However, something about their interview struck a chord with me.

In essence, the casting was superb. Close has fairly androgynous features already, but the makeup and costuming efforts were incredible. Just looking at the cover makes my skin crawl! Throughout the entire film, Albert is statuesque, methodical and reclusive, but I think that’s the point. One could argue this is merely to protect her true identity, but I think it’s more than that. Albert Nobbs subtly implies women, during this era (19th century Ireland), are a means to an end and constantly stunted by the whims and fantasies of men.

Albert is a hard-working waiter at the Morrison’s Hotel, saving every coin, with the dreams of opening her own shop. However, she is so far removed from herself and her own person that she assumes the role of being invisible. It isn’t until Albert is introduced to Mr. Page do we see a spark a spark of life and emotion. Panic sets in once Albert realizes Mr. Page will be sharing her bed for the night, but we soon discover Mr. Page has a secret as well. Not only is Mr. Page* actually a woman, but also has a wife!

*To avoid confusion, I will always refer to Albert Nobbs and Mr. Page as “she.”*

Albert’s interactions with other people are so awkward and painful to watch, but the sympathetic Mr. Page slowly reveals secrets about her life and encourages Albert to live a full and happy life. Albert, determined to succeed, sets her sights on the charming, friendly and beautiful Helen (Mia Wasikowska). However, Helen has set her sights on the new handy-man, Joe (Aaron Taylor-Johnson). Joe schemes with Helen to milk Albert for enough money to buy the two of them passage to America.

It’s particularly heartbreaking to watch Albert, once again, be taken advantage of by men, but it also brings her such joy at the prospect of a life she chooses to live. As you can see from the image, below, Helen isn’t thrilled by the notion of “stepping out” with Albert. We soon discover, Helen is expecting, and the noble, self-sacrificing, Albert offers to marry Helen regardless. Disgusted at the notion, Helen refuses and chooses to believe the fantasy that Joe will provide for her and the baby. 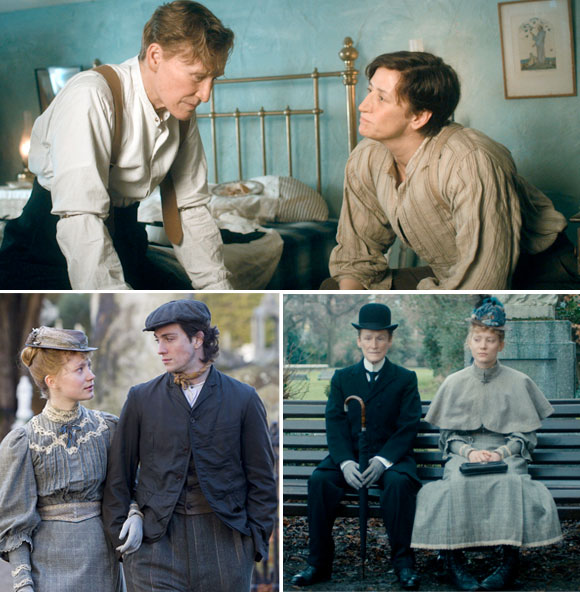 Just when you think the film can’t get any more depressing, a typhoid epidemic breaks out in Dublin. We learn Mr. Page’s wife (Cathleen) dies from the epidemic, but it brings about one of the more touching scenes from the film. In an act of remembrance, Albert and Mr. Page put on Cathleen’s dresses and solemnly, and somewhat bitterly, think of what their life might be like had they remained women.

I don’t want to give away the ending, but it’s definitely filled with mixed emotions. Researching the film revealed it received mixed reviews from critics in 2011, but, undeniably, Glenn Close and Janet McTeer’s performances were brilliant. Both actresses received Academy Award nominations in addition to Golden Globe Award and Screen Actors Guild Award nominations for their roles. I, too, will admit I didn’t love the film. In places it seemed to drag on, but it was interesting nonetheless. It’s definitely a one-of-a-kind film and I encourage you to rent at your leisure.

Thoughts on Albert Nobbs? Would love to hear what you think!