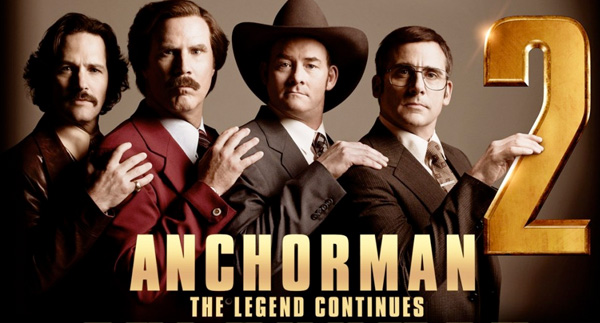 It took almost ten years for Ron Burgundy and his gang to come back to the big screen. Reportedly Paramount was nervous about green lighting this sequel even though the first one was a modest hit, but it didn’t earn enough to warrant a sequel. Well, after many years of stuck in production limbo, Burgundy and his gang of newsmen are back!

The action picks up a few years after the events of the previous film, Ron Burgundy (Will Ferrell) and his now wife Veronica (Christina Applegate) are living in NYC and working together as co-news anchors at a big news station in the city. One day both of them had a meeting with their boss, a well-known actor played this role and I won’t spoil it for you as to who it was but if you look it up on IMDB, you’ll know the actor. The boss decided to promote Veronica to be an anchor on the prime time slot and fired Burgundy. He also told Burgundy that he’s one of the worst anchorman he’d ever seen. After the meeting, Ron and Veronica got in a fight, he didn’t want her to accept the new position and gave her an ultimatum, it’s him or the job. Well fast forward a few months later, Ron is now back in San Diego working as a spoke person at some water park. He’s broke, lonely and pretty much have no desire to go on living. After a failed suicide, a new producer showed up and offered him a new job. He told Ron that he’s starting a 24 hours news station and that he wants Ron to be his main news anchor. Ron wasn’t sold on this 24 hours news idea but he’s broke and needed the money. He accepted the job and decided to get his old gang back together. The whole movie was about the adventures of Ron and his gang in the big city and all the silly stuff that you’d expect to see in this kind of movie.

Ferrell had no problem jumping back and play his alter ego Burgundy, in fact I thought he’s better in this film than the first. There were some laugh-out-loud moments, more so than in the first one I thought. I really enjoy the jab at the ridiculousness of cable news channels in our world today, especially one particular network (cough FOX News cough), even Burgundy’s boss is an Australian. The rest of the cast members did a fine job, although I thought there were too many scenes of Brick (Steve Carell) that weren’t funny but I since Carell is a bigger star now, he probably demanded more screen time. The film has a lot more cameos than the first, at the climax scene, there were who’s who of famous faces that showed up, again I won’t spoil it for you.

There were a few things that didn’t work for me. First, a love story subplot involving Brick and another simpleton who works at the station, Chani (Kristen Wiig), just felt force and went on a bit too long and just wasn’t that funny. Then there’s another plotline in the middle of the film that was never fully developed and they just sort of wrapped it up towards the end of the movie. The antagonist of the film, another famous anchorman Jack Lime (James Marsden), was made out to be Ron’s main competitor but sort of fade into the background in the rest of the film. Lastly, the film could’ve been trimmed by at least 20 minutes or more, a 2 hours run-time for a comedy is way too long.

Overall though I thought this new adventure of Ron Burgundy was a lot of fun and fans of the original will enjoy it as well. I think I laughed more in this film than the first one and I have to confess, I thought the first one wasn’t that funny when I saw it in theater. But after watching it many times on DVD, I became a fan. Well for this one, I became a fan instantly so I guess it’s better than the first one. This one comes highly recommended and if you’re in the mood for a good comedy, you can’t go wrong with this one.

What do you think of Anchorman 2? Was it a big deal for you?