Last week I took part in Mettel Ray‘s BREAKING EMOTIONS blogathon on Tears and Surprise. Check out my entry if you haven’t already. It was a lot of fun to do so naturally I’m game to do another one. Now the emotions for this week are …

Continuing with the theme of two opposites, this week’s first emotion is SMILES – now, I had put down laughing at first but again, I’m a bit of a weirdo and I ended up liking the word smiles a bit more. But the idea is still the same, I’m looking for scenes that have made you laugh and smile in the most happiest way possible. May it be the two lovers finally coming together, may it be a dog or a cat being all cute – everything positive and joyful will be suitable for this emotion.

Second one is a bit more dangerous and it’s that THRILL one gets watching a movie, it’s that inner excitement (again a word I wanted to use but it was too long) that will get you on the edge of the seat. Maybe it’s an explosion or a car chase or just the villain entering the building, what scene gets your blood going with adrenaline while sitting in the theater or at home. The dictionary I have says that thrilling itself means shaking, so, what makes you shake in awesomeness with a word “wow” running through your mind.

It should be obvious for posts like these, but just in case, if you haven’t seen any of these, BEWARE OF SPOILERS!

Ok, so here are my picks:

Casino Royale – Bond and Vesper’s banter in the train

I absolutely adore this scene! It’s one of my favorites even amongst the dozens of Bond movies I’ve watched over the years because for once Bond is genuinely dazzled and stirred by a woman’s intellect as well as her beauty. Vesper barely revels any skin in this scene, but yet she oozes sex appeal. Vesper ‘overcompensates by wearing slightly masculine clothing’ as Bond puts it, and later the table is turned as Vesper nonchalantly makes a sarcastic remark about Bond’s ‘perfectly formed ass.’ It’s a stimulating banter that Daniel Craig and Eva Green performed with aplomb. Such a fantastic scene that never fails to bring a smile to my face every time I watch it.

How to Train Your Dragon –  a touch of friendship

I always love stories of unlikely friendships and there is nothing more unlikely than a little boy and a dragon. Toothless is unbelievably adorable that I wish I could have one as my own pet! The scenes where Hiccup slowly gets to know the Night Fury dragon are the best, especially the drawing scene … Toothless is trying to draw Hiccup using the tip of a tree branch and as Hiccup walks closer to him, Toothless makes a gesture ‘don’t step on the line!’ The moment Toothless lets Hiccup’s hand touches his face is so sweet and deeply moving, it’s as if Toothless gestures to him ‘I trust you now.’ John Powell’s score makes the whole scene even more awesome!

The last 20 or so minute of this 2.5-hour film with John Rolfe and Pocahontas brings such joy to me as I LOVE the tentative relationship between the two. It’s such a contrast to the more passionate yet tumultuous relationship between her and Captain Smith. After Pocahontas married Rolfe and goes to England, the supposedly-missing Smith was able to track her down. Rolfe lets his wife goes and meets him, though in one scene Rolfe is shown to be in torment, perhaps fearing the worst that his wife would leave him now that Smith is back. 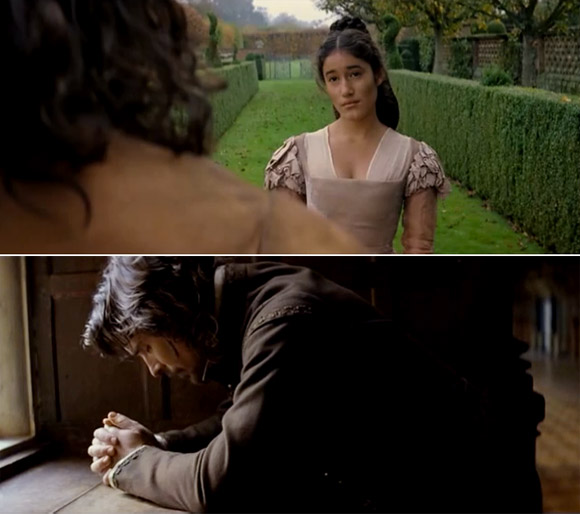 The way Terrence Malick sets up this scene is just brilliant in its minimalism. There’s barely any words spoken but the body language speaks volumes. The moment Pocahontas (Q’orianka Kilcher) catches up to Rolfe as she walks back into the house, she just hugs his left arm from behind, clutching it so tight as if to say I’m here… with you… and nothing would keep us apart. Rolfe’s subtle reaction when she does this is priceless… he pauses as if he couldn’t believe his luck. It wasn’t a celebratory reaction where he suddenly takes her in his arms and kiss her or anything like that but it’s apparent that he’s ecstatic…  It’s apparent how much Rolfe loves his wife, and the fact that she now has chosen him after all must’ve brought such indescribable euphoria. Though it’s a small role, I consider this one of my all time favorite Christian Bale performance… I wish he’d do more romantic roles like this one!

Now for this emotion, I decided to forgo any kind of ‘chase’ scene, be it car, boat, planes, horse, what have you. I might actually made a separate list specifically on thrilling chase scenes at some point 😉

You don’t always need an action scene to create a thrilling sequence. This opening scene is basically just two people sitting on a table talking… but the way this interrogation scene is set up is so darn intense that my nerves was stretched to its snapping point. Col. Hans Landa is a rather soft-spoken Nazi officer but his polite mannerism actually makes it the scene all the more suspenseful! It’s the quintessential ‘edge of your seat’ scene that had me gripping the arm rest and my poor husband’s arm. The bar scene in this movie qualifies as well, but I chose this one as I like the sheer simplicity, but yet so meticulously-crafted to maximize its impact.

Jurassic Park – We’re back in business!

There are SO many thrilling scenes in this film that it’s really tough to choose from. I was going to put the Raptor in the Kitchen scene as that one was unbelievably gripping, but I like that this one was going back and forth between the Laura Dern’s character Ellie trying to get the electricity back on and her husband Alan (Sam Neill) with the two kids as they’re climbing the temporarily-off electric fence!! I couldn’t sit still watching this scene, and when you think things are under control — ‘We’re back in business!’ — your worst nightmare just jumps right at you! Spielberg is relentless in piling up thrill after thrill here that still holds up even 20 years later.

Even though I know full well Tom Cruise is not going to plunge into his death, this scene still makes my palms sweaty! Far more gripping than any car/chopper/train/boat chases Agent Ethan Hunt’s ever been involved in the previous three movies. Now THIS is worthy to be called Mission Impossible and Cruise is such a daredevil actor himself that he actually did his own stunts! It never fails to give the ultimate adrenaline rush every single time I watch it, makes me wish Brad Bird is back doing MI-5 again!

What do you think of my picks? Which scenes would YOU pick for smiles and/or thrills?