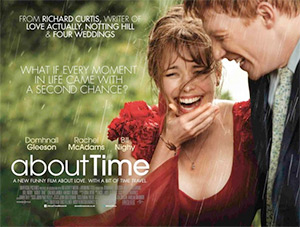 I haven’t done a Music Break post in a while but today I might as well hit two birds with one stone to highlight Richard Curtis. Today the British writer/director turns 57 and his time-travel rom-com About Time starring Domhnall Gleeson & Rachel McAdams opens today in the US as well, so I thought why not highlight some of the music from his films.

You could say Mr. Curtis is the King of British Rom-Com, he’s also the man behind great comedic shows like Blackadder and The Vicars of Dibley (my personal fave). He often works with Rowan Atkinson (Mr. Bean) and Hugh Grant, in fact, all of the films I highlighted here have Grant in them! His films are quintessentially British, filled with wacky British humor and cultural references which I really enjoy, but another thing I love about his movies are the great soundtracks.

Here are five from some of my favorite movies written/produced by Richard Curtis:

I’ve never even heard of Elvis Costello’s music before this one but I LOVE, LOVE this song and I like how it plays in the beginning to sort of introduce Julia Roberts’ movie star character. It has such sweet, melancholic melody that

…
Ain’t No Sunshine When She Goes Away – Notting Hill

The song choice is just perfect for this scene, it’s as if R&B star Bill Withers knew exactly what broken-hearted William (Hugh Grant) is thinking at this moment as he goes through each season missing his sweetheart Anna. I’m not a huge fan of Hugh Grant generally but too is perfect for this role.

Love is All Around – Four Weddings & A Funeral

I remember playing this song over and over when this film first came out. The song was originally recorded by The Troggs but in this soundtrack it was performed by Scottish band Wet Wet Wet. Apparently it was so popular it remained at number 1 in the British charts for fifteen weeks and was then the ninth biggest selling single of all time in Britain (per Wikipedia). Playful and romantic, just like the movie!

There are a lot of great themes in this film, I also love the Glasgow Theme but this one has such a swooning quality about it but not in an overly sappy way. It has such a rousing and ‘stately’ feel about it too that fits the fact that Hugh Grant’s character is a British state leader.

I initially didn’t realize that this song’s part of Bridget Jones’ Diary. I LOVE it, it’s so my kind of music as I was just telling Michael and Jack in this awesome music post. I had no clue that swing jazz is Robbie Williams’ genre, I thought he’s more of a pop star. Originally sung by Sinatra, of course it’s tough to beat the real deal, but still, it’s a lovely song that I can listen to over and over.

Hope you enjoyed the Music Break. Which Richard Curtis’ movie(s) are your favorites?