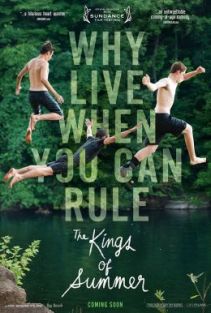 I almost lost my opportunity to see this movie on the big screen. I was invited to a screening by TCFF a few weeks ago but I couldn’t make it as I wasn’t feeling well. But thankfully, I was able to make it to this press screening and boy, am I glad I did!

This film definitely reminds me of Stand By Me which I saw ages ago. Two best friends Joe & Patrick desperately trying to escape their families and they spend their Summer building a house in the woods and living off the land. The third guy Biaggio, ended up joining them as Joe ‘didn’t know how to get rid of him’ ahah.

I immediately connected with the characters, especially Joe (Nick Robinson) who lives with his overbearing widower dad Frank (the hilarious Nick Offerman). His BFF Patrick (Gabriel Basso) also live with his insufferable parents (Megan Mullally is a hoot as his overprotective mom – oh btw, I just learned today that she & Offerman are real-life married couple!). Both parents are harmless really, but I could see why their um, parenting style drive the kids away from home. And one night after Joe got lost in the woods after a party, with an oddball schoolmate Biaggio in tow, found just the perfect place to escape to.

This movie is billed as a comedy and it’s certainly has some laugh-out-loud moments, but it’s surprisingly heartfelt as well. For all of us who are young at heart, this film is quite relatable and also brings back memories of our youth. The scenes of the three teens trying to survive in the woods and wanting to prove that they’re capable ‘men’ not boys are both moving and funny.

I’m glad to see an indie film that paints an earnest picture of teens and the struggles of adolescence without resorting to something sinister or somber.  I mean, there are dark moments but by no means bleak. It’s also not overtly sexual, which is very refreshing for a teen film (though it is rated R for the foul language). Even the romance storyline is handled quite well here. It’s not frivolous or gratuitous and fits well with the coming-of-age theme of the story.

This is director Jordan Vogt-Roberts‘ feature film debut as he did mostly TV work, but I hope he does more movies in the future. This is one of the funniest and refreshingly honest films I’ve seen, boasted by engaging performances and beautiful cinematography that makes you want to book your next vacation camping in the woods!! [If you know me at all, that’s saying a lot as I’m not even an outdoor person]

I love movies with memorable characters, and this film is chock full of them. The younger actors are wonderful, they don’t seem as if they’re acting at all, which is impressive in its own right. I’m especially impressed with 18-year-old Nick Robinson as Joe, and this is also his debut feature film! He’s quite a natural on screen, and you could say he’s the protagonist of the film.

Moises Arias as the quirky Biaggio is a hoot and practically stole every scene he’s in! Those who watch Park & Recreation no doubts would be entertained by Nick Offerman and his deadpan comedic style. His scene with the delivery guy about some large wontons had me in stitches!

I can’t recommend this enough, folks. I hope you get a chance to see this one the big screen or at the very least give it a rent. It’d likely end up in my top 10 of 2013. It’d make an excellent diversion to the big blockbuster Summer movies hitting theaters in the next few months. Great script, performances, scenery and soundtrack — it’s got all the ingredients to make an entertaining film. But mostly, watch it for the funny and engaging story of friendship and family.

This film was nominated for this year’s Grand Jury Prize at Sundance. I’d think it might even deserve to win more awards!

Anybody else’s seen this yet? What do you think of this film?

43 thoughts on “Indie Review: The Kings of Summer”