Having enjoyed a brief respite from double features and the career and filmography of Walter Matthau. I return refreshed and relaxed from a rather intriguing sojourn around The Sundance Channel. Indulging in their wares and finding their menu to be of very high and discerning quality. Providing all three delectable courses of the original, much written about and critiqued “Millennium Trilogy“of films.

Centering around a disgraced journalist. Mikael Blomkvist. Desperate to get his and his magazine’s reputation back after a three month sentence and large fine for losing a libel case in 1992 against financier and billionaire, Hans-Erik Wennerström. Taking on a job of historic research in the case of a girl who has been missing since 1966. And in need of someone who is better at over turning ancient rocks and investigating than he is. Someone with mad skills, who has already hacked into his laptop.

Lisbeth Salander, by name. (Marvelously subtle and underplayed, Noomi Rapace!) Possessing a more than tragic past. Institutionalized and judged mentally incompetent since childhood for trying to immolate her abusive, wife beating father. Lisbeth has inner demons writ indelibly large. An ultimate Outsider with very few social skills, because she has never had time to develop them. Living hand to mouth from a monthly, miserly stipend provided by a sadistic sick puppy of a guardian and lawyer, Nils Bjurman (Peter Andersson. As fat and ugly on the outside as in!). Lisbeth seeks to be free. And is not above using means fair, foul or underhanded to achieve it.

Though to aid in achieving it, Lisbeth needs a better paying gig than her present one of providing Cyber Security, cameras and the like for people and businesses above her social standing. One that can utilize her voracious appetite for knowledge, histories, research, all things digital. And her photographic memory.

Her meeting with Blomkvist (Michael Nyqvist. Brooding, hungry and oddly ruggedly handsome) and those proposing the “Historic Whodunnit?!” involving a missing girl from the 60s goes about as well as expected. With Lisbeth unearthing and presenting tidbits about the secretive, well do do Vanger family in question. As well as some naughty bits of gossip about the company footing the bill. Not exactly a match made in Heaven. But one that intrigues and pleases Blomkvist.

Lisbeth dives deep into research. When not arranging another assignation with Bjurman for dwindling funds from a recently purchased and secreted digital camera. Which is used to great value as the lawyer goes a bit Medieval in regards to his sexual proclivities.

Meanwhile, Mikael travels far outside Stockholm to the Vanger estate .About ten minutes away from the small island town of Hedestad, which hasn’t seemed to have evolved into the 21st century. All rustic as hell and lovely to look at. But basically, the dark side of the Moon in regard to technology, tower signals and anything else a investigative reporter may need. Oh, there are people to interview. The Vanger family. The missing girl, Harriet’s Anti Semite brother, Martin (Played to creepy, arrogant perfection by Peter Haber). And older, even more vile cousin Cecilia (Marika Langercrantz, who should be adorned in National Socialist gray or black). Who has no time for people in general. And even less for Mikael. Speaking in roundabout riddles and non answers as journals and photo albums and other documentary grist are offered up for Blomkvist to digest.

Lisbeth has been equally busy dissecting Harriet’s diary. Where she finds a loose thread to tug. That opens up a skein of other missing and murdered girls dating back to the 1950s. All with Jewish names. That fits with pronounced and underlined verses from Leviticus. And allows some time for Lisbeth to get some substantial payback on her guardian, Bjurman. Arranging a meet that finds Bjurman tasered, seriously restrained and at the mercy of his and the state’s vengeful ward. Lisbeth lays down the new ground rules while tattooing Bjurman’s chest with the message” “I am a sadistic pig and a rapist”.

Bjurman is to open up all access to Lisbeth’s collected trust. And only glowing reports about her “progress” are to be made to his higher ups. Period. No negotiation. And Bjurman will be monitored to make sure his new tattoo is NOT removed. Or she will be back!!!

Satisfied for the moment, Lisbeth travels to the Vanger estate to fill in Mikael on her progress regarding Harriet and the earlier missing girls. Mikael talks to the town’s retired police detective and learns about “Children’s Day” in 1966. The last time Harriet was seen alive. Mikael rents a flat from which a group of photos conating Harriet and other girls were taken that day. And Lisbeth sets up video security on their estate digs. When not backtracking Wennerström’s finances, diversifications and slowly revealed, many off shore accounts. With that information put aside, Lisbeth gains access to the archives of the Vanger family businesses. While Mikael focuses on Martin’s reclusive brother, Harald. Who, along with Martin shared an unsavory reputation around Hedestad. Deeper investigation reveals a time line that not only includes Martin, but his long deceased father, Gottfried.

Harald is looking more and more like the guilty party. And Mikael breaks rather clumsily into his home. Harald intervenes and Martin arrives like the cavalry to save Mikael’s bacon. On the way back to Mikael’s digs. Mikael talks a bit too much and his words come a bit too close to home. Martin drugs Mikael. Drags him back to his well equipped basement to indulge in his own murderous form(s) of adult entertainment. While Lisbeth returns back to the estate. Finds Mikael missing. Checks the video feed and sees Martin carrying something large and body like into the night’s shadows a short time earlier.

While Lisbeth hurries to Martin’s house. Mikael finds himself bound. Suspended and choked from the basements low ceiling. Listening to Martin detail the number of young girls killed by at first, his father’s. And later, his hand. Martin waxes so poetic and nostalgic about the people in numbers he can’t remember. Lisbeth slinks downstairs and catches Martin between the shoulder blades with a seven iron. Gets a few licks and kicks of her own in before Martin runs away.

Lisbeth frees Mikael and gives chase on her motorcycle after Martin’s disappearing Land Rover. Weaves in and out of traffic until Martin catches the corner of a semi trailer full of lumber. That sends the Land Rover careening and tumbling. And leaves Martin pinned upside down and helpless behind the wheel as gasoline drips onto licking, flickering flames as Lisbeth draws close and watches…

As with all decent films and long running evening soap operas. All is revealed in the last fifteen minutes. Yes. Harriet went missing after the Children’s Day celebration. Though the photo of so much attention is of Cecilia’s younger sister, Anita. Also young, blonde and beautiful. Who helped Harriet escape the sexually abusive hands of her recently murdered (Boat oar upside the head. Drowning) and disgusting father, Gottfried. And the lecherous habits of young Martin. Who had witnessed the event.

Blomkvist tracks Harriet down in the wild open Outback of Australia. Having lived for years under Anita’s name. Harriet fills in the details of the rapes and abuse of her at familial hands while flying back to Stockholm. And a reunion with the only decent Vanger on the planet. Her uncle, Henrick.

While Blomkvist is tying up loose ends. So is Lisbeth. Traveling to banks far and wide in a blonde wig and high fashion. And raiding them more than enough for a full blown, no holds barred investigation of Wennerström’s corporate graft and corruption. All duly noted by the little seen (In this film. Much more in later tales) staff of Millennium magazine. Capitalizing on details and sensation and putting themselves in a higher strata than before.

Now. What Makes This Film Good?

A director, Neils Arden Oplev whose pedigree is nearly solidly television. Taking on a rather large and sweeping story of an original novel by Steig Larsson (Whose original title was: Men Who Hate Women). And giving it the maturity and attention to detail and often graphic and off putting topic like this demands. And yes, this is “Adult Material”. And may not be everyone’s cup of tea as deeply buried stones are unearthed, turned over and their brutal, vile histories revealed. 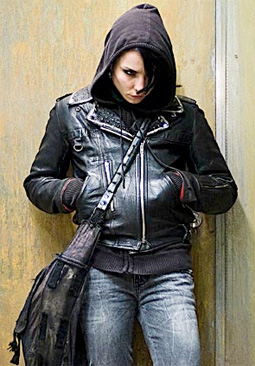 Into this morass steps Noomi Rapace‘s Lisbeth Salander. Her arms tucked in close in defensive solitude. Her head down, often under a baseball cap and hoodie when plying crafts better made anonymous and near invisible in a crowd. Sometimes maintaining a forward leaning posture when reading her notes and half expecting a challenge. Keeping her inner demons in check through body language subtle and pronounced. Lest those demons escape through her appendages and fingertips. Ms. Rapace is an absolute wonder to watch. As she holds the camera’s attention and allows you to glimpse those demons.

Michael Nyqvist is no slouch either. Far less worldly and much more blue collar than Daniel Craig in the later, David Fincher directed, American version. Looking more like a failed, former boxer or rugby player than a investigator and newshound. Who makes mistakes. Sometimes says too much when he shouldn’t. And not enough when he should. Helping cinematographer Eric Kress keep an even strain and tension in the slow excavation of viable names, locations and dates from the obfuscations of those he’s interviewing.

Attention must be paid to the dialogue and its subtitles as well as the full pallet of less than friendly, desirable and arrogantly untouchable Vanger family. And the pompously smug bureaucrats who briefly interface and believe they hold sway over Lisbeth. Their day of reckoning occurs later in The Girl Who Kicked The Hornets’ Nest.

A story worthy of a top budget and A-list director told on a smaller, more manageable scale. With the deft and liberal use of darkness, shadows and cramped cityscape in and around Stockholm. With an added layer of isolation when trekking out to the island city of Hedestad. Where the Vanger family lords over all and prefers that their secrets remain secret.

The film also plunges deep and sloshes around with the patent patriarchy instilled in a culture separated from most. And never being called on their behavior and never been told “no!”. And even with a running time of 152 minutes. One might think patience is a requirement. Though with superior editing by Anne Osterud, time flows smoothly, seamlessly and only a minimum of lost time and over long scenes. All moved briskly along with original music by Jacob Groth.

Extremely high marks to Tusse Lande, Jenny Fred and Cilla Rorby for casting so many well made up evil and dressed people. And, as with any origin story in a series of stories. Those mentioned here will also figure prominently in The Girl Who Played with Fire and The Girl Who Kicked The Hornets’ Nest.

Thoughts on this film? Let it be known in the comments.

49 thoughts on “FlixChatter Review: The Girl With The Dragon Tattoo (2009)”