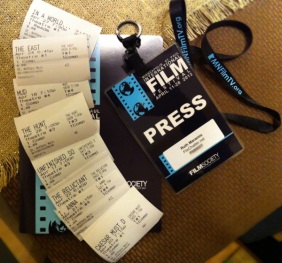 Happy Monday all! It’s going to be quite a busy week for me with three screenings Tuesday – Thursday, starting with Disconnect tomorrow. I’ve got my MSPIFF press pass kit yesterday and all the tickets for the films I’ve mentioned here, well except for Kon-Tiki as it was sold out and the second screening conflicts with another film. I was thinking of going to the Screenwriters Panel but this stupid Wintry weather kept me from going. Seriously, there are icicles forming on my roof as I type this. We seem to be going backwards!! [sigh] In any case, here’s my viewing schedule this week:

It’ll take me some time to review them all so this week we’ve got a couple of special guest posts on schedule, so stay tuned! Anyway, here’s my mini review of the one film I managed to see this weekend:

Mere seconds before the Earth is to be demolished by an alien construction crew, journeyman Arthur Dent is swept off the planet by his friend Ford Prefect, a researcher penning a new edition of “The Hitchhiker’s Guide to the Galaxy.”

My hubby and I didn’t originally set out to see this one but it’s one of those movies we’ve been curious about for some time as it’s such a pop-culture phenomenon. Truth be told, I don’t know anything about the story, though a short stop at Wikipedia revealed that it’s a comic sci-fi series created by Douglas Adams, which started out as a BBC comedy radio program in 1978 and later adapted to other formats, including novels, TV series and the 2005 movie. When I saw the cast, Martin Freeman, Sam Rockwell, Bill Nighy, John Malkovich, PLUS Alan Rickman & Helen Mirren‘s voice, I was more than intrigued! It has the vibe of the wacky sci-fi comedy Galaxy Quest, one of my fave comedies ever, but I think is still far more enjoyable than this one. Now, it started out very promising, with the hilarious narration about how the dolphins has been trying to warn humans of their impending doom but they’re mistaken for playful tricks, hence all the dolphin shows in Sea World. The song So Long and Thanks for All the Fish that the dolphins sing before they leave earth is such a hoot and fun to watch. Then we meet a hapless Englishman Arthur Dent — Martin Freeman can portray utter bewilderment like no other — who wakes up to all the ruckus outside his home as it’s about to be demolished. As if that wasn’t a bad enough morning, his friend Ford Prefect (hip-hop artist Moss Def) tells him he’s actually an alien and earth is being destroyed in a matter of minutes! Before you know it, Arthur is whisked away by Ford, by hitching a ride to a spaceship (natch!), and they embark on a madly bizarre adventure!

I could see how this story would become so popular, not just people who grew up listening to the radio show, as my hubby’s colleagues often reference this movie. Even Apple’s Siri refer to this giant computer Deep Thought’s answer, the number 42, when asked about the meaning of life. There are certainly some amusing parts in this film, the segment with John Malkovich as a seriously outlandish religious leader with mechanical spiders for legs and Sam Rockwell’s flamboyantly over-the-top portrayal of Zaphod Beeblebrox (I guess with a character name like that one can’t exactly underplay it, ahah) are certainly amusing. Overall though, the pacing is just off, it could be because director Garth Jennings’s lack of directorial experience. On top of that, I just didn’t connect with the story as I found myself falling asleep midway through, and didn’t wake up until Bill Nighy‘s Slartibartfast, the planet designer, gave Arthur a tour of the galaxy. Unlike Galaxy Quest where I was caught up in the characters’ journey, this one sort of become tedious over time, I’m sure the radio show/novels are far more interesting. Most of the characters, while amusing at first, just aren’t really that interesting after all, which is a shame considering the talents involved. Freeman basically playing a similar character as Bilbo in terms of being out of his comfort zone, as he’s pretty much dumbfounded and perplexed for most of the movie. I do love Marvin the Paranoid Android, he’s perhaps my favorite character of the movie, largely thanks to Alan Rickman‘s voice! I don’t know how this guy managed to be entertaining just by lending his voice alone, but all the sarcastic quips of the manically-depressed robot are truly the best lines of the movie!

Marvin: You can blame the Sirius Cybernetics Corporation for making androids with GPP… Arthur: Um… what’s GPP? Marvin: Genuine People Personalities. I’m a personality prototype. You can tell, can’t you…?

Arthur: I think that door just sighed. Marvin: Ghastly, isn’t it? All the doors on this spaceship have been programmed to have a cheery and sunny disposition.

Marvin: Freeze? I’m a robot. I’m not a refrigerator.

So even though I didn’t love this movie, I’m glad I finally saw it so I know when people make references to this story. I probably won’t rewatch the movie but I definitely would rewatch all the hilarious Marvin moments, courtesy of youtube.

Fun Trivia bit: The movie was first optioned in 1982 by producers Ivan Reitman, Joe Medjuck and Michael C. Gross. Douglas Adams wrote three drafts for them per his contract. During this time, Medjuck and Gross were considering Bill Murray or Dan Aykroyd to play Ford Prefect, but then Aykroyd sent them his idea for Ghostbusters and they did that movie instead. [per IMDb trivia]

Well, that’s my weekend roundup, folks. What did you see this weekend, anything good?