I almost missed Russell Crowe’s birthday today. On April 7, the Aussie thespian turns 49. In case you didn’t know, before Gerry Butler, I was quite obsessed with the New Zealand-born actor after seeing his performance in Gladiator back in 2000. The following year, I tried to watch as many of his older films as possible, including his obscure Aussie movies like Heaven’s Burning and Proof, and his early Hollywood role in the campy Rough Magic. Even in his slimmer days, Crowe is not exactly a matinee idol known simply for his chiseled good looks. I mean sure he’s a handsome fellow, but in a rugged, rough-around-the-edges kind of way… add to that the gruff voice and stern, piercing gaze, he’s as manly as they come.

I did a mini tribute of sort in 2010, spotlighting his superlative performance in The Insider. Samantha from Banana Oil Movies listed her top 5 Russell Crowe movies that same year, and in the comments I told her what my top five would be, but since I’ve seen nearly 20 of his films by now, I figure I’d rank my top 10 favorite roles from Crowe.

Ok, before I rank my list, I’d have to tell you that I haven’t seen his breakthrough role as a skinhead in Romper Stomper yet, somehow I just haven’t got around to it yet. I also haven’t seen Body of Lies and Les Miserables. Well, without further ado, here we go: 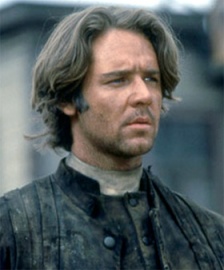 I’ve got to admit I saw this film for the first time for Leonardo DiCaprio, but it was Crowe’s hunky henchman-turned-reverend who made an impression. He had this sly smile the moment he entered the screen, that casual, nonchalant demeanor that Crowe pulls off so well. I think he’s never looked as sexy on screen as he was in his role as Cort, and he’s got such scorching chemistry with Sharon Stone. This movie was a flop though clearly it didn’t ruin the career of then-unknown actors as both DiCaprio and Crowe became superstars within five years after its release. This is not the greatest Westerns, but it’s still fun to see Crowe’s brooding performance and he’s easily one of the most interesting characters of the bunch.

9. John Brennan – The Next Three Days

Another underrated film from Crowe, as the film barely made up for even the low production budget of $30 mil. I actually got a free screening to this and I’m glad I got to see it. The crime drama centers on a married couple whose life is turned upside down when Crowe’s wife is accused of a murder. A lot of the time, Crowe’s the only one on screen in this thinking-man’s thriller. If you have seen the trailer, you’d probably think it’s a fast-paced thriller set in the vein of the Bourne movies, but as I said in my review, this film is more of a character-driven thriller anchored by Crowe’s excellent performance. He’s utterly believable alternating between a gentle, dotting dad and an unrelenting man-on-a-mission, it proves that Crowe can’t be pigeonholed into a certain type of actor. Elizabeth Banks also surprised me with her compelling turn in more serious role than what I’m used to seeing her in.

Based on a six-part British TV series of the same name that aired in 2003, this is another *quiet* role for Crowe that really showed his dramatic intensity. As a road-smart reporter probing into the suspicious death of a Congressman’s mistress, Crowe’s sporting a long-ish locks and he looks disheveled throughout the film, and he’s also sporting a pretty convincing American accent. It was originally a role for Brad Pitt, but I’m glad Crowe replaced him. Crowe portrayed the gutsy, stubborn reporter with sometimes questionable ethics with such aplomb, and not without with and humor. I quite like his banter with Dame Helen Mirren, and out-acting Ben Affleck, though to be fair, Affleck is suitable as the unscrupulous Congressman.

Ben Wade stands as one of my favorite charming bad boys, perhaps the only actor who could actually outshine the likes of Christian Bale. Now, don’t get me wrong, Bale was excellent as the good guy Dan Evans who’s escorting Wade to the 3:10 train to Yuma. But Crowe played the Bible-thumping outlaw in such a charismatic way you can’t help but root for the guy. I’d love to see Crowe played more antihero roles as he bring so much layer and complexity that’s far from being one-dimensional. The battle of wills between Crowe and Bale is the highlights of the film, which stands as one of my favorite Westerns I’ve seen so far. 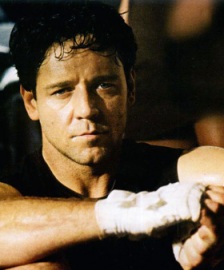 I think Crowe was robbed of an Oscar nomination here as Jim Braddock, a down-on-his-luck boxer who came back to become a champion during the Great Depression. It seems like a tailor-made role for Crowe that showcase his both physical and emotional strength as an actor. Portraying a real-life persona is tricky but I think Crowe was more than up for the task. The boxing stuff are incredibly-made, but the emotional scenes packed even more punch. The level of despair and extreme poverty presented in this film is visceral and gut-wrenching, and Crowe brought his A-level game to play this incredible unlikely hero. His performance made this film work so well, along with supporting performances from Renee Zellweger and Paul Giamatti.

Yet another biopic that earned Crowe his third Best Actor Oscar nominations. This film got much flak for winning Best Picture in 2002. Now, I don’t know if this film deserved its win over other nominees that include LOTR: Fellowship of the Ring and Gosford Park, but I do believe Crowe’s performance as a brilliant mathematician John Nash is Oscar-worthy. Portraying someone suffering through schizophrenia certainly takes an equally brilliant actor, and it’s a testament to Crowe’s talent that though the character descend into madness, he didn’t make the performance descend into some sort of caricature.

When I saw this on the big screen, I was amazed by how authentic Crowe’s performance was, as he didn’t so much rely on the makeup to make himself look like Nash, but his gestures, manner of speaking, his walk, etc. made the character so compelling to watch. His effortless chemistry with Jennifer Connelly is the emotional center of the film as well as provide some of the most hilarious scenes in the film. 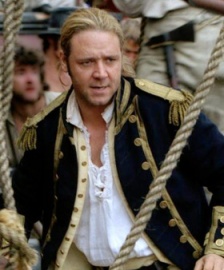 When I made my tribute three years ago, I haven’t seen this film. Well I finally did a couple of years ago and was blown away! I never thought I’d enjoy a film that takes place in a boat from start to finish, with zero romance or even a female interaction. But Peter Weir crafted such a fantastic historical drama during the Napoleonic Wars. Crowe played a strong and charismatic British captain who pushed himself and his crew to the limits. As the courageous and sympathetic Capt. Jack Aubrey, Crowe owned his role and is really the best thing to watch in this film and made the 138 running-time a worthwhile journey with nary a boring moment!

It proves that Crowe truly is one of the best leading men of the last two decades, as he commands your attention and respect every minute he appeared on screen, just like Capt. Aubrey commands loyalty and admiration from his men. I wish the two Aussies would work together again. A Weir-Crowe collaboration is one of my wish-list of director/actor reunions I’d love to see again. 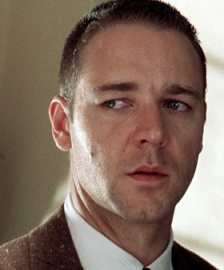 One of my favorite crime film noirs, Crowe played one of the three L.A. cops who were all investigating a series of murder in their own style. Bud White is the brute one of the three, and it’s interesting that the finest acting in this film came from the two Australian actors, Crowe and Guy Pearce. The interaction between the two is exciting to watch, as well as his romantic scenes with Kim Basinger (how’s she the only one nominated for acting, I’ll never know!). He’s a tender lover, but you don’t want to cross him… Bud’s reaction as he’s betrayed is downright terrifying.

The film works as an ensemble piece and proves that Crowe is just a fine character actor as he is a leading man. But one thing’s certain, his unflinching intensity dominates the screen and his performance is the one I remember most even amongst such a terrific ensemble delivering one of their best performances.

The role that put Crowe in the Hollywood map and beyond, this would perhaps remain as Crowe’s most memorable performance. I was mesmerized by his staggering screen presence the second he showed up on screen in the bloody battle in Germania, right up until the end at the Colosseum. I simply couldn’t take my eyes off him. He’s the ultimate tough guy with a heart, as his scene mourning the slain wife and son is as riveting as his gladiatorial fights. The film is chock full of memorable scenes, but none as unforgettable as the moment where he first uttered his full name that made his enemy shudder. Maximus Decimus Meridius is one of the greatest screen names ever, and Crowe made that character into an icon.

Apparently Crowe was so unhappy with the script for the film that he often rewrote the lines to suit his style. Per IMDb trivia, he initially refused to say the lines “In this life or the next, I will have my vengeance,” telling one of the screenwriters William Nicholson: “Your lines are garbage but I’m the greatest actor in the world and I can make even garbage sound good”. Cocky perhaps, but you know what, he made every line worked even if they sounded corny on paper, as he brought so much gravitas to the role. So many of the quotable lines from the movie became so iconic largely because of the way he delivered them and his timing was always spot on. 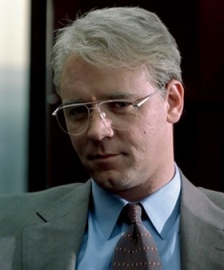 This is the role that Crowe should’ve won his first Oscar for. As great as his performance as Maximus—which was decidedly more sensational—his quiet but incredibly astute portrayal of a tobacco whistle blower still stands as his greatest role to date for me. Not only was this a transformative role for the actor, having to gain 35+ pounds to play Jeffrey Wigan, he also embodied the role with his meticulous performance. It’s a prime example where the actor disappears as what you see on screen is this character, at times I felt as if I was watching a documentary. The humanity of the role is incredibly moving, as Wigand is really just a regular guy—a dotting father and loving husband—driven to the boiling point, trying his best to cope with the incredible pressure of his situation. The Insider is also one of Michael Mann’s finest directing moment, and perhaps one of Al Pacino’s best roles as well as CBS’ 60 Minutes producer Lowell Bergman.

This role is a must for any Russell Crowe fan, or anyone who ever doubts his acting prowess. The first of many thinking-man’s thrillers where Crowe’s immense talent is put to good use.

I look forward to more great roles from Crowe, be that as a leading man or supporting roles, such as the one as Superman’s father Jor-El in Man of Steel.

Well, those are my picks of top 10 Russell Crowe’s roles. What about you? Please list your own favorite roles in the comments.