Hello all! It’s been quite a hectic weekend for me – one company holiday party and a farewell dinner for a friend who’s moving out of town. But I was able to fit in a trip to the cinema to catch Life of Pi before its last theatrical run. We were expecting an empty theater at 10:30 in the morning but the theater was actually about half full. So the Oscar nominations surely has an impact on those films being nominated. Speaking of award season, apparently the Golden Globes was on tonight (check out Sati’s entertaining musings on the telecast). I found out about it as I was on Twitter, but really I had no desire to watch it for some reason. Just wasn’t quite ready for the award season yet, despite my Oscar reaction post this past week.

Truth be told, I’m feeling a bit under the weather, so I haven’t quite finished my review of Zero Dark Thirty yet, but I’ll say this though, the film certainly deserved the Oscar nomination for Best Picture and I’m even more convinced that Kathryn Bigelow is robbed big time out of the directing nod.

Anyway, here’s my quick review of… 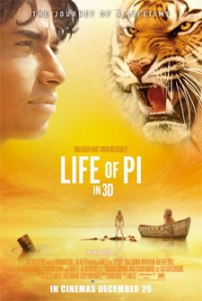 My friend Sarah M. has given me her review a few months ago and she absolutely loved the film. She also loved the book but I actually never read the famous novel by Yann Martel. It tells a fascinating story of an Indian boy named Piscine Molitor “Pi” Patel (Suraj Sharma) who survives 227 days being stranded on a boat in the Pacific Ocean with a Bengal tiger named Richard Parker. The film was told in flashback by the older Pi (Irrfan Khan). How the boy and the tiger got their names are quite amusing, but more than mere amusement, the story attempts to explore the journey of spirituality and faith. Pi was an earnest seeker, searching for life’s meaning and grasping with the concept of ‘God’ by embracing various beliefs, Hinduism, Christianity and Islam, all at once.

“If you believe in everything, you will end up not believing in anything at all,” Pi’s father told him. A profound word of wisdom indeed, though in the end neither the protagonist nor the film itself follow such an advice. Instead, it would rather subscribe to the [much more popular] notion that ‘all roads lead to Heaven.’ I find the spirituality aspect very intriguing… it’s a story that ‘will make you believe in God,’ said the protagonist as he began to tell his life story. It’s a rather abstract concept of God however, as the film does not make a stance for or against one way or the other. It’s simply presenting the protagonist’s interpretation of who God is.

As a fantastical film, it’s beautifully-made by Ang Lee, who’s known for his knack for genre-jumping. Just look at his filmography and you’ll find he’s quite bold in his film choices. So it’s only natural that he picked a fantasy adventure and pick what people deemed an ‘unfilmmable’ novel. Right from the opening sequence, it’s clear we’d be treated to a visual feast. Nice to see that the 3D was worth it, it enhances the experience without being overwhelming. The colors are so vivid, I find the night scenes even more beautiful. 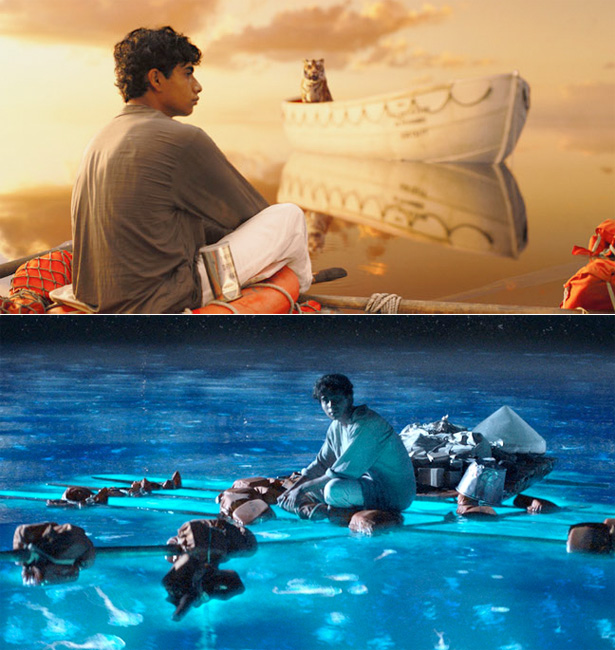 Performance-wise I’m quite impressed by both actors playing Pi, as they both give an emotionally-engaging performance. The young Pi was played by Suraj Sharma in his big-screen debut, whilst the older Pi was played by a popular Bollywood actor Irrfan Khan. He’s not always very expressive, but for the most part, Sharma was able to make us sympathize with his character, which is quite a feat as most of the time he’s the only one on the screen with barely any dialog. The real star is perhaps Richard Parker, the beautiful Bengal tiger which shares most of the screen along with Pi. I was quite mesmerized by its beauty, it was quite a technical feat to combine the use of CGI and real-life tiger (you can watch the featurettes here). Despite never actually sharing a scene together on set, I thought the CGI of the tiger interacting with Pi was pretty realistic. That storm scene was also pretty incredible to watch.

In summary, I do appreciate the hopeful and optimistic message, but at the same time it’s not really as spiritually-enlightening as it is beautiful to look at. It may not change your views about spiritual faith, but it might restore or affirm your faith in the magic of cinema. This is a film that’s best viewed on the big screen and I’m certainly glad I did see this in its 3D glory.

42 thoughts on “Weekend Roundup: Quick Thoughts on Life of Pi”