Happy Monday, everybody! Well, as I mentioned on my monthly roundup, I’ll be off for a two-week vacation to my hometown Jakarta and then Hawaii on our way back to Minnesota. So in less than two weeks, I’ll be arriving in Hawaii, Kauai to be specific. This will be my second time in Hawaii as I went to Honolulu when I was about 13 with my family, but my first time on Kauai island.

It’s no surprise that America’s tropical paradise has been a popular spot for the movies and TV shows. I grew up watching Tom Selleck in his indecently short shorts in Magnum P.I. and I think my brothers like watching the original Hawaii Five-O. I quite like the current remake on CBS as well though I haven’t been watching it much lately (I’m horrible with keeping up w/ TV shows!) 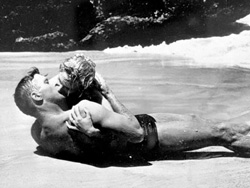 As far as movies go, there seems to be a ton of films set in Hawaii. The busy Hawaii Film Office calls the islands ‘Hollywood’s Tropical Backlot.’ Perhaps the generous production tax credit makes it a welcoming place for filming, on top of the welcoming climate and spectacular locations of course. From classics like From Here to Eternity, Blue Hawaii, and Tora! Tora! Tora! to contemporary ones like Forgetting Sarah Marshall, Punch Drunk Love, Pearl Harbor and Oscar-nominated The Descendants, there have been some popular films set on the islands. Even some of the non-CGI scenes of Avatar were shot in Hawaii. As this site pointed out, the two leads of the movie actually filmed some scenes on location in order to “… give them all a taste of how the scenes would feel if they were being shot in a real rain forest.”

Just on Kauai alone, there are a dozen movies set on the fourth largest island on the archipelago (per gohawaii.com). Of course the most notable one being Jurassic Park (though the theme park was filmed in the family-owned Kualoa Ranch in Oahu island). I can’t wait to take the helicopter ride to Manawaiopuna Falls, or the Jurassic Park Falls as it’s become known for. The breathtaking 360-foot high falls is in my list of memorable waterfalls in the movies I made almost exactly a year ago. I need to rewatch that movie one of these days, it’s one of my fave movies of the 90s and surely on my top 10 from Spielberg.

My top three movies set in Hawaii (of the ones I have seen so far) would include Raiders of the Lost Ark, Jurassic Park, and The Descendants. Michael Bay’s Pearl Harbor would make my worst, ahah.

So now your turn. What are your top three movies set in Hawaii?

61 thoughts on “Aloha! Hawaii on my mind… what’s your fave movie(s) set in America’s tropical paradise?”