Today I truly appreciate the simple things in life. Well not that I wouldn’t any other day but especially so the past couple of days after reading all the news and weather updates on the Frankenstorm that is Hurricane Sandy. The fact that I can drive peacefully on the road without being pounded by crazy winds and heavy rain, and the fact that I have electricity in the house and place of work. The Empire State Building was trending last night on Twitter and it turned out it was because of this instagram of the Empire State Building’s light that shone when NYC went completely dark. What an eerie but yet striking image.

My thoughts and prayers goes out to everyone in the path of the storm… please do stay safe!

This weekend I actually opt for home cinema as I’ve seen both Cloud Atlas and Chasing Mavericks early last week. We had bought the Indiana Jones Blu-ray set a couple of weeks ago but couldn’t watch ’em right away as I had to cover for TCFF. 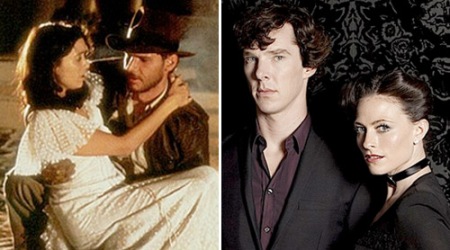 We rewatched Raiders of the Lost Ark and it was still as entertaining as ever. The picture quality is just brilliant, and Harrison Ford is perfectly cast as the rugged explorer, I really can’t picture anyone else in this role so whoever’s gonna replace him in the reboot would have HUGE shoes to fill. I also love Karen Allen as Marion, her spunk and demeanor reminds me so much of Margot Kidder as Lois Lane!

We finally caught up with BBC’s Sherlock Season 2, starting with Scandal in Belgravia. It’s by far the most confusing episode for me, the plot is just so darn complicated for my little brain. But still it’s entertaining to watch Benedict Cumberbatch and Martin Freeman as the odd couple and there are some really hilarious moments, especially when they first encounter Lara Pulver as Irene Adler. I thought she was brilliant in the role — Sherlock’s definitely met his match in her and watching the two psychopaths flirt with each other is quite amusing. 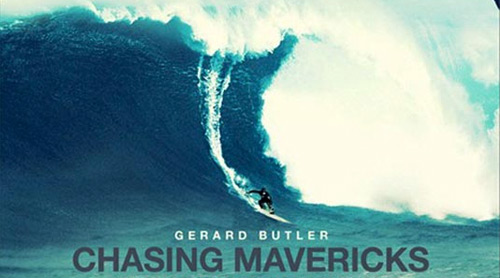 I’m NOT a surfer, I’ve never even been ON a surfboard, not on land, let alone on water. But something about the surfers’ lifestyle fascinates me so I don’t think you need to know anything about surfing to enjoy this film.

The film tells the true story of Jay Moriarity, a young Santa Cruz surfer who’s immortalized in the Live Like Jay movement that just celebrated the 10th anniversary of his death last June. It was a short life as he drowned when he went diving in the Maldives just a day shy of his 23rd birthday, but the movie showed just how he lived.

Jay (Jonny Weston) first met Frosty Hesson (Gerry Butler) when Frosty rescued him from the ocean when he was only 8 years old. That experience didn’t put him off surfing, in fact, the opposite is true. He found it to be his true calling, not unlike someone like Felix Baumgartner who has a penchant for heights. Jay just loved the water and that 40-foot waves seems to be calling his name each time it hit the shores.

The fact that he lives with a single mom and an absentee father, he also yearns for a father figure and he finds that in Frosty, even though he himself is a loner who doesn’t seem to have it all together despite having a saintly wife (Abigail Spencer) and two kids. Predictably, the two bonded as Frosty trains Jay to be able to achieve his dream to chase ‘Mavericks,’ which refers to the surfing location north of Half Moon Bay in California where after a strong winter storm could top out at over 80 feet! I appreciate that this is truly a movie about surfing, not about some girl in a bikini or a procedural action flick. It focuses on the sport and shows the dedication it takes to be a darn good surfer in a sport where even the smallest miscalculation could cost one his/her life. Butler himself surely knew that by heart as he experienced a near-death accident when he was knocked off his board by a freak wave during filming. Talk about suffering for your art!

Jay certainly has a story worth telling, though I wish the story could’ve been as groundbreaking as the subject matter. Seems like when the movie is not so much focused on surfing, the script sort of loses its footing, so there’s barely any depth to any of the relationships portrayed in the film aside from Jay and Frosty’s. Even the romance between Jay and his eventual wife Kim (Leven Rambin) is so darn cheesy it comes off like an after school special.

The formulaic script really doesn’t give the actors any favors. It’s really too bad as I think Butler shows what he’s capable of all along. It’s an understated role that shows his vulnerable side, so it’s not the typical alpha-male action hero he’s known for. He not only look the part with his svelte physique and surfer hair, but he’s also got that convincing surfer swagger. As for Weston, I had been skeptical about his casting initially but I thought he captured the jovial spirit of what I picture Jay would be. The female characters are under-developed however, with Elisabeth Shue as Jay’s mother suffers the worst fate of being completely wasted here. There’s also an attempt to add a ‘villainy’ character in the film that goes absolutely nowhere.

What I do love about it is the spectacular cinematography that captures the glory of surfing. Those giant waves are amazing, and I’m glad I saw this on the big screen! I love that it was filmed on location which adds a high level of authenticity to the film. One of the main draw of this movie for me is the fact that L.A. Confidential’s director Curtis Hanson’s at the helm (reportedly Hanson had to bow out of filming because of health reasons and Michael Apted took over, so they share directing credit). I do think given the filmmakers’ credentials, this could’ve been a lot more compelling, but it’s not a bad movie by any means. In fact, I’m glad to hear according to Santa Cruz Patch, this film was well-received by the community where Jay used to surf.

I think a lot of the lessons that Jay learns in this movie, about the ‘Four Pillars of the Human Foundation’ and other disciplines can be applied to other parts of lives. The rousing ending is quite a spectacle, with those giant, mystical waves taking center stage and I could see how surfing is as much a mental sport as it is a demanding physical one.

…
P.S. I’m quite bummed that his movie was a total bomb. I didn’t expect it to be in the top five, but I certainly didn’t think it’d do so badly with a paltry $2.2 mil. Vulture asked Why Does Hollywood Think America Likes Surfing? and seems like the sub-genre of surfing movies are inherently not very marketable. Ah well, I’m glad I saw it and I’m glad they brought Jay’s story to life in this one.

Well, that’s it for the roundup this week. How ’bout you, seen anything good?