It’s been a ton of fun watching more than 1 movie a day on the big screen. Thanks to TCFF, October is surely going to be my best movie-going month this year! Before I go to the reviews, I just want to say the film fest is going really well, nice to see the ShowPlace ICON Theatres abuzz with people coming and going all day long. Just want to give a shout out to Ingrid Moss, TCFF’s social media director for continuing to get the buzz out, and Lee Jordan and Don Stoltz who did a great job coordinating all the volunteers, and Lee actually doubles as a merchandise sales guy. You go guys!!

TCFF has a big red carpet area right next to the ticketing booth, and my blog friends and I couldn’t help posing in front of it 🙂

Ok, on to the reviews:

I knew I wanted to see this movie as soon as I saw Julia Stiles‘ name in the cast, and the premise sounds like a good recipe for an oddball comedy. Set in a suburban house in California, the story centers on four couples who meet periodically for Sunday brunch. It seems like a ‘normal’ group thing, that is until they soon discover that the world may be about to end and they’re stuck in a house together.

You could call this a relationship comedy as we meet a bunch of quirky (read: crazy) characters all gather in one room together trying to attempt a civil brunch together. Stiles plays a doctor who’s bringing history teacher Glen (David Cross) on their third date to meet her friends.  The hosts are married couple Emma (Erinn Hayes) + Pete (Blaise Miller), and the guests are free-spirited married couple Lexi (Rachel Boston) + Buck (Nic Cage-lookalike Kevin M. Brennan), and the long-engaged Hedy (America Ferrera) + the alien conspiracy-obsessed Shane (Jeff Grace).

I think the less you know about the plot the better, as the joy is in discovering just what in the world is going on with each character. Most of the couples know each other for some time—Glen is the only ‘outsider’ if you will— but all of them create a bizarre dynamics that makes you wonder just how could they survive a brunch like this without killing each other in the end!

Todd Berger assembled a pretty good cast and arm them with sharp dialog filled with off-the-wall dry humor. He also has a cameo as the neighbor in the biohazard suit and his appearance is one of the funniest parts of the movie. The comedy isn’t slapstick or forced, I mean the situation themselves just lend to thigh-slapping laughter. These couples are so absorbed in their own universe that they’re so blatantly oblivious of what’s happening all around them, and even when they do find out, the way each of them cope with it is just hilarious. I think the sharp script and the dead-pan delivery is key here, and despite it being set in just one house the entire time, it doesn’t feel at all boring. The feeling of claustrophobia and isolation is intentional however, and it just adds to the whole zaniness of the whole thing.

Beneath all that craziness though, there are some moments of poignancy, even something a bit profound, that life is short and one really can’t take things for granted. It definitely makes you think that when doomsday looms, just what would you do with your last few hours of your life, and what’d happen to the relationship between you and whoever you happen to be stuck with in that given moment.

It’s a Disaster is playing again at TCFF this Wednesday Oct 17 at 9:15pm
Get your tickets now »

Bro was okay as far as movies go, but for it being the director Nick Parada’s first major film, it was pretty solid. For me, the cinematography was the shining attribute, then came the story.

The narrative falls almost into a Trainspotting formula, where people get involved with the wrong crowd, get in over their head, hit rock bottom, but ultimately they are able to regroup and learn valuable life lessons from their own mistakes. Instead of it being centered around English youth, it takes place in the Motocross subculture, where Cocaine, sex, and alcohol are the drugs of choice.

This is similar to movies like the ones in the Step Up series, where the acting and story aren’t as valued as the the athletic performances. Danny Trejo does have a minor role, but Beau Manley, a professional motocross racer, was the most interesting as far as actors go. The movie comes out for home viewing in December, and I was told that the deleted scenes and interviews that are included on the disc are worth a watch. 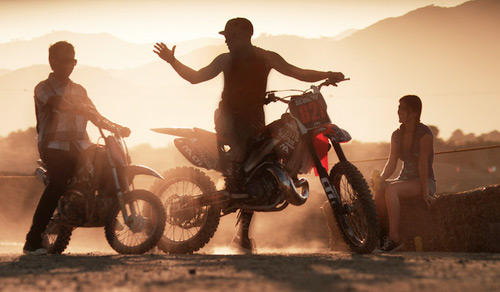 Maybe too many expletives were used, and the rhythm that the lines were delivered felt, well, like lines being delivered. Some of the scenes felt extraneous but all in all, this felt like a first attempt at directing and acting – but not unsuccessful by any means.

What are your thoughts on either one of these films?