This is Part II of Encore’s World of Film & TV that was spearheaded by Andrew. I have posted GAME 13 two days ago. The goal of this tournament is to determine the single performance, chosen by you fine lovers of cinema, that is worthy to be the BEST of the decade. Andrew asked me to do a write up to a couple of the showdowns [you can see the entire bracket here].

Please take part in this well, essential blog event by casting your VOTE and make your voice heard!

Without further ado, here’s my writeup for Game 17: 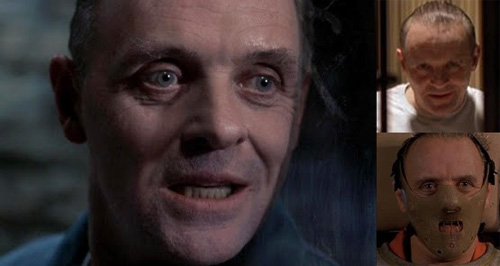 I happened to see Silence of the Lambs in the cinema and I tell you, for a while I was so terrified of Anthony Hopkins and even the mere mention of ‘chianti’ and ‘liver’ makes me shudder. It’s no wonder his personification of Dr. Hannibal Lecter, the charismatic cannibal who never blinks when he speak, was ranked #1 on the American Film Institute’s Villains in its compilation of the 100 Years of The Greatest Screen Heroes and Villains.

Much of the iconic mannerisms: the nasty slurping sound and the creepy way he speaks Clarice’s name to taunt the young FBI officer are all improvised by the seasoned actor. Yet it takes a special skill not to overdo the creepy-ness, it takes skill to avoid becoming caricature. Such a character could easily have the opposite effect of being comical instead of sinister but Hopkins avoid the potential dilemma. He manages to forge that delicate balance of portraying a charismatic figure that effortlessly pulls you in, whilst at the same time scares the living heck out of you.
…

…
Michelle Pfeffier in The Age of Innocence (1993) as Ellen Olenska 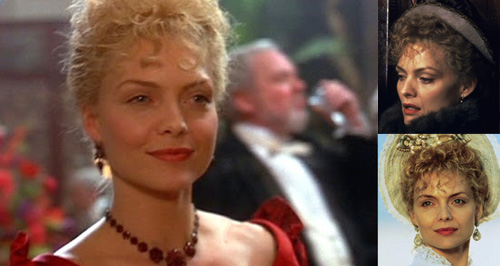 I believe Scorsese’s period drama showcases Pfeiffer’s best work and in a way proves that she is a serious actress who somehow, unfortunately, is not regarded as such by her peers. So perhaps that’s why the beautiful actress identify so well with Ellen Olenska, an outcast in a 19th century New York high society when she is separated from her husband. Raised by a single mother in a society where divorce was still a taboo, I immediately identify with her predicament.

This is my favorite Scorsese film and though it’s not violent in the physical term, it’s definitely a vicious one in terms of matters of the heart. The conversations between Newland Archer (the sublime Daniel Day-Lewis) and Olenska are heart-wrenching, their yearning and frustration that they cannot be with each other just makes my heart bleed. Yet Olenska is not just some lovesick puppy. She is a strong woman who defies society and refuses to conceal her independence, even at the risk of being scorned by people around her. That defiance spirit is magnetic and I credit Pfeiffer’s astute performance in getting that across without being overbearing. A magnum opus from a celebrated director, and I’m glad to say the film’s stunning cinematography and costume design match the equally beautiful performances. It’s rare to see a flawed heroine depicted in such a bewitching way, but Countess Olenska is surely one of them.

Which of these is the finer performance of the 90s?

Please cast your VOTE on Andrew’s blog and/or let me know your pick and why in the comments.