Hello folks! I haven’t done a trailer post since Man of Steel last weekend and this past week there have been quite a few trailers that caught my attention, so I thought I’d highlight ’em here in case some of you have not seen it.

I’ve been quite curious about this movie for some time ever since it was reported over a year ago. I even did a spotlight post for it and boy just check out the star-studded cast! Well, this past week we got an extended trailer (5-min long!) and by golly it looks spectacular! I thought that the Tom Hanks + Halle Berry combo is rather odd, but the whole trailer is so surreal anyway. Despite the length of the trailer though, the story is as cryptic as ever. Truthfully I had no idea what it’s about but reading this description of the plot might give you somewhat of a clue:

An exploration of how the actions of individual lives impact one another in the past, present and future, as one soul is shaped from a killer into a hero, and an act of kindness ripples across centuries to inspire a revolution.

The story is based on British author David Mitchell’s award-winning sci-fi novel of the same name, it was published in 2004. On top of the amazing cast from all over the world, I’m curious about it because it’s from the Wachowski siblings. It certainly is an ambitious project, let’s see if the Wachowski could pull this off. Would this be as groundbreaking as The Matrix over a decade ago?
…

I’ve been waiting for Joaquin Phoenix to come back to acting from his supposed *retirement.* So the moment I saw this trailer I REALLY want to see this.

A 1950s-set drama centered on the relationship between a charismatic intellectual known as “the Master” whose faith-based organization begins to catch on in America, and a young drifter who becomes his right-hand man.

From the trailer, the faith-based organization is curiously similar to Scientology and this Daily Beast article written by someone who was a Scientologist for 15 years seems to confirm that The Master character could very well be based on L. Ron Hubbard.

Of course director Paul Thomas Anderson nor anyone from the studio is confirming that. No matter, this looks like an intriguing film indeed and both Philip Seymour Hoffman and Phoenix’s performances seems poised for major buzz comes award season.

I’ve mentioned this film on the Gerry Butler Special post, and here’s the official description: 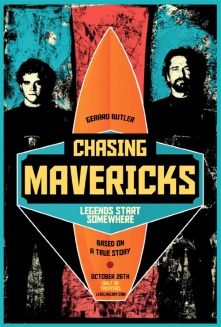 CHASING MAVERICKS is the inspirational true story of real life surfing phenom Jay Moriarity (newcomer Jonny Weston). When 15 year old Jay discovers that the mythic Mavericks surf break, one of the biggest waves on Earth, is not only real, but exists just miles from his Santa Cruz home, he enlists the help of local legend Frosty Hesson (Butler) to train him to survive it. As Jay and Frosty embark on their quest to accomplish the impossible, they form a unique friendship that transforms both their lives, and their quest to tame Mavericks becomes about far more than surfing.

Truth be told, I’m not too fond of this trailer. Jay’s story seems compelling but I’m not seeing it in the trailer, it looks bland and formulaic, though those waves do look spectacular. But hey, hopefully a meh trailer means a good movie, after all the Curtis Hanson did direct one of my favorite crime thrillers L.A. Confidential.

I do love the fact that Butler actually learned to surf for the first time for this movie, instead of just using a stand in. Those surf shots look real and Butler looks pretty convincing as a surfer mentor, so I remain optimistic about this one. Now that I think about it, this’ll be the first surfing movie since I watch like Point Break! Btw, I like the first poster that still has the old title, but this latest one is very artistic and has that ‘surfer dude’ personality.
…

Behold the power of iconic music. Someone made this Man of Steel teaser and set it to John Williams’ Superman score:

It’s got the EXACT same footage but it immediately feels sooooo much more powerful and gives you that holy goosebumps watching it. I know I should give Hans Zimmer the benefit of the doubt that he’d create something special for this film but man, you can’t deny just how amazing Williams’ score is and clearly it’s such a timeless piece of work!
…

Well, thoughts on any of these films folks? Which one are you anticipating most?