In about three months time, one of the most exciting event in my neck of the woods is touching down. YES, the Twin Cities Film Fest starts on FRIDAY, October 12 through Saturday, Oct. 20!

I’ve always loved a movie about writers. And the premise of Ruby Sparks no doubt intrigues me:

A novelist struggling with writer’s block finds romance in a most unusual way: by creating a female character he thinks will love him, then willing her into existence.

Now, what writer hasn’t dreamed of having this happens to them? Especially when one of your characters has all the criteria of the man/woman of your dreams 😉 But as Calvin Weir-Fields finds out, it’s a lot trickier than you think. At first glance, this movie shares some similarities with Stranger than Fiction, but with a few twists on its own. Whilst the Will Ferrell movie focuses on the character who finds himself the subject of narration only he can hear, this one focuses more on the writer.

Paul Dano stars as Calvin, a young writer who’s under pressure to relive his shining moment of having a New York Times best seller before he turns 20, but now suffers from a massive writer’s block. The way he portrays that agony is spot on and I immediately empathize with his character. One day Calvin sort of got his mojo back after having a vivid dream about a girl. Ruby Sparks is the name of that ‘dream’ girl, the protagonist of Calvin’s narration – a vivacious, bubbly red head, played with an infectious zest for life by Zoe Kazan. Then suddenly, out of nowhere, there she is! A living, breathing person who looks and sounds just like how he’s imagined her. 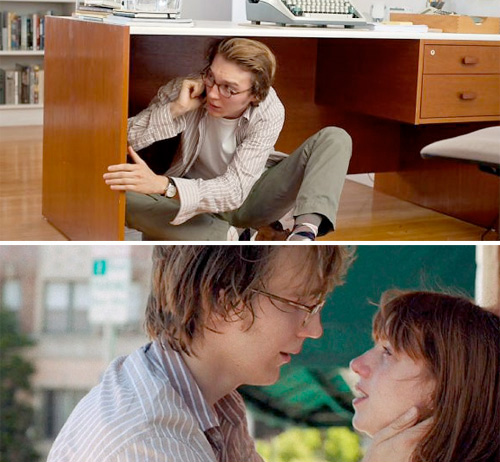 The moment Ruby enters Calvin’s life, hilarity ensues. Calvin is downright flabbergasted but Ruby is baffled by his reaction and acts as if she has always been living in his house the whole time. It’s a hilarious and endearing, funny and touching at the same time. Both Dano and Kazan played their part convincingly.

Some of the funniest moments also comes from Calvin’s married brother, Harry (Chris Messina), a stereotypical guy’s guy who thinks Calvin ought to get out more. He’s the only one who’s read Calvin’s unpublished draft about Ruby, so the moment they all meet over dinner is a hoot! They find out that Calvin can make Ruby do ANYTHING he wants, just as soon as he types it into the story. She can speak French, be a gourmet chef, etc. and of course the first thing Harry thinks of is all the um, physical alterations Calvin can do on Ruby, and basically whatever a man would want their dream girl to be and do for them.

Whilst it has plenty of amusing moments, things aren’t always so rosy. In fact, there’s a lot of dark moments here that merits its R rating. In many ways, the tone and themes are similar to Jonathan Dayton and Valerie Faris’ 2006 debut, Little Miss Sunshine where thigh-slapping humor are seamlessly mixed with intense pathos and emotional anguish. In fact, there is a fight scene towards the end of the film that is so raw, intense and utterly gut-wrenching.

The acting is top notch here. The two young cast, Dano and Kazan, definitely carry the film with aplomb. They have amazing chemistry together, Ruby’s spunky-ness perfectly balances Calvin’s awkward, somewhat socially-inept self. The supporting cast add richness to the story: Annette Bening plays Calvin’s sympathetic, free-spirited mom, Antonio Banderas as her warm, carpenter boyfriend and Elliot Gould as his therapist. Steve Coogan and True Blood‘s Deborah Ann-Woll had bit parts but are memorable despite their brief screen time.

My only issue with the film is the predictable and rather saccharine-sweet ending. I feel like if it had ended just a few minutes before the final scene, it would’ve been perfect for me. I kind of like a little bit of uncertainty at the end, where things are not always neatly tied with a big, red bow. Still, Ruby Sparks is a well-written, engaging love story.

Final Thoughts: I highly recommend this one, you’ll laugh, you’ll cry and definitely enjoy the performances. As Dayton and Farris used to be music video directors, the use of music is also compelling here, I’m sure the soundtrack is equally charming. Props for Zoe Kazan for writing an offbeat love story that feels refreshingly authentic, which is rare to see. It reminds me a bit of (500) Days of Summer, but to me, Zoe Kazan is far more endearing than Zooey Deschanel.

Summary of the TCFF Q&A with the filmmakers and leading cast:

I saw this last Monday July 16, and what a pleasant surprise to see both filmmakers and the two leading cast, Zoe and Paul were in town to promote the movie! I knew TCFF had announced there’ll be a Q&A afterwards but I didn’t think the cast would be there. TCFF executive director Jatin Setia moderated the event.

One question from the audience was about the believable chemistry between the two leading cast. Well, straight from Paul himself, apparently he and Zoe are dating. Zoe is just as bubbly in person as she is in the film, which is cute to see. I realized shortly afterwards that she is the grand-daughter of Elia Kazan! Obviously she shared his talent and I do think she has a bright future in Hollywood.

Paul seems more introverted and shy, and this is the second time he collaborates with the husband-and-wife directing duo as he previously starred as the reclusive, Nietzsche-obsessed teen in Little Miss Sunshine.

I asked Paul how he portrayed the novelist persona so convincingly, especially in conveying the writer’s block with such agony. I told him that though I knew he was an amazing actor, I wonder if he did any extensive research on that, y’know, like following a real novelist for a week or something like that.

Well, apparently he didn’t. Paul explained in his modest manner that he as an actor, he could easily empathize with a writer’s plight as he put it, ‘we’re artists who live and die by their work.’ He said that it can be extremely agonizing for an artist to be required to produce something creative, whether it’s a narration or performance, in a given allotted time in order to meet deadline. I thought that was a cool answer!

One insight I got from the filmmakers on the music was the fact that their experience as music video directors comes in handy in that they’ve become quite efficient in their film productions. They also understand the importance of music in film, so even on a paltry budget of $8 million, they had a 60-piece orchestra for the soundtrack!

Paul Dano complimented the filmmakers in that on top of being musically and visually gifted directors, Dayton and Farris also have a keen talent for story and character, which definitely shows in Ruby Sparks!

What’s next for Paul Dano and Zoe Kazan?

Paul’s been steadily turning up great work in a relatively short career. He’s worked with renowned directors like Paul Thomas Anderson (There Will Be Blood) and Spike Jonze (Where the Wild Things Are). At the Q&A he said that from Minneapolis he’d be off to Louisiana to film Twelve Years A Slave with Michael Fassbender, Brad Pitt and Benedict Cumberbatch (wow!) for British director ‘du jour’ Steve McQueen. He’ll also be seen in Looper with equally gifted young actor Joseph Gordon-Levitt.

This is the first time I saw Zoe Kazan on film, but she’s got almost two dozen TV/movie work under her belt. She’ll be starring with Harry Potter star Daniel Radcliffe in an upcoming romantic comedy The F-Word.

Thanks to TCFF and Allied Integrated Marketing for bringing such a special screening to Minneapolis!

Thoughts on the movie and/or the talents involved? Let’s hear it in the comments.

26 thoughts on “Counting down to TCFF: ‘Ruby Sparks’ Review and Q&A”