The Hollywood icon would’ve turned 96 years old today. Though he has passed away for almost a decade, I do think his legacy lives on. I feel like I’ve been preparing to pay tribute to Mr. Peck for over a month now, but suddenly when the time comes, I find it ever so daunting a task as I feel like there’s so much to say I don’t know where to start!

Most of you who’ve read my Spellbound post knew I fell head over heels for him in that Hitchcock film. It really was like ‘lightning striking‘ when I first beheld the 6’3″ lanky then-29-year-old man with magnificent cheekbones, melancholy eyes, and THAT deep, rich voice that can be as commanding as it is soothing. Anna @ Defiant Success said in her email to me that the “Gregory Peck bug” didn’t bite you. It pretty much ate you alive. Ahahaha, well I can’t refute that. I mean how else would you explain the plethora of Gregory DVDs all over my basement, ordering multiple sheets of Atticus’ Forever Stamps, AND devote a Tumblr all to just to this one man? 😀

But really, can you blame me?

Few actors possess the kind of charisma, looks and talent that Gregory had. But what makes me respect him more is that he never capitalized on his looks, far from it. After reading his biography by Gary Fishgall, which is such a fascinating read that I kept going back to it repeatedly, I’m struck by such a humble beginning he had, especially his years as a struggling theater actor trying to make it on Broadway. Theater work was really his first love, so much so that when Hollywood beckoned, he wasn’t easily swayed. He even made MGM’s famed producer Louis B. Mayer cry when Peck refused to sign his offer of seven-year contract  — promising the then unknown to be the next Clark Gable — as he wanted to fit in more theater work in between films. He was the first actor of that era who refused to be ‘bought’ by the studio. Clearly he didn’t need such a contract to succeed!

I have even more respect for his intelligence and exemplary work ethic. His preparation for every role was a labor of love, beginning with committing every line to memory, he then ‘assembled the character to the best of [his] ability.’ That dedication shows in every single film he did, and he continually challenged himself with every role in various genres, from drama, thriller to westerns. After reading every available articles on Peck known to man, as well as that biography, it’s clear that he’s a hero on and off screen. All the honors (both acting and humanitarian) and legacy he’s achieved, including the Presidential Medal of Freedom from President Lyndon Johnson. Truly, a beautiful man inside and out.

Just yesterday I read that President Obama will introduce a screening of To Kill a Mockingbird, both at the White House Family Theater and also on the USA network airing on April 7 as part of the 50th Anniversary celebration of that iconic film (per THR). I do think that Atticus Finch — voted by AFI as the greatest hero in American film — is a rare occasion where the actor and the role meets. Just as effortlessly he had fought against anti-semitism in Gentleman’s Agreement, Peck championed for racial equality with such integrity and grace.

“…[Peck] embodied the best in all of us… He gave idealism a good name, made it seem possible in the flawed state of this human condition,” stated this msnbc article titled Gregory Peck, the last noble breed. On the year he died, TIME magazine ran this article citing “…Peck was the sonorous pitchman for movie humanism. He showed how a strong man could also be a gentle man.”

No doubt he earned the respect of not just critics, moviegoers, but also his peers. Liza Minnelli called him “the ultimate movie star.” His co-star in Designing Woman, Lauren Bacall, said it best I think:

“His values and his standards are very high, which is why Bogie respected him so much. You don’t meet many people, much less actors, who have that kind of character.”  (per Films42 tribute post) 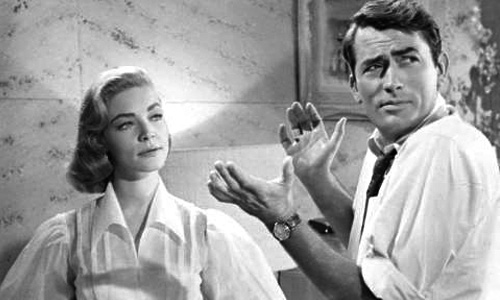 His Forever Stamp inauguration was attended by the likes of Sidney Poitier, James Darrin, Morgan Freeman, and hosted by Sharon Stone. It’s Freeman’s story of meeting Peck that made me grin ear to ear, “… he told of sitting in the very same Academy theater, seeing Peck walk up the aisle and jumping from his seat to stop him dead in his tracks as Freeman dropped to knees in front of him and mumbled something about the honor of being in presence of Captain Ahab.” Oh my, would I love to be a fly on the wall at that moment!

What few people know though, that this regal and elegant man has a dry wit and great sense of humor. “He can be funny,” said Peck’s Paradine Case costar Louis Jourdan, “which is fortunate. Otherwise, such perfection would be unbearable.” (per Peck’s Kennedy-Center bio) If you’ve seen Designing Woman, you too would wish he had done more comedic roles. The scene where his ex-girlfriend dumped a plate of ravioli on his lap, his deadpan expression made the scene even more hilarious, especially as he calmly asked the waiter for a pair of pants! “George Burns used to call it the funniest take he ever saw on the screen,” Peck told the msnbc writer.

Need proof? Check out this clip of Peck appearing on the Jack Benny show with the host himself and George Burns!

…
For his birthday festivities, I invited a few of my friends to participate by sharing their posts on Mr. Peck, be it a tribute or reviews of his films. As you can see below, this ever so versatile acting legend covered pretty much any genre and he’s always convincing in every one of them. That’s why I picked him as one of the Then Best Actor of All Time in this relay race blog-a-thon.

So to those of you who have NOT seen any Gregory Peck movies, you no longer have any excuses not to watch at least one or two. We’ve got all kinds of suggestions out the wazoo here! 😀

Note: The one with the * (asterisk) is a FlixChatter post

…
I think I will forever be a Gregory Peck fan. You know that old saying ‘they don’t make ’em like him anymore‘? Well in the case of this one Hollywood icon, it’s not a cliché at all.
…

Please join me in celebrating this wonderful man by reading one of the posts listed above. What are your thoughts of Mr. Peck and his work? I’d love to hear ’em in the comments! …