Hello all… it’s a cinema-free weekend roundup again I’m afraid. But I was really bummed out that Tinker Tailor Soldier Spy, The Artist and Coriolanus, THREE of my most-anticipated movies I had hoped would arrive by now are NOWHERE to be found within a 50-mile radius. It’s a shame really, I mean, you’d think that given the excellent reviews the studios would at the very least consider ONE theater in Minneapolis area to carry their movie!! Seriously, sometimes I feel like Hollywood don’t think people in the Upper Midwest don’t watch movies! FYI, we don’t live in igloos, y’know…

Ok, end rant… just need to get that off my system…

Now, thank God for home cinema, as I managed to quite a few stuff this weekend.

As I mentioned in my Five for the Fifth post, we got the Bourne trilogy on Black Friday. This is one of the rare trilogies in which all three movies were actually GOOD, not just decent but EXCELLENT.  It’s been ages since we saw any of the Bourne movies and I kind of forgot most of the details about the first one.

A man is picked up by a fishing boat, bullet-riddled and without memory, then races to elude assassins and recover from amnesia.

Matt Damon really is the perfect choice as Bourne, which was a pleasant surprise to me at the time as he really didn’t strike me as the ‘bad-ass assassin trained to kill with his bare hands’ kind of guy. But yet, he is totally believable as that character, yet has the sensitivity to make you care for his well-being and his ‘mission’ to break away from everything he’s been trained to do. The supporting cast is top notch: Brian Cox, Chris Cooper, Julia Stiles… and Clive Owen in a brief-but-memorable role.

Based on Robert Ludlum’s novel and directed by Doug Liman (Mr & Mrs Smith), this is the anti-Bond espionage thriller that delivers on all counts… action, suspense, intrigue, even romance. German actress Franka Potente (Run, Lola Run) is such a breath of fresh air than the typical Hollywood flawless-but-boring starlet as Bourne’s partner-in-crime turned lover. The filming locations in France, Czech Republic, Italy and Greece offer gorgeous scenery, as well as make the chase even more exciting. I also love the car chase with a vintage mini through the streets of Paris… it almost rival that one in the opening sequence of The Transporter.

My pal Vince recommended this to me just before I got on with my Gregory Peck marathon. Fortunately, it’s part of the Gregory Peck’s box set I bought just before Thanksgiving. 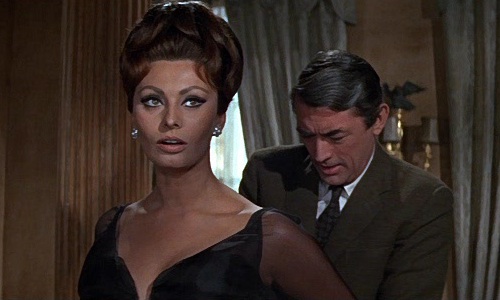 Story of international intrigue involving a university professor, an Arab prime minister, a ruthless businessman, a beautiful spy, and hieroglyphics.

Some of the reviews I read said this movie’s got a bit of Bond and a bit of Hitchcock. Even the DVD cover and the opening title design with Henry Mancini’s score is VERY Bond-esque. Now, I’ve always thought Gregory would make an awesome Bond, though given his credence, I seriously doubt he’d even consider playing such a role.

According to IMDb, the part of the bumbling professor David Pollock was originally written for Cary Grant, it’s really tailor-made for him. But you know what, I think Peck’s comic timing was pretty darn good. He had that inherently-likable quality about him and he seemed to relish in being all goofy after the serious roles he’s played. The star of the show however, is Sophia Loren. The ultra-sultry Italian actress was in her prime and was more than up for the task to play the seductive Arabic mystery woman Yasmin who knew more than she let on. The fashion by Christian Dior is almost a character itself in this movie, especially the ‘nighty’ she wears the first time she meets Pollock.

You don’t really take this kind of movie seriously, there are more plot holes than the plethora of shoes Loren wore in this movie. But it’s a good escapist fun through and through, with tons of cheeky, memorable scenes, especially the one where Pollock hides inside Yasmin’s shower and playing footsie when she drops the soap! In the Conversation with Gregory Peck documentary, Peck was asked in a Q&A if Loren was really naked in that scene. Peck was coy about it, replying… “I can’t really say, but the view was spectacular.” Ahah, we believe you, Mr. Peck!

Atticus Finch, a lawyer in the Depression-era South, defends a black man Tom Robinson against an undeserved rape charge, and his kids against prejudice. 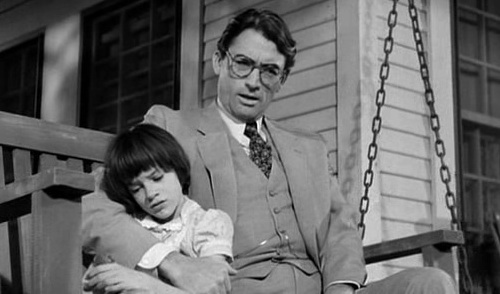 Oh my… where do I begin… there are so many things I want to say on this one. When I’m done with my Gregory Peck marathon (probably in a couple of months?), I plan on writing special appreciation posts on a select few of his films, and for sure this one will be at the top of the list.

Minutes after the film’s over, I tweeted this.. ‘Some films will linger for days, some for weeks, and some a lifetime. I think To Kill A Mockingbird will stay with me forever…’ I’m still mulling it over after seeing this about 48 hours ago. I’m amazed why it took me this long to finally see this masterpiece. My friend Dan at Top 10 Films listed this as number one in his list of Top 10 American Films about Race and Prejudice, and rightly so.

On top of the momentous racial issue, this film also offer a moving depiction of fatherly love… Atticus Finch was the hero to his daughter Scout and son Jem first before he become the town hero defending racial prejudice. His tender scenes with Scout, especially in the bedroom reading scene, is as powerful as his courtroom speech. This is a role tailor-made for Peck who exemplifies quiet strength beautifully, I really can’t imagine anyone else in this role. His Oscar win (his fifth nomination) was truly well-deserved… and of course, more than a little overdue. 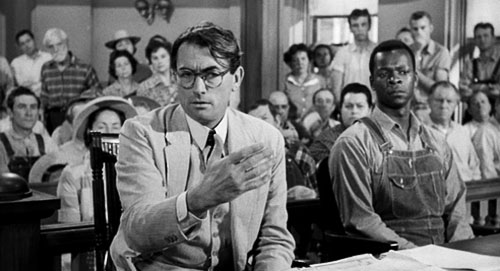 Besides Peck, the other performances are noteworthy as well. Brock Peters is excellent as Tom Robinson and his courtroom scenes are really heart-wrenching. Robert Duval in his debut performance only has a brief role here, but it’s certainly memorable. But the film truly belongs to Mr. Peck, it’s no wonder he’ll forever be known as Atticus Finch. It’s also fitting that AFI has chosen Atticus as the Number One On-Screen Hero in the last 100 Years.

Just a little trivia from IMDb:
The watch used in the film was a prop, but author Harper Lee gave Gregory Peck her father’s watch after the film was completed because he reminded her so much of him. Mary Badham (Scout) and Gregory Peck became close during filming and kept in contact for the rest of his life. He always called her Scout.
…

So what did you all see this weekend? If you’ve seen any of these films, I’d love to hear your thoughts as well.