Well, I feel like I’m the last person who saw this film. I had been so intrigued by this from the first time I heard about it. When it won Palme d’Or at Cannes, I said I couldn’t wait to see it, alas I finally got around to seeing it.

I’m not a Terrence Malick fangirl but I do respect his work and enjoyed three of his films in the past. However, all of his films seem to fit into the one-time-viewing-is-enough category — with the exception of the last half hour of The New World as I adore Christian Bale as John Rolfe — and this one is included.

The concept of a tree of life, a many-branched tree illustrating the idea that all life on earth is related, has been used in science, religion, philosophy, mythology, and other areas. (per Wikipedia) Now, Malick started the film with a verse from Job 38: 4 & 7 of God’s response to Job’s complaint:

“Where were you when I laid the earth’s foundation … when the morning stars sang together and all the sons of God shouted for joy?”

The verse seems to suggest that it’s leaning towards the Judeo-Christian worldview, but I feel that this is not so much a Christian film as a spiritual one… the gospel a la Terrence Malick if you will. It’s so deliberately vague that whatever message you want to take away from this really depends on your own worldview.

I’ve been warned of the lack of coherent narrative in this movie, but even with that in mind, nothing could prepare me into what I’m about to experience. I guess all of Malick’s movies are something of an enigma, but this is perhaps his most obscure and cryptic work to date. There is barely any dialogue in this film. I even joked to my husband that the whole script probably consist of a single page, front and back, and that’s about it.

The point of view we get is mostly from the eldest son Jack (Hunter McCracken), though there is female voice over narration that seems to suggest a mother mourning the loss of a son… at times questioning God… “Lord, Why? Where were you? Did you know what happened? Do you care?” and other times she’s letting go… “I give him to you. I give you my son.”

Triggered by a tree being planted outside his skyscraper office building, the adult Jack (Sean Penn) who’s now a successful architect begins to reminisce on his childhood memories growing up in 1950s Texas. He and his two brothers were raised by a stern father (Brad Pitt) and loving mother (Jessica Chastain). That is pretty much all Malick let on in the way of plot… we’re on the outside looking in as we observe scenes of family life — kids playing, mothers comforting her child, kids being disciplined by his father, etc. Those scenes are interspersed with breathtaking imagery that seem to symbolize life’s origins and origins of the universe. 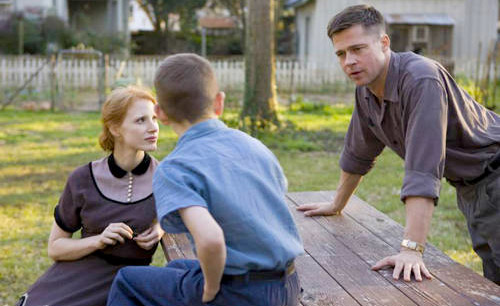 I find it impossible to properly review this film, nor can I find an appropriate rating for this. In fact, even after this film sits with me for 48 hours, I’m still trying to process just what it was that I saw. So what I’m going to tell you is how this film makes me feel. At first I was really intrigued by Malick’s direction and oohed-aahed at the overwhelmingly beautiful nature and cosmic imagery, but about three-quarters of the way in, I actually almost dozed off, spurred by the lack of action on screen and the sweet-sounding classical score by Alexandre Desplat.

In the end, the whole thing left me rather um… indifferent. Even now I don’t have any strong feeling one way or the other, which is odd considering how polarizing this film is. I think the only character I feel some sympathy with is Jack when he was a kid, as he seems to suffer the most from the way his dad treated him, but the rest of the characters fail to engage. Not that the actors’ performances weren’t good mind you, it’s just that these I couldn’t really connect with them. I think Pitt and Chastain are effective in their roles, though Penn is utterly wasted here as he wasn’t given anything to do other than looking lost and forlorn.

I’m also surprised that I didn’t shed a single tear even though I’m a crier. I mean, I bawled my eyes out watching Wall-E! With all that said though, I’m still glad I saw this film. In fact, I recommend people to actually take a chance with this film even if you have trepidation about this based on what you may have read. It’s definitely worth a watch even just to marvel at the cinematography and Malick’s keen eye of capturing nature in its most delightful way.

My husband liken this to seeing a piece of fine art in a museum, sometimes you might not understand what you are looking at in front of you, but it may have the power to touch you in a profound way… but then again, maybe not.
…

Well, that’s the best way I can ‘review’ this film. So what’s your thoughts about this film? I’d love to hear ’em.