Peter Lorre was the epitome of the the Golden Era Hollywood character actor, providing solid support in a variety of movies and TV for more than 30 years. Born László Löwenstein in Austria-Hungary (now the Slovak Republic) in 1904, he ran away from home at age 17 and began to act in theatre. Changing his name in 1925, he worked in Germany, Austria and Switzerland before being cast as the psychopathic child-killer in Fritz Lang’s M (1931), the role that made him famous in Europe, and he worked steadily there.

Like many artists, Lorre fled Germany when the Nazis took over in 1933, eventually landing in London, where Alfred Hitchcock cast him as the villain in The Man Who Knew Too Much (1934). Lorre’s performance in that film brought him to the attention of Hollywood, where he mostly worked in crime and espionage movies, as well as films noir. (Lorre holds the distinction of being the first actor to portray a James Bond villain —Le Chiffre — in a TV version of Casino Royale.)

He frequently appeared with fellow character specialist Sydney Greenstreet; the pair co-starred in 9 films together, most famously The Maltese Falcon, in which their characters are both hunting “the black bird.” Lorre also often acted with Falcon lead Humphrey Bogart, and, while Lorre & Greenstreet didn’t socialize off-duty, Lorre and Bogart became close friends. Lorre reportedly encouraged Bogart to marry Lauren Bacall despite the couple’s 25-year age difference, saying, “Five good years are better than none!”

Where he had been a lead in Europe, in Hollywood Lorre generally employed his distinctive looks and smooth voice in either secondary parts or maniac villain roles. In The Mask of Dimitrios, however, character actors, particularly Lorre and Greenstreet, play the leading parts and, along with suspenseful direction by Jean Negulesco and a subtle script by Frank Gruber, the result is a really great, if little-known, spy noir. Lorre plays Cornelius Leyden, a mystery writer who is intrigued by the tale of notorious spy/con artist/thief Dimitrios Makropolous, whose corpse has just washed ashore in Istanbul. Leyden thinks Dimitrios’ life would make a fascinating novel, so he begins to retrace the deceased man’s path through Europe. 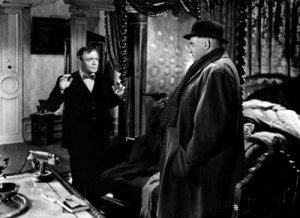 Along the way, he meets the mysterious Mr. Peters (Greenstreet), who doesn’t believe that Dimitrios is dead, and the two strike up an alliance. Negulesco fought to cast Lorre, saying he believed the actor to be the best working in Hollywood at the time, and Lorre doesn’t disappoint. He convincingly portrays Leyden’s determination to get to the bottom of the story, his gradual realization of Dimitrios’ consuming amorality, and his eventual disillusionment. Lorre and Greenstreet play off each other well and the film’s only disappointment is that they are absent from the frequent flashbacks.

The film is not currently available on video but TCM screened it last month, which is sometimes done as a test for possible DVD releases, so I’m hopeful that will happen soon.

Check out The Mask of Dimitrios trailer below:

Thanks Paula for your contribution! Be sure to check out her fun James Bond-related interview with a fellow cinephile Julian Bond on Paula’s new blog Paula’s Cinema Club.

…
What are your thoughts of Peter Lorre? Any favorites from his work?