As TIFF is underway in Toronto starting yesterday, I’ve been anticipating our own Twin Cities Film Fest (TCFF) that’ll be starting in two weeks starting Tuesday, Sept. 20. A couple of days ago the full lineup is finally announced, yippeee!! I am truly excited for this, I think the organizers did a great job getting a great mix of studio features, documentaries, independent movies, and locally-produced films.

I’ve previously reported the films that will open and close the event, which are The Bully Project & Like Crazy, scheduled for Tuesday and Saturday, respectively. Now below is a list of other lineup highlights with info about which filmmakers/actors will be attending:

Summit Entertainment will present 50/50, a film formerly called I’m With Cancer that’s been catching a lot of buzz around film festivals. Inspired by personal experiences, it’s an original story about friendship, love, survival and finding humor in unlikely places. Joseph Gordon-Levitt and Seth Rogen star as best friends whose lives are changed by a cancer diagnosis in this new comedy directed by Jonathan Levine from a script by Will Reiser. Star Anna Kendrick will be conducting a Q&A following the film.

Looks like I’ll be packing lots of tissues to see this one. Even from the trailer, it looks like it’ll be an emotional and heart-wrenching movie about how a 27-year-old man deals with his diagnosis. Levitt consistently turns in a good performance but looks like he ups the ante in this one. Check out the trailer below:

White Knight is also another unlikely comedy that deals with a hot-button subject matter. It tells the story of the Leroy Lowe, a Grand dragon of the Texas Ku Klux Klan who confronts everything he’s been taught to hate when a Hispanic field worker becomes his cellmate. There’s also has an unconventional love story between Leroy and Madalena, a beautiful Mexican maid hired to clean the warden’s office.

The main cast from the film, Tom Sizemore, Hector Jimenez, and Olga Segura will also host a Q&A after the film.
…

Wahooooooo!!! [doing a little dance with both hands in the air]… ok, now that I’ve got that out of the way… 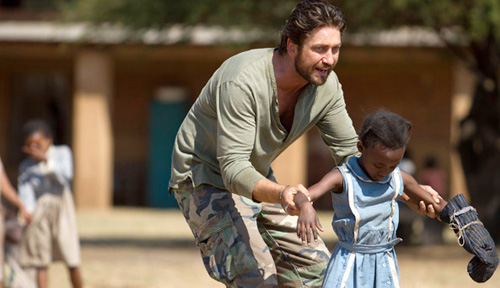 Y’all already knows how much I’ve been anticipating this, so imagine my delight when I heard Machine Gun Preacher is going to be shown at TCFF!! It’s scheduled for limited release on Sept. 23 but it might be another couple of months before it arrives in Minnesota.

In case this is the first time you heard it, this film by Relativity is based on a true story staring Gerard Butler as Sam Childers, a former drug dealing biker who found God and becomes a crusader for hundreds of Sudanese children who have been forced to become soldiers.

I’ve posted the trailer, poster and one of the clipsfrom the movie, but in the last couple of days, I found more stills and clips.

Childers playing with the children, posted with vodpod

Now this is a must-see for any comic fans or anyone who enjoys watching any Marvel superhero movies. With Great Power: The Stan Lee Story is a feature length documentary on the life and creations of Stan Lee.

With Great Power: The Stan Lee Story explores the vivid life and imagination of Stan Lee from the early days of his Great Depression era upbringing through the Marvel age of comics and beyond. The film uncovers original transcripts, illustrations, photographs and stories of Lee’s fascinating journey from his early years at Timely Comics.

Told through the words of Stan himself, as well as numerous interviews with comic book creators, actors, film producers, family and friends, “With Great Power” paints a portrait of a man whose creativity knows no bounds and whose characters have grown from humble beginnings in the pages of Marvel Comics in the early 1960’s to power house properties in all media  – including film, television, video games, toys, merchandising, and beyond.

I definitely will be seeing this one. Stan Lee is such a hugely charismatic guy and his legacy is nothing short of amazing!

Other studio films include the horror comedy Tucker and Dale vs. Evil, Undefeated, which chronicles the Manassas Tigers’ 2009 football season, and Thunder Soul, a story of extraordinary alumni from Houston’s storied Kashmere High School Stage Band, who return home after 35 years to play a tribute concert for the 92-year-old “Prof.”

In addition, Twin Cities Film Fest is excited about the other programming and events for 2011, which will again feature Minnesota films, including different Minnesota Shorts Series,  some Women in Film programming, India Independent programming, panels, and a special screening of Fargo.
…

Minnesota film fans, I hope you can set aside some time to support this wonderful event! As for the rest of you, are you interested in any of these fims?