To conclude the trilogy of our Movie Villains post, I’ve resurrected the post I did nearly 2 yrs ago after I saw Public Enemies. I found the Michael Mann movie to be rather disappointing, but one thing is certain, Johnny Depp makes for a charming bad boy, the notorious bank robber John Dillinger. Hollywood does this all the time, making a ‘hero’ out of otherwise shabby characters. These are the kind of bad guys (obsessive stalkers, con artists, psychopaths, what have you) that makes us root for them despite their wickedness as we’re mesmerized by them more than we should be. In many cases, they not only steal the movie, they steal your heart in the process. Yes some are popular picks but I decided to include ’em because their performances hold up well after repeated viewings. So here they are listed in random order (it’s hard enough to pick just ten, I spare myself the task of ranking them): 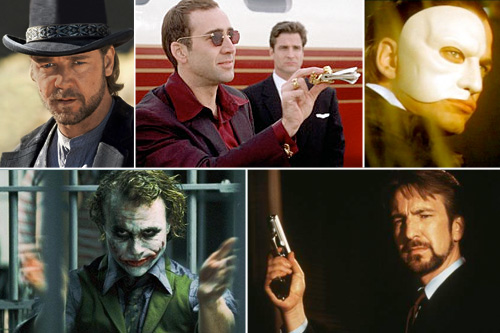 1. Ben Wade in 3:10 to Yuma (2007)
I don’t even like Westerns but I saw this one at the theater because of the cast. No doubt Crowe is a charismatic actor who is just as compelling as a hero or a criminal, but as a bad boy, he certainly looked like he had more fun. The Bible-quoting outlaw played by Russell Crowe is a complex yet sympathetic character. Even Dan Evans (Christian Bale), the good guy who escorts Wade to the 3:10 train to Yuma, can’t help being drawn to the guy. The battle of wills between the two of them is the essence of the film right up until the end, with Wade having the last close-up and the one we remember more long after the movie is over.

2. Castor Troy in Face/Off (1997)
This despicable character is fascinating to watch, played by both John Travolta and Nicolas Cage. When playing Troy, each actor get the best lines and both seem to have more fun playing that character than the good guy Sean Archer. I probably give Cage the edge over Travolta as Troy, he is so over the top with his crazy eyes and flamboyant swagger, he seems to truly relish being a deranged maniac. I do enjoy Travolta’s performance in the prison-visit scene though, torturing the utterly-deflated Archer with utmost glee… “Ohhhhhhhhweeee, you good-lookin.” Man, I love this John Woo flick!

3. Phantom/Erik in Phantom of the Opera (2004)
When I saw this movie back in December 2004, I had no idea who Gerard Butler was. But just one look at this seductive brooding ‘opera ghost’ and you’ll know why Christine’s lured by him. Despite being the world’s biggest stalker, the Phantom’s extreme obsession is beguiling, yes even tantalizing. “Touch me, trust me, savor each sensation…” The Phantom sings, and with that Christine is cast under her spell… along with practically every woman watching that scene. The half-deformed rogue is supposed to be an ugly creature not much to look at, but it’s hopeless to try take your eyes off this Phantom. He’s the kind of bad boy who makes it impossible to root for the suitor. Raoul who??

4. The Joker in The Dark Knight (2008)
The role that eclipsed the Dark Knight himself, The Joker steals literally every scene he’s in from the moment he appears on screen. With his maniacal laugh and strange gestures, the agent of chaos is obviously a scary creature but also pretty darn funny! That pencil ‘magic trick’ for example, it’s both comical but unsettling at the same time, and that interrogation scene with Batman when he’s got his head slammed onto the table, “Never start with the head, the victim gets all fuzzy.” I laugh so hard every time! The more I watch this movie, the more I become fascinated by Heath Ledger’s incredible performance, he was practically ‘lost’ in the quintessentially evil character that might’ve cost him his own life.

5. Hans Gruber in Die Hard (1988)
The masterful performance by Alan Rickman always made the list of ‘best villain’ and rightly so. He’s cruel and ruthless but yet so refined, elegant and polite that I can’t help being strangely attracted to this ruthless criminal. Oh, there’s the voice, too, that silky smooth delivery that only Rickman could do. Gruber offers such a stark contrast to the crass and ‘everyman’ John McClane (Bruce Willis) and made the game of cat and mouse so much more fun to watch. Oh and that death scene, still one of the most memorable movie climax ever! 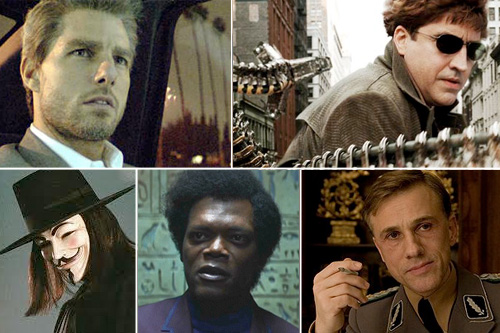 6. Vincent in Collateral (2004)
I’ve never been a huge fan of Tom Cruise, but reading the good reviews intrigued me to see this one. I’m sure glad I did, it’s a great thriller and Cruise is astounding as Vincent, a contract hit man on assignment one fateful night in L.A. The mega star rarely plays bad-guy roles throughout his career, but he really should do more of ’em. Sporting scruff, salt-n-pepper hair, and shark-gray suit, it’s a striking look on the naturally handsome actor. Vincent is meticulous with his craft but he manages to appear amiable on the surface. Even his victims fall for his charm… only to realize too little too late that the person right in front of them is pure psycho ready to take a life without a hint of remorse. Jamie Foxx is excellent as the ill-fated cab driver, but Cruise definitely steals the show.

7. Dr. Octopuss in Spiderman 2 (2004)
Alfred Molina is one of my favorite character actors, so when he was cast as the villain in this movie, I was in for a treat. The biggest nemesis often start out as friends, and the same with scientist Otto Octavius and Peter Parker. In fact, Peter looks up to Octavius, but one devastating scientific experiment gone awry changes all that. I see Doc Ock as much a victim as he is a villain — he’s overpowered by those mechanical tentacles he helped create that despite his brutal shenanigans, I never quite despite his character. His fight scenes with Spidey is so awesome that it deserves to be on this list. I think Spiderman 2 is easily the best of the franchise largely because of the compelling villain.

8. V in V for Vendetta (2006)
I’ve written an entire post on this very character, giving my homage to Hugo Weaving’s spectacular feat of acting entirely behind a mask. As I said before, no matter how you look at it, V is a ruthless and dangerous terrorist. Saying that he’s morally ambiguous is putting it mildly, because no matter how you look at it, the masked vigilante is basically a radical extremist. But anyone watching the movie will be hard-pressed not to root for the other guy and be mesmerized by Weaving’s masterful performance. His inimitable speaking voice sounds even more distinct and hypnotizing under that Guy Fawkes mask. That self-introduction scene when he rescues Evey from the corrupt police is one of my favorite scenes of all time (see the clip on the V post above).

9. Elijah Price in Unbreakable (2000)
This is the movie that makes me believe M. Night Shyamalan is not a lost cause. Unbreakable is one of my favorite mystery thriller of all times and boasts not one but two of the most intriguing cinematic characters. Price is the ultimate tragic figure, a man disillusioned and embittered by his debilitating brittle bone disease to the point of becoming a mass murderer. But watching the comic book dealer, you can’t help being drawn to his sophisticated and cultured persona… it also seems customary that memorable villains are impeccably dressed and his fashion style isn’t just stylish, they say something about who they are. I enjoy watching both Samuel L. Jackson’s and Bruce Willis’ unusually nuanced performances as they’re sort of playing against type as polar opposite individuals who cross path under the most incredible circumstances.

10. Col. Hans Landa in Inglorious Basterds (2009)
Quentin Tarantino’s got a knack for casting charming bad boys (Hello Mr. Blonde), but he outdid himself when he cast Austrian veteran actor Christoph Waltz as the villain that practically ‘dwarfs’ every other actors in the movie. He is such a nasty piece of work who only cares about his well-being. He’s not even loyal to the Third Reich because he firmly believes in its cause, he’s just in it because it benefits him at the time. If another leader with a totally different viewpoint comes along, I don’t think he has qualms about switching his allegiance so long as there’s something in it for him. He’s spine-chillingly sinister but yet so darn charming and quite hilarious, sometimes he conveys all three at the same time in just the way he delivers a line! The suspenseful opening scene stretched my nerves to their snapping point, but  Every award the film industry had that year for Supporting Actor, they gave ’em all to Waltz and rightly so. He’s one of the major reasons I was rooting for Basterds to win Oscar’s Best Picture!

Please note that I decided to leave out female villains and those from animated features as they deserve to have on their own list.
…

What do you think, folks? Any particular cinematic bad boy(s) stood out to you?