The 2011 Jane Eyre’s film adaptation I’ve been waiting for quite a while opens today… alas, only in limited release. So that means I have to wait another two weeks before it finally opens in my neck of the woods. 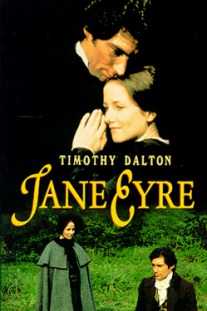 My love for Jane Eyre started out perhaps five or six years ago when I came across this YouTube fan-made music video of the BBC 1983 version set to a Hoobastank’s song The Reason, an odd choice of song I thought but it kinda works for the story. In any case, it prompted me to rent this miniseries from Netflix, as well as bought the book (though I’ve only read the later half). I’ve also since seen two additional TV adaptations, the 1997 one with Samantha Morton and Ciaran Hinds and the most recent BBC adaptation with Ruth Wilson and Toby Stephens in 2006, but neither one ever came close to replacing the 1983 version. The reason? Well, isn’t it obvious? Timothy Dalton as Rochester, of course!

Yes, the production quality is far from perfect — poor lighting, uninspired costumes and sets and the totally dull, almost irksome music leave much to be desired. But once Dalton appears on-screen, you won’t notice ’em … or anything else for that matter. I love how faithful this miniseries is to Charlotte Brontë‘s vision, much of the dialog are taken from the book and the actors did a remarkable job delivering them convincingly. Zelah Clarke as Jane looks like a midget next to the 6’2″ Dalton and sometimes it’s a bit distracting, but her performance was strong and full of conviction which creates a powerful dynamic between the two.

Dalton is absolutely astounding as the ultimate Byronic hero. With that voice and screen presence, he’s born to play this role. I initially thought he’s far too handsome for a character that’s described in the book as someone ‘not possessing of a classic good looks.’ Though I’d be hard pressed to find a woman who thinks Dalton is ugly, we must remember that this was written in the 1800 where the standard beauty is fair hair, fair skin, with some kind of Greek statue-like features. So with that in mind, Dalton with his square jaw, dark hair and rugged, masculine features fits the physical description of the role nicely. But more importantly, he captures the essence of Rochester’s persona, the flawed hero with mercurial mood, ill temper, and a torrid past that still haunts him and ravages him with guilt.

Dalton imbues the complex character with such fire that makes other actors’ interpretation pales in comparison. Some plays the character way too angry who’s practically yelling the entire time (Hinds) or too romantic and a bit oversexed (Stephens). I know I’m going to get a lot of flak for saying that as that adaptation and specifically Stephens have a massive following, but hey, it is what it is. I really think Dalton’s interpretation is superior as he’s got a nice balance of danger, passion and longing, all the while retaining that mysterious and unpredictable aura about him that makes him so unnerving but yet so darn attractive. Rochester is the quintessential tortured soul and in Dalton’s eyes, that pain and forlorn-ness is apparent, especially in the scene where Jane was about to leave him for good, you could see his desperation and fear of losing her. There’s that frailty in him as he hits that breaking point and THAT scene to me is what sets Jane Eyre apart from other period romance. Dalton himself has said this role is one of his best works, and I absolutely concur. He totally sets the bar for the performance for me, or as my friend Prairiegirl said to me when I lent her my dvd recently, ‘Dalton spoiled it for me. I doubt anyone else will ever come close…’

Well, I’ve been going on and on about how terrific Dalton’s Rochester is. But why don’t you just check it out for yourself in some of my favorite scenes:

I knew you would do me good in some way, at sometime… I saw it in your eyes when I first beheld you…

And how do people perform that ceremony of parting, Jane? Teach me; I’m not quite up to it.

Do you think that because I am poor, obscure, plain, little that I am soulless and heartless?

I must leave you (in two parts):

Mr. Rochester, I no more assign this fate to you than I grasp at it for myself. We were born to strive and endure–you as well as I: do so. You will forget me before I forget you.

Now that the 2011 version is out, here’s my review on the film and how Michael Fassbender’s performance as Rochester fare against Dalton’s.

Now that I’ve shared mine, tell me who is your favorite Rochester and why?