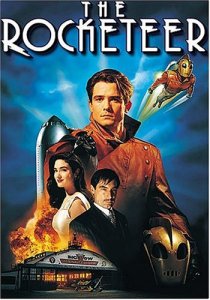 A couple of days ago, I saw Jennifer Connelly in the red carpet of The Tourist premiere with her husband Paul Bettany. As you can see in the poster, Connelly and Timothy Dalton co-starred in The Rocketeer back in 1991, and now her husband is co-starring with Dalton in The Tourist.

It turns out this post has been in my draft folder since August, around the time when I read this Hero Complex blog post back in August titled ‘The Rocketeer’ — a retro adventure that was ahead of its time. Apparently a theater in L.A. was hosting a special month-long Disney screening series at the time. Oh, how I wish I could’ve seen this one on the big screen.

I remember seeing The Rocketeer with my older brother when I was in high school. It had everything you could possibly want in a movie: comic-book style action adventure, espionage, romance and cool visuals. Based on a graphic novel, the story takes place in a few years prior to WWII in 1938 and focuses on a young stunt pilot Cliff, who stumbles onto a prototype jet-pack that allows him to become a high flying masked hero dubbed The Rocketeer. Of course things starts to go awry when the Nazis want the device for their evil plans.

Well, one of the best things about the movie is undoubtedly the deliciously charming baddie, Neville Sinclair. He is Howard Hughes meets Errol Flyn meets James Bond… played to perfection by Dalton. It’s hard not to swoon for his suave and sexy portrayal, in fact, he’s the one I couldn’t take my eyes off. This is a text-book example of a supporting character completely overshadowing the protagonist, played by boyish Billy Campbell. The Hero Complex article aptly described him as ‘sly and rakish’… and Shakespearean actor used that debonair sensibilities to the max in trying to seduce Cliff’s girlfriend, the aspiring actress Jenny (Connelly).

Director Joe Johnston (who’s currently working on Captain America) made a perfect casting choice in Dalton. I can’t imagine anyone else playing the role of a Nazi spy disguised as a swashbuckling movie star, inspired by the real actor Errol Flynn (apparently, an authorized biography of the classic actor painted him as a Nazi sympathizer – per Wikipedia). Sinclair is right up there with Alan Rickman‘s Hans Gruber as my favorite villains of all time.

Take a look below of a couple of clips from the movie. If you haven’t seen this one, it’s definitely worth a rental! Need more proof? Read Marc’s full review at GoSeeTalk.com.