Happy Friday all! It’s kind of a meh weekend for me as far as movie releases is concerned. There’s none opening tomorrow that I’m even remotely interested in: the animated superhero-deconstruction Megamind with Will Ferrell & Brad Pitt? Maybe a rental, just maybe. Due Date? Cool poster, but I just don’t find the trailer all that funny nor do I get the appeal of Zach G., he’s just not as likable as say, Jack Black. So, Robert Downey’s hotness notwithstanding, it’s a definite skip for me. 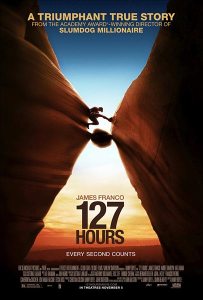 Now, I was intrigued by Danny Boyle’s 127 Hours from as far back as last November, but as I told Castor of Anomalous Material, I think I might pass out watching the amputation scene, as did several a few people who saw this at various film festivals (read here how this movie knocking audiences out, literally!). watching the screening at . As you probably already know, 127 Hours is based on the true story of mountain climber Aron Ralston’s (played by James Franco) five-day ordeal pinned beneath a fallen boulder in a Utah canyon, which led to him hack off his own arm with a dull blade. Ok, I wince just typing that very sentence!

If I do get to the theater, I might catch up on Social Network as I’m like the last person who hasn’t seen it! But I’m not going to sweat it if I don’t get to it, as I have a bazillion Blu-ray movies that I’m hoping to get through this weekend, thanks to my pals Vince and Ted (NOT to be confused with Bill & Ted :D) who lent me a few of them. Below are the Blu-ray movies waiting for me at home, now the challenge is which one should I watch first???

Blade Runner
I have only seen bits and pieces of the first one, but everyone’s been saying how fabulous this sci-fi cult classic looks on Blu-ray. (updated 11/8: My write-up on Blade Runner can be seen here)
…

Days of Heaven
As we were talking about Terrence Malick’s work a few weeks ago, Ted highly recommended this one. I kinda thought Richard Gere is an odd choice but the story looks intriguing and it’s Malick, so it’s got to look beautiful.
…

Master & Commander
Well, apparently posting about Peter Weir’s work without having seen this movie is practically criminal (right Sam? I know you’re thinking it :)) Then Prairiegirl’s comment convinced me even more!
…

Watchmen
I’ve seen this one in the theater and quite enjoyed it, but Vince raved how this is one of those must-haves on Blu-ray. The trailer is one of my all-time favorites!
…

…
Well, now you know what I’ll be watching. What are you going to watch this weekend?