Upon hearing news last week that Zack Snyder & co. are looking for a middle-aged Superman (though he specifically mentioned 35-40, now since when is that middle aged??!), I immediately conjured up a list of actors previously starring in Snyder’s movies worth considering. But before I posted that list, my blogger friend Sam from Banana Oil Movies came up with an utterly brilliant casting idea that I practically threw my list away! She suggested Eric Bana for the role, and you ought to pay a visit to her post to see her rationale. I can’t believe I didn’t come up with that myself as I adore the Aussie actor and as Sam pointed out in her post, though at 42 he’s 3 years older than Mad Men‘s fans’ choice Jon Hamm, to me he actually looks much younger and I think he’s got the right physique and talent to pull off both Superman AND Clark Kent.

You might’ve seen this fan-created photo of what Hamm might look like as Supes. I personally think that looks like a botched Photoshop job and as this article says, might actually hurt the actor’s chances for the role. Well, I promised Sam I’d attempt to do my own Photoshop job of visualizing what Bana might look like as both the Kryptonian hero and his bespectacled alter ego, so here we go: 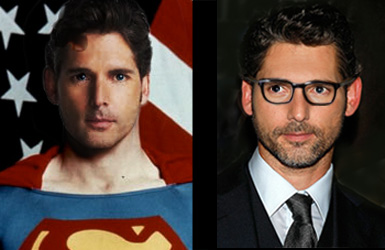 Well, what do you think folks? Did I convince you? 😉 It didn’t take me long to create the Clark Kent version, but the Superman one is a bit tricky. Christopher Reeve is such a perfect Superman that everyone else just didn’t come close. Even looking at Brandon Routh’s photos, he’s lacking that ‘IT’ factor that Mr. Reeve possessed. He’s obviously extremely good looking and had the quintessential chiseled-look, but yet there’s nothing effeminate about him (Routh kinda look too pretty in the film, though it’s likely the makeup people’s fault). I think the same could be said about Bana in that he’s definitely a man’s man. Plus the guy certainly can act, he can do intense (Munich, The Other Boleyn Girl), great at fighting scenes (Troy), and has a romantic/vulnerable side (Time Traveler’s Wife). He was great in Ang Lee’s Hulk, too, I hope the studios don’t think of that movie’s failure as Bana’s fault, as it certainly wasn’t the case. However, the actor himself might be weary of taking on another superhero role because of that though, which is a huge pity.

In any case, all this casting speculation is kinda fun. While we’re at it, why stop at just the main character? You know who I’d love to see as General Zod, now I’ve got some ideas for Lois Lane. I thought I’d start with those who’ve worked with Zack Snyder before, and since we’re going with a middle-aged hero, I should think we want someone mature enough as his love interest. How about 37-year old Lena Heady (300), or 39-year-old Carla Gugino (Watchmen)? Or maybe Abbie Cornish (Sucker Punch)? She’s 28, which is 5 years older than Kate Bosworth at the time she was cast in Superman Returns.

Well readers, I’d love to hear what you think of these casting choices. Agree, disagree? Let’s hear it!