Since I didn’t post any new trailer all last week, I thought I’d make up for it this week. Both have British actors in the lead roles, but they can’t be more dissimilar from each other.

I’ve been anticipating this flick for a while now, as I’m a big fan of Simon Pegg and Nick Frost. They’re back together again since the comedy hits Shaun of the Dead and Hot Fuzz. Last April I dedicated an entire upcoming-flix-spotlight post with some stills and behind-the-scene video.

The concept just sounds like a hoot and tailor made for real-life BFFs: Two British comic-book geeks traveling across the U.S. (to attend the San Diego Comic Con, no less) encounter an alien named Paul outside Area 51 and ended up helping him run from the US government. Now tell me that doesn’t have the perfect recipe for comedy! And with a cast that includes Jason Bateman, Kristen Wiig, Bill Hader, Jane Lynch, Seth Rogen (as the voice of the alien), AND Sigourney Weaver, what’s not to love? The last time Weaver was in a sci-fi comedy was the wonderfully zany Galaxy Quest.

….
Now the teaser trailer definitely got me even more excited! I was laughing right from the moment that Dr Evil & Mini Me dance song came on… I don’t know but I’ve always found that song hilarious ever since Austin Powers!  This promises to be a stellar entertainment for geeks and non-geeks alike. Too bad we have to wait until March 18 of next year! 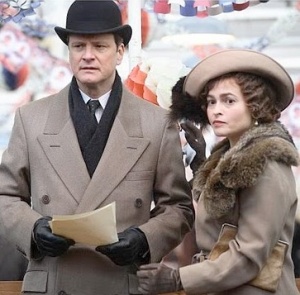 I first heard of this movie when Hollywood Spy posted a photo of Colin Firth and Helena Bonham Carter in a period costume. I’ve always liked period drama based on the English royal, something about them just fascinated me. This time it’s based on the true story of King George VI (the father of the current queen Elizabeth II), who unexpectedly and reluctantly assumed the throne when his brother Edward abdicated the throne. Plagued by a dreaded stutter and considered unfit to be king, George “Bertie” sought the help of an unorthodox speech therapist named Lionel Logue. Through a set of unexpected techniques, and as a result of an unlikely friendship, Bertie was able to find his voice and boldly lead the country through war.

…
The King’s Speech‘s got all kinds of buzz around film festivals this year, including winning the Top Audience Award at TIFF. Firth is now considered a shoo-in for Best Actor and the film itself a major contender in next year’s Oscar race. Oscars love awarding actors who portray real-life heroes and especially those with disability (Dustin Hoffman in Rain Man, Jamie Foxx in Ray, Geoffrey Rush in Shine, etc), and the fact that a lot of people think Firth was robbed of his Gold Statuette last year, perhaps 2011 is his year. I really like this trailer, it’s a tearjerker but looks funny as well. That scene where he stuffed his mouth with marbles and told to enunciate reminds me of Eliza Doolittle in My Fair Lady. I might try to catch this in the theater around Thanksgiving. It’s released in the US on November 26th.

Well, anybody else anticipating either or both of these films?

28 thoughts on “Conspicuous trailers of the Week: Alien comedy PAUL & The King’s Speech”