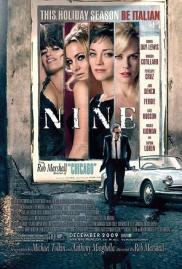 “Style is the new content,” Kate Hudson’s character Stephanie, an American fashion journalist working for Vogue told Guido Contini. Well, that’s about sums up the sensibility of this movie, which is nothing short of style over substance.

Based on Frederico Fellini’s 8-1/2 (reviewed by guest blogger Rockerdad), it centers on the renowned Italian director Guido Contini (Daniel Day-Lewis) who’s having a serious writer’s block and personal crisis right in the middle of filming of his new movie. Apparently Guido is so highly regarded that when any project he sets his sights on will get green-lit even without so much as a script. So the million dollar set is built, costumes are designed and sown, famous movie stars are cast… but, nobody knows what the story is all about. All the constant attention, pressures from the media, and the producers anxious to hear what he’ll do next all caving in on him like a landslide and Guido is trapped underneath, gasping for air.

At the center of it all is the women that encircles him, both from the past and the future: his wife Luisa (Marion Cotillard), his mistress Carla (Penelope Cruz), his film star muse Claudia (Nicole Kidman), his confidant and costume designer Lilli (Judi Dench), an American fashion journalist Stephanie (Kate Hudson), the whore from his youth Saraghina (Fergie) and his mother (Sophia Loren). Each of these women and their encounter with the director offers a glimpse of Guido’s eccentricity and reveals what a flawed ‘hero’ he is. 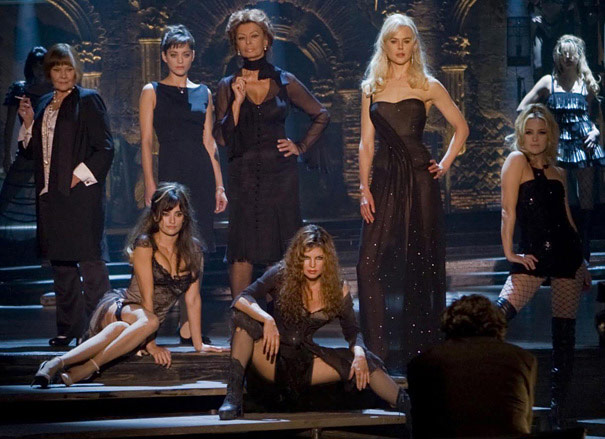 When I first heard about this movie last Summer, I thought ‘Wow, this is going to be a massive hit when it’s released during the holiday season!’ Just looking at the impressive cast and Rob Marshall’s cred as the director of the Oscar’s Best Picture winner Chicago, it seemed that this one is destined for success. Alas, this was perhaps one of the biggest flops of last year. Its domestic total barely made up a quarter of the $80 million budget! (per Box Office Mojo) and it bombed critically too, earning a paltry 36% on RottenTomatoes. The consensus on RT says: It has a game, great-looking cast, led by the always worthwhile Daniel Day-Lewis, but Rob Marshall’s Nine is chaotic and curiously distant. I concur. 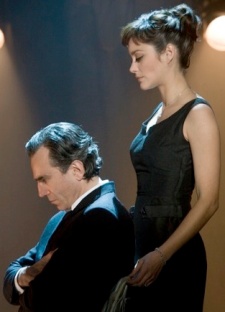 Now, I’m not saying the movie is a complete waste of time. It’s sort of the case where the parts are actually greater than the whole, as some of the song/dance scenes are quite memorable, though when put together as a movie it’s all a bit… disconcerted. Before I get to the scenes, let me just talk about the performances. Now, Day-Lewis is a maestro in acting, so even in a not-so-great movies, this guy still delivers a solid rendition of the main character. So he didn’t really shine like a new penny, as he spends most of the time sulking and all discombobulated, but that is what Guido is all about and Day-Lewis captures it perfectly.

But among the female cast, my favorite has got to be Luisa, Guido’s former-film-star wife. Luisa gave up acting when she marries Guido, but she’s constantly abandoned by her husband. She laments about her pain in the musical sequence ‘My husband makes movies,’  it was sung beautifully by the sublime Marion Cotillard. I love the melody of the song, but especially the words and the way she sings them. No wonder she won an Oscar for her performance as French singer Edith Piaf in La vie en rose. In her IMDb trivia, it’s said that ‘if she had not been an actress, she would have liked to become a singer’ No doubt she would have a flourishing career in that as well. Cotillard is also the only cast member who has two musical numbers in the movie, Take it all is much more spirited and wildly sensuous but still kind of sad when you listen to the lyrics.

I love these two songs much more than the robust Cinema Italiano, performed with radiance and vigor by Kate Hudson. It’s obviously the more marketable as it’s used in the trailer. It’s enjoyable but just like the movie, it’s highly superficial. I think I like Luisa’s songs better because they’re much more poignant and heart-rending. The other memorable numbers are Penelope Cruz’s sexually-charged performing the ironically-named “A Call from the Vatican,” and the sentimental Unusual Way by Nicole Kidman.

Overall, I enjoyed it and the songs are quite memorable. For sure I won’t buy the dvd, but I just might order the soundtrack!

What do you think of NINE?