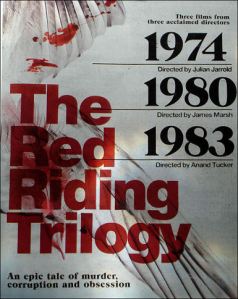 I came across this when I overheard hubby playing the trailer on Apple site. I don’t like scary movies, I’m not talking about horror which I detest, but even some intense mystery stuff would haunt me for days. This one sounds like it might be that kind of film, see the trailer below for yourself. But it piqued my curiosity enough for me to learn more about it and here’s what I found.

From the Apple trailer site:
Sure to be one of the cinematic events of the year, RED RIDING is a mesmerizing neo-noir epic based on factual events and adapted for the screen by Tony Grisoni (FEAR AND LOATHING IN LAS VEGAS) from David Peace’s electrifying series of novels revolving around the manhunt for the “Yorkshire Ripper,” a serial killer who terrorized northwest England in the 1970s and ’80s. The three films are directed by three notable filmmakers — Julian Jarrold (BRIDESHEAD REVISITED), James Marsh (MAN ON WIRE) and Anand Tucker (SHOPGIRL). Each boasts a stellar British cast that includes Andrew Garfield (THE IMAGINARIUM OF DOCTOR PARNASSUS), Sean Bean (LORD OF THE RINGS), Paddy Considine (DEAD MAN’S SHOES), Rebecca Hall (VICKY CRISTINA BARCELONA), and Peter Mullan (TRAINSPOTTING). The RED RIDING TRILOGY screened at the Telluride and New York film festivals and will open in New York on Friday, February 5 at the IFC Center, with a national release to follow.

One of Dark Horizon’s picks of 2010 Notable Films, this one apparently has already been released on DVD & Blu Ray in Europe. ScreenRant posted the excerpt from the official Press Release that explains what each of the three films cover:

1974, Yorkshire – a time of paranoia, mistrust and institutionalised police corruption. Rookie journalist Eddie Dunford (Garfield) is determined to search for the truth in an increasingly complex maze of lies and deceit that characterises a police investigation into a series of child abductions.

In the second episode, directed by Marsh and set in 1980, The “Ripper” has tyrannised Yorkshire for six long years, and with the local police failing to make any progress, the Home Office sends in Manchester officer Peter Hunter (Considine) to review the investigation. Having previously made enemies in the Yorkshire force while investigating a shooting incident in 1974, Hunter finds himself increasingly isolated when his version of events challenges their official line on the “Ripper”.

In the final instalment, directed by Tucker and set in 1983, another young girl has disappeared and Detective Chief Superintendent Maurice Jobson (David Morrissey) recognises some alarming similarities to the abductions in 1974, forcing him to come to terms with the fact that he may have helped convict the wrong man. When local solicitor John Piggot is persuaded to fight this miscarriage of justice he finds himself slowly uncovering a catalogue of cover ups.

The last time I saw a similar collaboration piece was Paris Je T’aime, where 12 different filmmakers tell their own story about love in Paris. But this is different in that each film is interwoven together instead being a standalone piece that share a single theme.

According to the Dark Horizon’s article, this movie is “… described as grim, extremely violent and ‘unrelentingly bleak,’ reviews for the series were mixed but generally positive…’ I definitely will check this out on DVD mostly for the excellent UK-based cast. Paddy Considine was excellent in In America and I’ve always liked Sean Bean even before he was Boromir in LOTR. David Morissey is another English actor I wish would get more roles here in the US, I first noticed his excellent performance in Framed opposite Timothy Dalton. I’ve never seen Andrew Garfield before but he’s been getting some mentions by movie sites as one of today’s rising stars.

Recently gaining praises at Colorado’s Telluride Film Festival, the buzz didn’t escape studio execs as Columbia has bought the rights to create a feature film version. Variety reported that workaholic director Ridley Scott has been tapped to direct, not sure when he’ll find the time given the 20+ other projects he’s got in development, including the Alien prequel, a Gucci biopic and a movie based on the board game Monopoly (yep, I’m just as puzzled as you are). He might be working with screenwriter Steve Zaillian (Schindler’s List), who’s worked with Scott in American Gangster. The film will be a compressed version of the five-hour running time of the trilogy, and it’ll also be set in the U.S. instead of Britain. Hmmm, the filmmakers sure have high credence behind them, we’ll see if they can match the quality of this one, but of course it’ll be a more mainstream & marketable version.

Anyhoo, check out the trailer below if you haven’t already. Is this something worth checking out to you?