War films are stories writ large about aggression between nations. Few of them explore small-scale human undercurrents of suppressed dissent inside the countries at war. Alone in Berlin (2016) does this by looking at an ordinary working-class couple and their compulsion to express feelings about Hitler’s dictatorship at time when dissent meant certain death. It is also an essay on parental grief struggling to voice pain and loss.

Based on real events, the story opens in a small flat in Berlin where Otto Quangel (Brendan Gleeson) and his wife Anna (Emma Thompson) learn that their son has died in battle. In a long marriage that is under strain, the news pushes them further apart as they cannot console each other in grief. Otto had encouraged his son to join the Nazi army and now Anna blames him for their loss. Desperate to voice his rage against Hitler’s regime, he painstakingly writes postcards and secretly leaves them on stairwells and doorways where they can be seen by passers-by: he calls them “small grains of sand in Hitler’s machine”. Initially he keeps Anna away from his dangerous mission, but she insists on being involved and they both become clandestine resistance fighters whose weapons are simple messages about the evils of Nazism. They manage to write and distribute over 260 cards despite extensive investigative efforts to stop them. In the process, they resurrect their marital relationship. After almost two years of card-writing they are caught and together face Nazi justice. 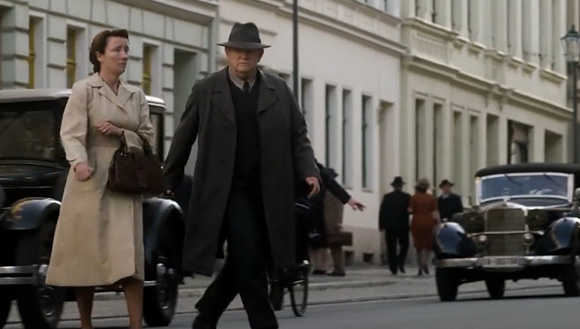 This film has two parallel narratives that start in opposition and end in convergence: one is Otto and Anna’s actions, the other is the investigation. The first is focused on the smallness of the couple’s actions in contrast to the enormous risk they are taking, like a pair of mice squeaking at roaring lions. The filming, colour palette and period setting are drab and lifeless; the atmosphere is paranoid with suspicion and mistrust; and the acting is subdued and understated. Brendan Gleeson and Emma Thompson are actors with broad performance repertoires but here they are minimalist in expression and Spartan in dialogue, with much being conveyed through furtive glances or avoided eye-contact. It is a slow-moving story, observant of small details in an alienated world. This has the effect of amplifying the intensity of Otto and Anna’s actions. Close-ups of a pen leaving a trail of outrage on a small white card become powerful portraits of bravery that are ultimately futile as most of the cards were handed in to authorities. The couple’s nemesis is a young German investigator (Daniel Brühl) who pursues his work with ideological fervour for the Fuhrer but whose success turns into the film’s most devastating moments of despair. 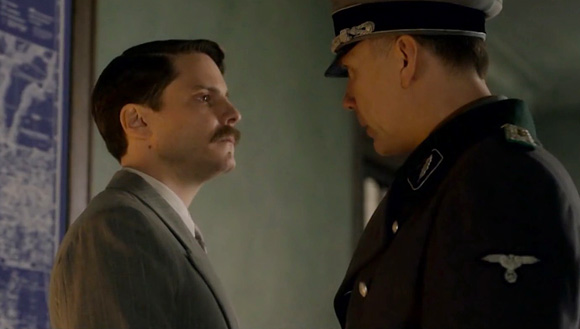 This is a joyless story about humble heroism. Otto and Anna are emblematic of ordinary people dealing with tragedy and anger inside a world of fear and danger. Far from being mere victims, their small protests seriously unsettled the Nazi hierarchy and the closing scenes are a tribute to the power of two human “grains of sand”.

Have you seen ‘Alone in Berlin’? Well, what did you think?