The recent news that one of Robert Ludlum‘s novels is getting a big screen treatment got me curious and excited. Ludlum is best known by movie goers for his Bourne series, which was one of the most successful spy franchise in Hollywood.

It’s one of Ludlum’s better books and also with big name talents behind the scenes, Brian Grazer and Ron Howard are producing while Chinese film director Yimou Zhang will be in charge of bringing the book to life; I do hope we get to see a great spy/action thriller without the names James Bond or Jason Bourne attached to it. Also, this will be Zhang’s first American-produced film, I wonder if he can handle the pressure of producing a tent pole type of picture without losing his artistic integrity. I know many foreign born film directors just couldn’t handle the work environment in the Hollywood system.

For this post I’m just going to gloss over the plot of the book, pretty sure it won’t be a direct adaption since the book came out in the early 80s and dealt with the current political climate at the time. I’ll also give my thoughts on who should be cast the main leads and how they can make the story more relevant to our current events. I read the book in college so it’s been a while, I’ll just go over the main storyline since I don’t remember much of it and don’t worry I won’t give out any spoilers, the book has lots plot twists.

The book starts out with an intelligence officer named Michael Havelock witnessing the execution of his partner and lover Jenna Karas in Costa Brava, Spain. Havelock works for the US black ops division called “Consular Ops”, think of the group as the IMF from the Mission: Impossible films or MI:6 in the James Bond flicks. Karas has been marked for execution because she’s apparently a KGB double spy. After witnessing this tragic event, he left the intelligence world and trying to find her killers and seek revenge. He traveled all over Europe and while in Rome, he met up with a top director of the KGB named Pyotr Rostov. Havelock wanted to know why the KGB decided to execute Karas but Rostov denied that she’s even an agent of the KGB. Later he saw Karas at a train station alive and well, but when she saw him, she looks frighten and flees before he can get close to her. He pursues her but she’s nowhere to be found. Now confused and angry, he decided to reach out to his intelligence colleagues so he can find her. While on this search for his lover, he got involved in some political conspiracies, which involves assassinations, shoot outs and everything you’d expect from a spy novel.

The book’s storyline is obviously out of date since it dealt with the cold war of the early 80s. So I’m curious to know how they’re going adapt it into a film that would fit into our current world events. Comparing to other of Ludlum’s books, this one was more a of suspense/romance/thriller than the other books he wrote, most of them were straight up action/adventure. As mentioned earlier, this will probably be Zhang’s first Hollywood film and I think he can incorporate his talents into this movie. He’s done a lot of dramas but also he can do action scenes. Although I don’t recall the book contains any huge action scenes like the Bourne series, but I’m sure the screenwriter will come up with something. After all I’m assuming this will be a $100 mil+ action summer flick. I do hope they make into something different than another James Bond or Jason Bourne rip off, like I said the book was more of a romance and suspense than straight up action thriller.

Casting wise, I would love to see they cast Richard Armitage as Haverlock, if you’ve seen the show MI: 5 or Spooks then you know he’ll be a perfect fit as a spy. But since this is a big budget production, I don’t know if his name is well known enough to get him an audition.

It’s at times like this that I wish I were a casting director! I absolutely concur with Ted’s pick here (natch!) and we both agree that Armitage would make a fine Bond, the ultimate super spy.

I’m re-posting this badge I made for that Bond casting article [he’s now 42]: 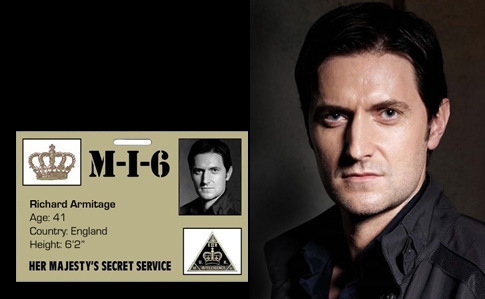 I think the fact that he’s played Thorin in The Hobbit makes him a bit more well-known to mainstream US audiences (he’s pretty famous in the UK for his various BBC/Sky TV roles). Besides, I actually think that casting a non mega-star would work better for the role as there’s less *baggage* associated with a movie star.

It’s not just his brooding good looks that make me a fan, but Richard’s got an undeniable screen presence, versatility and that *tough guy with a heart* persona that would suit the romance angle here. I’m absolutely convinced Richard is more than capable to carry the role of Havelock, described per Wiki as “…an exhausted and embittered veteran operative … Brought over to the United States, he proved an invaluable operative for US intelligence.” So he’s basically a brilliant spy, not just an action guy, with a chip on his shoulder.

Here’s a couple of clips from Spooks that prove he’s got the versatility for action as well as dramatic scenes.

…
Now, if they’re going to cast someone with more fame, then I think Hugh Jackman can play Haverlock. I just hope they don’t go with someone like Tom Cruise, I love Cruise but he’s already Ethan Hunt and Jack Reacher, so there’s no need for him to be consider for this role.

The book has a strong female lead and I would love if Rachel Weisz gets the role of Jenna Karas. If not her then maybe my current actress crush, Rachel McAdams.

The main villain in the book is Arthur Pierce, described in Wiki as Ludlum’s most fearsome villains. I think Gary Oldman would be perfect. Oldman’s been playing too many good guys lately, I would love to see him as a villain again.

I’m a sucker for spy thrillers so I’m looking forward to seeing this book comes to the big screen. Of course a spy movie without the names James Bond or Jason Bourne is a hard sell, for example the latest Jack Ryan movie was a massive failure, so hopefully this one won’t suffer the same faith. Now since project is still in early stages, I don’t know if we’ll get to see it on the big screen anytime soon. I mean two other projects that are based on Ludlum’s books has been announced before and they’re still stuck in development hell. One of them is The Matarese Circle which MGM hired David Cronerberg to write and direct while Denzel Washington and Tom Cruise were attached as the leads. The other project is The Chancellor Manuscript which director Marc Forster acquired the rights to direct it and Leo Di Caprio was attached to star in it. Those are two good books that I would love to see the movie version but again they’re still stuck in limbo and I don’t know when we’ll get to see The Parsifal Mosaic. Hopefully sooner than later.

Have you read The Parsifal Mosaic? Whether you have or not, based on the info above, what do you think of our casting choice?