As you know by now, our new Man of Steel Henry Cavill has been on my radar for a few years now. So a new movie starring him is ALWAYS a good thing. Throw in Bruce Willis and Sigourney Weaver into this fast-paced thriller and I’m definitely game!

A young American (Cavill) uncovers a conspiracy during his attempt to save his family, who were kidnapped while on vacation in Spain.

It’s been almost 3 months since I posted the official poster and full synopsis, and now the trailer is finally here, check it out below:

I must say that if it weren’t for Henry’s casting, I probably won’t be as enthused about this one, but you know what, this trailer actually looks pretty exciting. I like the fact that it was shot on location in Spain which gives it an International flavor. Henry sure kicks ass in this one, but then again his dad is John McClane, ahah. Still, with Ripley er I mean Sigourney as the lethal villainess, Henry just might have his work cut out for him! In all seriousness though, no wonder he was close to be cast as James Bond before the role went to Daniel Craig, he was too young at the time but in a couple of years he definitely could do it if he choose to, though I’d rather see him do other roles.

French-Tunisian director Mabrouk El-Mechri is helming the project, he did the Jean-Claude Van Damme’s biopic JCVD a few years back. I’m certainly glad that at least there is one Henry Cavill movie to look forward to soon since the Superman movie won’t be released until 2013! Man, that is such a long time to wait, but I am convinced Henry will do such a great job as Supes.

As displayed in Immortals, no doubt he’s a capable leading man with a trifecta of star formula: good looks, screen presence and talent. Even his American accent is quite convincing which always helps him be competitive with fellow US actors his age. I sure hope Cavill continues to be cast in Hollywood movies!

What do you think folks? Will you be seeing this come April 6th?

Please note: This is a re-post from a year ago as the new poster has just been released today, as well as new details on the movie.

This movie wouldn’t have been in my radar had it not been for my affinity for Henry Cavill. Could 2012 finally be Henry’s year? After being passed over so many times in iconic roles (Superman and Bond, among others), I sure hope so! I’m so glad he finally nabbed starring roles in a pretty substantial project, the other one being Tarsem Singh’s fantasy flick Immortals as the mythical Greek warrior Theseus.

When I first heard about The Cold Light Of Day months ago, I thought it’d be a small little indie thriller. But since then its profile’s significantly gone up since Bruce Willis and Sigourney Weaver join the cast!

I was asked to remove the original poster I found though I really like it. It’s probably made before the cast were confirmed, but I kind of like it. The color scheme and composition immediately grabbed my attention and no floating heads. Now we’ve got this one that’s released today, 11/6/11, and it’s not as creative but I’m so glad to see Henry front and center as a leading man! 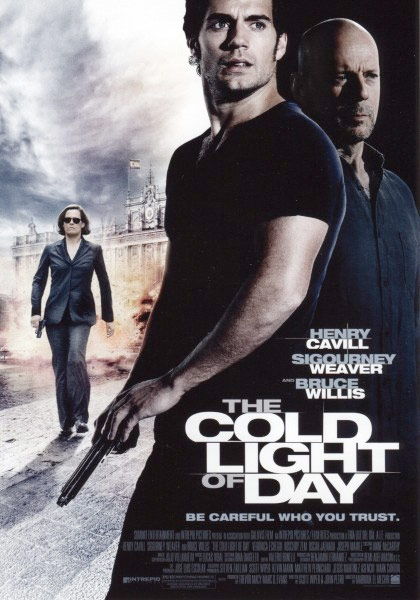 Here’s the updated synopsis per LatinoReview:

When Will Shaw (Cavill) arrives in Spain for a weeklong sailing vacation with his family, the stressed young business man is not in a holiday mood. His startup company just went under and his tense relationship with his disciplinarian father Martin (Bruce Willis) only makes matters worse. But when the family is kidnapped by what turns out to be intelligence agents hell-bent on recovering a mysterious suitcase, Will suddenly finds himself on the run. His whole world turns upside down when Martin reappears, revealing he is an undercover agent tangled in an intergovernmental web of lies and secrets. During a clandestine rendezvous, Martin is killed by a sniper, and Will must find a way to get the rest of his family back alive.

With the kidnappers counting down the hours, the Spanish police breathing down his neck for a murder he didn’t commit and a cadre of U.S. assassins on his trail, Will flees through Madrid, racing to piece together a conspiracy as labyrinthine as the city’s ancient streets. Who can he trust? Who killed his father? And where is the mysterious suitcase that seems to the key to getting his family come safely? In his quest for answers, Will finds Lucia (Veronica Echegui) – a half-sister he never knew he had, who is determined to help him. Bound by their shared kiss, the siblings are a force to be reckoned with, but can they overcome the massive odds against them before it’s too late?

According to the press release posted on Collider site, principal photography had already begun last month, and the film is set and filmed entirely in Spain, and  will be shot over ten weeks in the Community of Valencia and Madrid as well as several weeks on the stages at Ciudad de la Luz studios in Alicante. French-Tunisian director Mabrouk El-Mechri is helming the project, he did the Jean-Claude Van Damme’s biopic JCVD which was surprisingly well-received (85% of rottentomatoes!)

I’m definitely liking the cast, especially Weaver as a villainess will be fun to watch. It’s scheduled for release on April 6, 2012. Can’t wait to see the trailer!

What do you think folks? is this something you’d be interested in seeing?