I have a confession to make. I haven’t seen Bridesmaids nor any of Melissa McCarthy’s R-rated comedies The Heat, Identity Thief, and Tammy. I’m not exactly fond of raunchy comedies with all the foul language and gross situations that I don’t find the least bit funny. But somehow when I saw the trailer for SPY, I was laughing so hard I actually watched it several times before the screening. I guess I love the spy action genre, and the casting of Jason Statham and Jude Law didn’t hurt either. Once the movie starts though, it’s clear that it’s McCarthy who’s the STAR of the show, she’s effortlessly hysterical and here she’s instantly likable. I was rooting for her character Susan Cooper right from the start, when she’s merely a desk-bound CIA analyst who’s desperately in love with a handsome spy (Jude Law).

The story itself is pretty basic. When an operation goes bust, Cooper ends up volunteering to be a field agent and of course, hilarity ensues as she goes undercover to infiltrate the dangerous world of a deadly arms dealer. Just like any Bond or Bond-like movie, of course her mission is to prevent a psychopath villain from getting their hands on a nuclear weapon and save the world. But the plot hardly matters in a movie like this, so long as they keep the comedic moments coming and thankfully they did! Perhaps the fact that I’m not all that familiar with Paul Feig‘s brand of comedy works in my favor as at least it felt fresh to me. 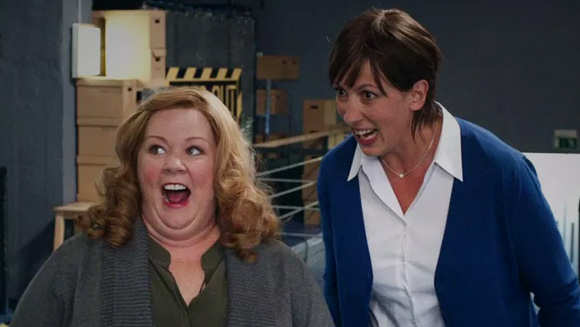 McCarthy herself is such a hoot here, she delivers the laugh from start to finish. It helps to see her paired with someone equally hilarious. Not sure why English comedienne Miranda Hart looks familiar to me as I’ve never seen her before, but I hope she’d get her own movie in the future. She’s simply hysterical and they have such a fun rapport together. If they ever do a movie or TV show with Melissa & Miranda together, I’d so watch it!

As a big 007 fan, of course I love all the Bond references, down to the moment when they go to the Q-branch to get her spy gadgets. The movie’s villainess comes in the form of gorgeous Rose Byrne. I’ve only seen her in a couple of non-comedic roles but she definitely has genuine comic timing. I remember McCarthy said in one of her interviews that Rose’s hair is basically a character in itself and it sure is! Her character is deliberately over the top but she also has some of the funniest bits in the movie “It’s the Bulgarian clown in you.” Ha!

The casting of Jason Statham may seem odd but he got his start in an Guy Ritchie’s action comedy (Lock, Stock Two Smoking Barrels & Snatch) so he’s actually quite a natural here. Of course it’s a hoot seeing him poking fun at himself and a bunch of preposterous action scenes he’s been in. The bit where he’s bragging about surviving all kinds of ridiculous calamity is pure comedic gold! Allison Janney with her deadpan expression is pretty funny too as the no-nonsense CIA boss.

Now, I’ve mentioned that I’m not fond of raunchy, foul-mouthed comedies and so of course there are scenes here I don’t care for. Seriously, those selfies of male genitalia is imbecile, gross and utterly unnecessary. I really don’t think it adds anything to make the movie funnier, and neither are the excessive f-bombs though sadly most people have become desensitized to such things these days. I’m also not that impressed by Bobby Cannavale (Byrne’s real life boyfriend) as this suave but deadly arms dealer. His character is too much of a caricature, so I guess I have more of an issue about how he’s written. Byrne’s character is definitely far more memorable and more fun to watch.

Despite those quibbles, I had fun with this one and I might even rent this later.I might also give The Heat a watch as it also has Sandra Bullock who’s always fun to watch. This movie made me like Melissa McCarthy and I think it’s great that her movies are box office hits! It’s about time we see guys like Statham and Law playing second and third bananas to her, and that we see more and more female-centric movies in general.

Have you seen SPY? Well, what did YOU think?