Finally! After releasing a dozen feature films with all male protagonists, Pixar’s 13th feature film will have a female heroine! And not just an ordinary girl, she is a Scottish princess called Mérida. 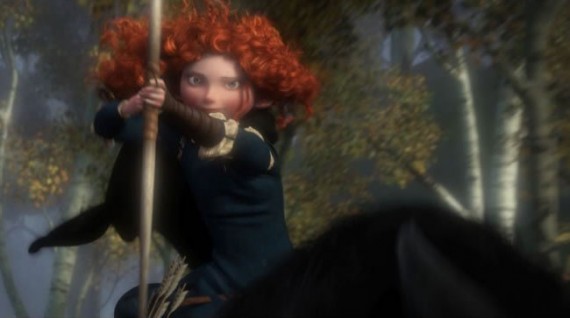 Ooooh, a spunky redhead who rivals Robin Hood with her bow and arrow? I like her already! 😀 There’s a lot of milestones associated with this project… this is going to be Pixar’s first fairy tale story, conceived by animation filmmaker Brenda Chapman who was originally going to be Pixar’s first director, but now she’s listed as co-director with Mark Andrews. Chapman envisioned the concept to be in the vein of Hans Christian Andersen’s fairy tales.

Here’s the premise per Wikipedia:

Brave is set in the mystical Scottish Highlands, where Mérida is the princess of a kingdom ruled by King Fergus and Queen Elinor. An unruly daughter and an accomplished archer, Mérida one day defies a sacred custom of the land and inadvertently brings turmoil to the kingdom. In an attempt to set things right, Mérida seeks out an eccentric old Wise Woman and is granted an ill-fated wish. Also figuring into Mérida’s quest — and serving as comic relief — are the kingdom’s three lords: the enormous Lord MacGuffin, the surly Lord Macintosh, and the disagreeable Lord Dingwall.

Back in March, EW.com has released some concept art from the project, such as the two below: 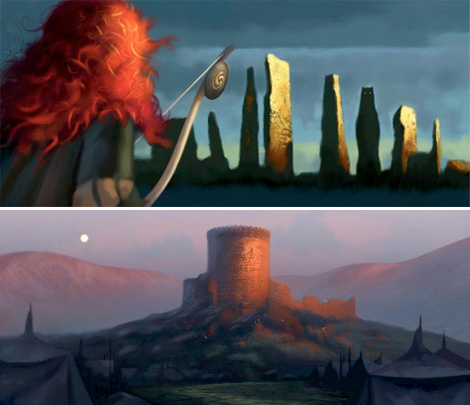 The voice cast is appropriately Scottish: Kelly Macdonald, Billy Connolly, Kevin McKidd, and Craig Ferguson. First reaction: Where is Sean Connery and Gerry Butler? 😀 Glasgow-born MacDonald replaced Reese Witherspoon due to scheduling conflict and I must say I’m glad she did. A Scottish princess ought to have an authentic Scottish accent! Oh, there is also a bit of a Harry Potter cast reunion as Emma Thompson, Julie Walters and Robbie Coltrane will also provide voices for the film.

I pretty much love anything from Pixar, I think the only one I haven’t seen is Cars, which interestingly enough is the lowest scoring Pixar feature on RottenTomatoes (which is still high at 74%). That is amazing that for the past 16 years, the studio manages to keep a stellar record of producing quality films embraced by critics and audience alike. I have a feeling I’d have to update my Top Five Pixar Characters list after watching this one.

BRAVE is set for release in Summer 2012 and the teaser trailer will be released along with Cars 2 next month. I really can’t wait for this!

What do you think, folks? Are you looking forward to this latest Pixar original feature?