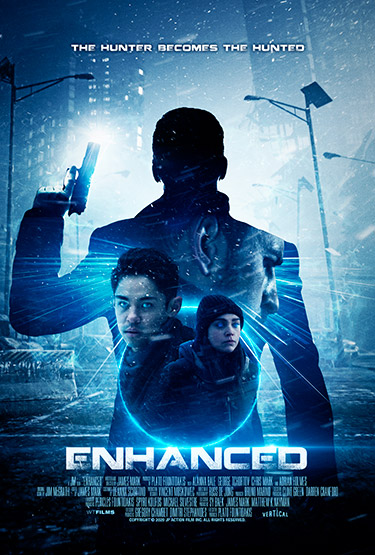 More than a year after the start of the COVID-19 pandemic, most film-loving moviegoers have turned to the multitude of premium video-on-demand (PVOD) offerings of various kinds. Even the large movie studios have turned to using their steaming platform, whether it’s HBO Max, Disney+, or Amazon Video. The others, such as Vertical Entertainment, have continued to roll out a diverse offering of PVOD titles, such as director James Mark’s film Enhanced. In his first feature film Kill Order, a martial arts action film​​ which was distributed by RLJE in 2016, James Mark worked with his younger brother Chris Mark to showcase his professional background in martial arts and gymnastics. Having a director who has made his career in film as a professional stuntman and fight choreographer is quite evident here.

The plot of the movie is relatively basic and has been remade several times over. It has all the elements; there is a sinister government organization, a group of “enhanced” mutants, and a main character — a soldier who becomes disenfranchised. George Tchortov stars as a soldier also named George, tasked with bringing in alive the aforementioned group of “enhanced” mutants. In another part of town, we meet a young woman named Anna (Alanna Bale), who is homeless and living out of a van in an abandoned yard and works as a car mechanic. She gets involved in a precarious situation at the car shop after which she is forced to go on the run.

Anna is eventually tracked down by George and a group of soldiers working for the government/military leader Captain Williams (Adrian Holmes). The Captain wants George and the other soldiers to capture Anna using their high tech watch/energy tracking devices and their blue-tipped, energy-zapping sticks. They also try to use a tranquilizer to subdue her before bringing her in to the facility where they’re keeping other “enhanced” mutants, but Anna does not oblige and uses her “enhanced” mutant power to escape. She does receive unexpected assistance from a mysterious “enhanced” mutant named David (Chris Mark), who hunts down and kills all (except one) of the other soldiers and takes George as a hostage. A scene of red blood on white snow ensues.

It becomes clear that David is stronger than any of the previously encountered “enhanced” mutants of “beta” or “gamma” strength, making him a “super enhanced” mutant, or an “alpha.” David claims vengeance against the government, and he gains power by eliminating his enhanced allies, getting stronger each time he kills others like him. He demands that George tell him where Captain Williams and the government is keeping the other “enhanced” mutants. Anna quickly learns of David’s actions and wants to help George and help him not get killed by David. Anna and George fight David in a well-choreographed martial arts sequence between the three actors, and eventually Anna and George escape on snow mobiles and get driven to another location by a mysterious ally named Eli (Michael Joseph Delaney).

Director and screenwriter James Mark also took on the responsibility of being the film’s stunt coordinator, working closely with his brother Chris Mark to pack as much action and martial arts in the fights sequences as possible. It was a visual feast watching Chris fight using his extensive knowledge of martial arts and being a stunt performer. His character reminded me of the way actor Robert Patrick played the T-1000 in Terminator 2: Judgment Day. While David is not meant to be a shapeshifting android assassin like the T-1000, David has the fighting ability and displays skills that make him almost unstoppable.

With James Mark having worked on big titles such as Pacific Rim and Scott Pilgrim VS the World, it is evident that his love for fighting sequences, visual effects and using the natural elements that are visually impactful to the movie and bring us outdoor natural light scenes in the snowy woods of Canada. Director of Photography Russ De Jong uses the Canadian wilderness and the uninhabited area around Toronto to his advantage. Whether it’s on a snowmobile ride through the woods or a several long landscape shots, I am reminded of the beautiful snow-covered woods in Minnesota during the winter.

While this movie doesn’t employ any new and different storytelling, it does make for a fun-filled movie night at home for those looking for the unusual combination of mutants, martial arts and mysterious strangers living in storage facilities while trying to escape a sinister government/military organization. I especially enjoyed Chris Mark and his ability to create an indestructible character. At times, I felt sorry for David, even though he was the antagonist in the film and is a killing machine. George Tchortov and Alanna Bale’s chemistry was quite strong on screen, most likely due to both actors having acted in various film and television roles such as Tchortov’s work in the film Honor Code and Bales’ role in the popular Hulu series Cardinal.

For those sci-fi junkies looking for a good action film that employs the director’s love for “…films {that} inspired us, resonated with us and left us wanting to join a dojo or play with a broom stick in the backyard,” they won’t leave the comfort of their couch disappointed. If this movie’s sole purpose is to motivate its audience to sign up for the dojo and learn how to kick butt with a broom stick, then go right ahead and sign me up!

Have you seen ENHANCED? Well, what did you think?