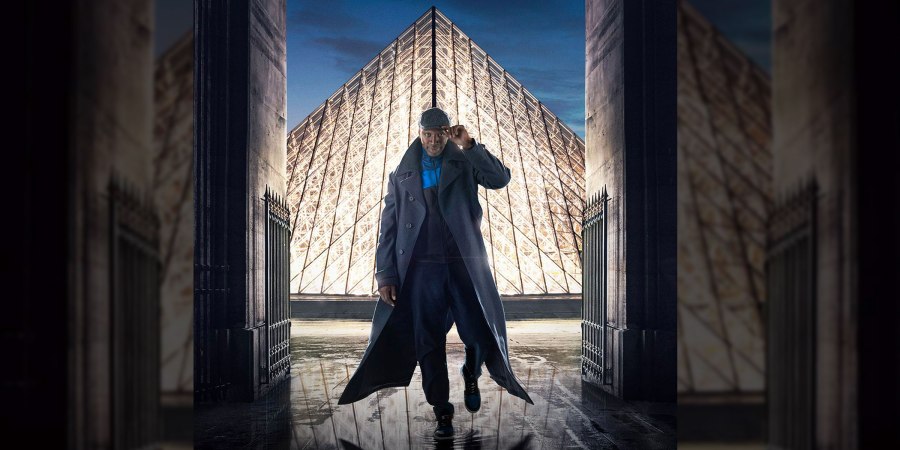 LUPIN was one of my most-anticipated series on Netflix which I’ve talked about briefly in this post. It’s a 10-part miniseries inspired master thief Arsène Lupin, created by French novelist Maurice Leblanc.

Here’s the trailer again if you haven’t seen it yet:

Now, so far only 5 episodes of the miniseries have been released. Per Wiki, the second set were already filmed by the end of 2020 and are slated to be released in mid-2021. So you have plenty of time to catch up before the final 5 eps arrives.

Here’s just 10 reasons why you should absolutely watch LUPIN: 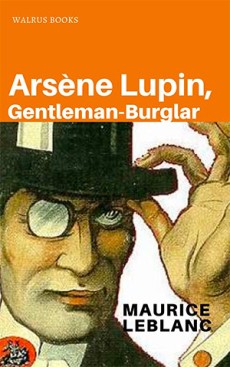 I used to read a bunch of Dutch & Belgian graphic novels like Danny & Katia (which I can’t seem to find anywhere here in the US), Adventures of Tintin, etc. I also read some thriller novels like Agatha Christie and Sidney Sheldon, but for some reason I’ve never heard of Arsène Lupin. Created in 1905 Maurice Leblanc – part Sherlock Holmes, part Robin Hood but decidedly French.

Like Robin Hood, Lupin is a force for good even though he operates on the wrong side of the law. His victims are usually big establishments or the extremely wealthy who are basically worse than him. Apparently Leblanc’s novels also inspired Leslie Charteris’s The Saint, aka Simon Templar who’s also a master of disguise.

I had only seen Omar Sy in Intouchables and I remember he has such a great screen presence. He plays another French-Immigrant from Senegal here as Assane Diop, a stylishly-dressed gent who uses his undeniable charm as well as masterful thievery + disguise skills. Though he’s not exactly an honest man, you just can’t help but be drawn to him and that charming smile.

The first time I saw the trailer I immediately thought he’s basically a French James Bond, and well, Sy himself confirmed the apt comparison.

“If I were British, I’d have said James Bond. In France, we have Lupin!” — @OmarSy, star of the new @netflix series Lupin, on finding his dream role.

Given how much I wish to see Idris Elba as Bond, watching the equally charismatic Omar playing Lupin is such a treat. I can even say Assane is even better than Bond as he is his own Q-department!

3. Intriguing plot that keep you guessing

The series creator George Kay is no stranger to British TV. He’s one of the creators of the various Criminal crime thriller series such as Criminal: UK, Criminal: France, etc. and he’s also been writing for The Tunnel and Killing Eve series.

I think it’s brilliant that Kay takes the source material as a base for the lead character, but then subvert and update it to make something suitable for the modern audience. Per his interview in Variety, “…Kay kept the sense of mischievous, adventurous crooks and criminals intersecting establishment, but  felt it was equally important to take everything we loved in the books, subvert it, update it and create a really modern story through the heart of it.”

I think that made the story fresh while still in keeping with the mystery and suspense of the novels. There’s a parallel story between Assane and the team of detectives, particularly Youssef Guedira (Soufiane Guerrab), that culminates in the fifth episode (last ep of part 1). All of that adds to the dynamic storyline that makes the show so much fun to watch.

I have to credit the show runner and the writers for interweaving Assane’s past in such a clever way. Sometimes flashbacks don’t work well and can slow the pace down, but here, the flashback is done quite seamlessly. It also helps that they cast the right actors for the role of young Assane (Mamadou Haidara) and his father Babakar (Fargass Assandé). It shows how Babakar used to work for Hubert Pellegrini, a powerful figure of the French elite who owns the Marie-Antoinette diamond necklace. It’s a relatable immigrant story that’s relevant in today’s world. 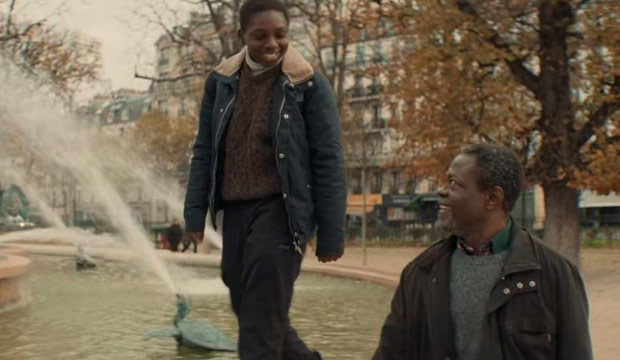 The tragic past that befallen Babakar is what drives Assane to do what he does now, and of course it’s also his father who first introduced the Lupin novels to him. It shows how the teenage Assane is obsessed with the gentleman thief novel, and 25 years later he uses everything he learns from it to avenge his father and expose Pellegrini.

French filmmaker Louis Leterrier (who directed The Transporter, The Incredible Hulk, etc.) is no stranger to action-packed movies. I love how LUPIN is packed with thrilling action with a large dose of humor right from the start. The elaborate heist scene during an action at the Louvre (shot at the actual famous museum) is reminiscent of something out of Mission Impossible movies, complete with impeccable timing and a crazy car chase AND a red Ferrari crashing through the museum’s iconic glass ceiling!

There’s a foot-chase through rooftops that are really fun to watch as well, but my favorite action scene has got to be this exhilarating chase involving a food delivery bike riders through a Parisian park! It’s just one of Assane’s genius scheme to fool the cops while he effortlessly escapes from their grasp.

Well, that brings me to the stunning scenery of the City of Light. I think we’re all dying to be able to travel again so all we can do is live vicariously through the characters we watch on screen. I’ve been on a French kick lately, following Call My Agent! (Dix Pour Cent) which is also set in Paris, and I just can’t get enough! 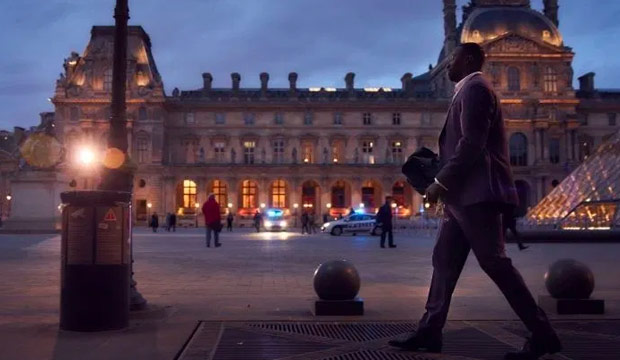 This Condé Nast Traveller article lists all the locations used for the series which I’ll definitely refer to next time I go to Paris again. I love the the café where Assane meets his wife Claire (Ludivine Sagnier) in episode 1, that’s L’Appartement Saint-Martin, with views of the 17th-century Porte Saint Martin. I also love the flea market where Assane’s bestie Benjamin (Antoine Gouy) owns an antique shop. It’s located in Marché Biron, north of Paris. Speaking of Benjamin, I really like the deep friendship between these two, which apparently has started since they were in school together. 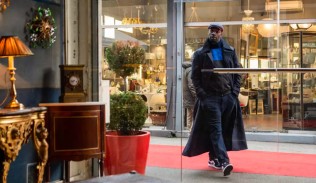 The fifth episode also takes us out of Paris to Normandy coast, a town called Le Havre. I actually did a bunch of research of that port city for my script Hearts Want (as my lead character actually took a ferry from Portsmouth, UK). Apparently there’s an annual festival dedicated to Arsène Lupin where everyone is dressed like the character with the top hat.

7. Formidable villain with ties to the hero’s past

If Robin Hood has The Sheriff of Nottingham, Assane Diop’s primary antagonist is Hubert Pellegrini (Herve Pierre), a wealthy, powerful member of the Parisian establishment. Just as power and corruption often go together, SPOILER ALERT (highlight to read) Pellegrini even has police inspector Dumont (Vincent Garanger) to do the dirty work for him in framing Assane’s father. 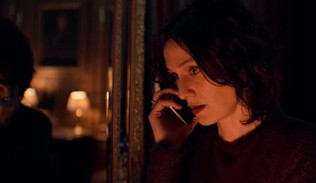 One thing for sure, the Pellegrini is a ruthless force to be reckoned with. Episode 4 is particularly suspenseful as Assane teams up with a journalist, Fabienne Bériot (Anne Benoît) whose reputation been tarnished by Pellegrini because she tried to expose him in her book.

I think just by having a black French actor as the lead reflects the reality of a more ethnically diverse country. It also gives the show an international appeal, so I’m not surprised that the show’s been well-received all over the world.

It’s great that the show-runner also fills the supporting roles with non-white actors. The actor who play police lieutenant Youssef Guedira (Soufiane Guerrab) was also in a Call My Agent episode. He’s the only one who believes there’s a connection between the Louvre suspect (that is Assane) with Arsène Lupin, yet his peers always brush him off.

Besides hiring a good number of actors of color, I also appreciate that the show also doesn’t always show the glamorous side of Parisians and all the chic luxury we often associate with the fashionable city. I mentioned about Fabienne Bériot above, well, the disgraced former journalist now lives in a rundown apartment with her dog. It wasn’t until Assane approached her that she finally feels alive once again. This is perhaps one of the most heart-wrenching episodes given what happens to Fabienne in the end. 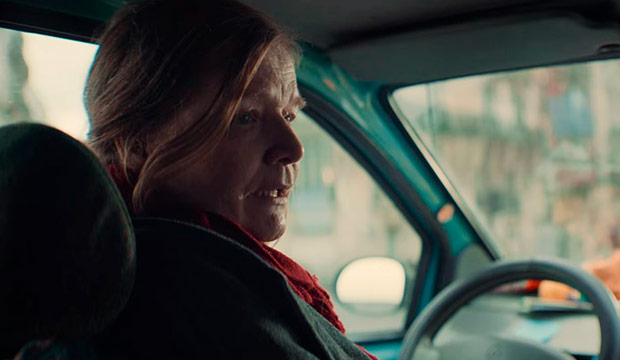 Assane is more than a gentleman burglar and master of disguise. Unlike Sherlock Holmes or Simon Templar, what sets Assane apart is that he is a family man. Right from the first episode, we see Assane meeting his ex-partner Claire (Ludivine Sagnier) and has a son together. Though they’re no longer together, they still have an amicable relationship and he still supports them. 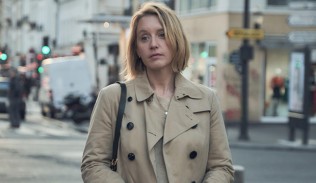 I love the relationship between them, there’s a certain playfulness and also realism in the way Raoul (Etan Simon) behaves as a teenager. Of course, given that Assane lost his own father at a young age, he really tries to be there for his son. The Lupin novel ends up being passed down through generations as there’s a lovely scene where Assane gives the book to Raoul. Now, obviously given the difference in life circumstances, the book might not mean as much to Raoul as it did to Assane in his youth.

Assane is also not a violent man and though he’s been hurt in the past, he doesn’t become a sullen nor vicious. The way he deals with Inspector Dumont is a great example and it’s refreshing not to see any of the brutality you see on SO many shows these days. I love how he fools the entire police department while teaching Dumont a lesson in the process.

The series’ great production values is fantastic – the cinematography, action set pieces, locations, etc. all makes for a fun escapism series. It’s definitely the most fun crime caper series on TV right now. So many crime shows are way too serious for its own good, but LUPIN has the right balance of humor, mystery, suspense, as well as emotional familial story that makes you care for the hero’s journey.

Oh, I have to say Assane Diop’s got to be one of the best-dressed hero on TV, not surprising given the Parisian setting. My husband and I always comment on all the cool outfits and footwear he wears every episode. Whether formal or casual, Assane looks like he’s straight out of a GQ photoshoot!

Now the worst part of LUPIN is there’s only 5 episodes!! I don’t know why Netflix isn’t releasing all 10 episodes as I believe they’re done filming them. The cliffhanger on episode 5 has me reeling as it finally ties Assane with Youssef who’s also a big fan of the Lupin novels.

SPOILER ALERT (highlight to read)
Of course the big question is whether Youssef would turn Assane in, but my gut says no, as technically Youssef is off the case thanks to Dumont who clearly hasn’t learned his lesson and is still working with Pellegrini, ugh!

Well, have you seen LUPIN? I’d love to hear what YOU think!