In a story depicted in oil painted animation, a young man comes to the last hometown of painter Vincent van Gogh to deliver the troubled artist’s final letter and ends up investigating his final days there.

Billed as the world’s first fully painted animation feature, naturally each scene is worth framing. It’s a gorgeous film that leaves my mouth agape as I kept wondering ‘how did they do THAT?’ Well, per IMDb trivia, each of the film’s 65,000 frames is an oil painting on canvas, using the same technique as Van Gogh himself, created by a team of 100 painters. It’s fitting then that title is Loving Vincent as his art was treated with such care.

Now, the story itself surprised me. I didn’t know much about Van Gogh but the ‘fact’ that he killed himself in his 30s was well-known. But did he actually commit suicide? The film traced the last days of Vincent’s life through the eyes of a young man (Douglas Booth), who happens to be the son of Vincent’s postman. The film’s filled with plenty of familiar faces (at least to me as I’m into British shows/films) portraying people in Vincent’s life (Saoirse Ronan, Helen McCrory, Eleanor Tomlinson and her Poldark‘s co-star Aidan Turner). 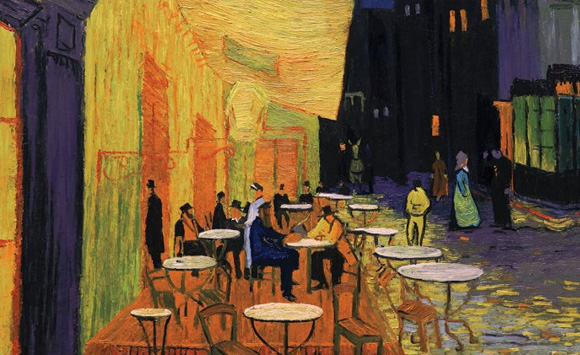 Written and directed by Dorota Kobiela and Hugh Welchman, it’s really quite an endeavor and astonishing to behold. It’s not the strongest film in terms of narrative however, but still it’s an incredible feat to accomplish. It’s quite something to want to tell an artist’s story through his painting, to actually do it–and done it well–is astounding. Well-deserved of its Golden Globe and BAFTA nominations, I was also rooting for it to win an Oscar in Best Animated Feature category. It’s definitely a must-see for art fans or really anyone up for something you’ve never seen before.

Loving Vincent left me in awe of Van Gogh‘s talents but also saddened by his troubled life. I think most artistic genius are tortured souls and he’s definitely one of them.

Have you seen Loving Vincent? I’d love to hear what you think!