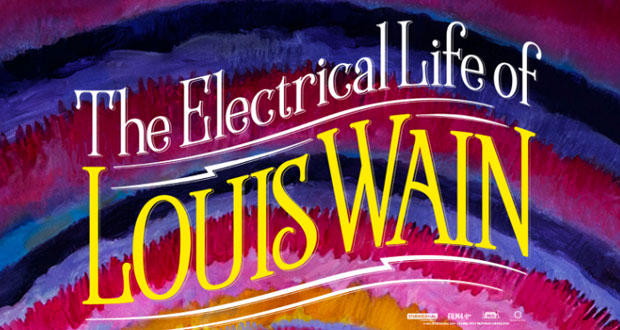 Benedict Cumberbatch has built his career on quirky roles, and he once again plays an eccentric genius. This time it’s an English artist Louis Wain whose surreal cat paintings, um, catapulted his career at the end of the 19th century. Now, I never thought there was a time when cats weren’t household pets, well apparently part of Wain’s legacy was change the image of cats as distrustful creatures into something cute and cuddly.

Louis’ life however, isn’t quite warm and fuzzy. As the first of six children and the only boy, Wain ends ups supporting all his sisters and his mother following his father’s death. So undoubtedly Wain has a peculiar upbringing and he seems to be willing to put up with a lot, especially the constant berating from the eldest of his five sisters Caroline (Andrea Riseborough). But his spirits perk up upon meeting Emily Richardson (Claire Foy), a governess his family hired for his younger sisters. The romance is frowned upon by the family, particularly Caroline, as Emily is 10 years his senior. But despite their objections, the two are quickly married and moved to Hampstead. It’s there that his love for cats blossomed after they adopted a stray kitten they named Peter.

There seems to be no shortage of amazingly-gifted artists with tragic lives, and Louis faces tragedy in both love and career despite reaching a certain degree of fame and notoriety. He didn’t get to live a long married life with the love of his life due to cancer, which made him even more prolific with his cat drawings during Emily’s illness. At one point she woke up to a room literally filled with cat paintings Louis had drawn. The relationship between Louis and Emily is quite sweet, and Foy has such a lovely presence on screen, so it’s too bad her screen time is pretty limited here.

In terms of career, one can’t help but see the similarities between Louis and Nikola Tesla, one of the most brilliant inventors with the brightest minds who somehow didn’t have the business smarts and faced poverty during his lifetime. Louis confessed to his sisters that he didn’t sign copyright of his work, which caused him to constantly face financial difficulties. For a while Louis was employed at Illustrated London News by its owner, Sir William Ingram (Toby Jones), who became a close friend, but he became sort of a freelance artist throughout his career. 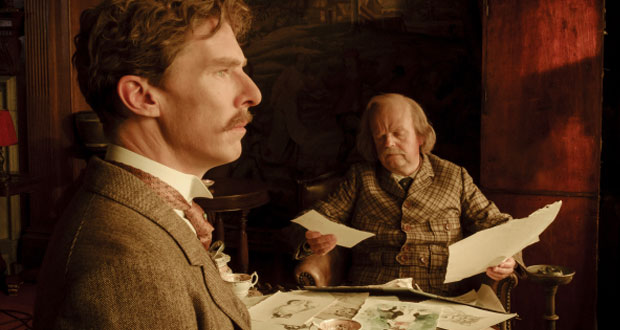 As a narrative feature, director Will Sharpe (show-runner of the Flowers UK series) is a curious one with a rather bizarre directorial choices that feels experimental and at times psychedelic and overly sentimental. It also uses a narration by Olivia Colman, which feels like a crutch to help us understand what’s going on at certain points of Louis’ life. As the title suggest, there’s also Louis’ pre-occupation with electricity, which I find quite amusing given Cumberbatch played Thomas Edison in The Current War in 2017. Some of his electric-cat drawings reflects this period, shifting from the more anthropomorphic style where the cats are drawn behaving like humans.

The depiction of schizophrenia that plagued Wain’s family is at times too manic or too whimsical. Starting with one of his sisters who ended up in a mental hospital, Louis too, suffered from that chronic brain disorder, depicted vividly in the film where he imagines himself drowning and screaming for help from his father. Perhaps the frenzied style is meant to showcase Louis’ mental state, which also tends to succumb to sorrowful mood. Speaking of drowning, I feel like the film often drowns in sadness. The moment Louis lost Peter, the cat he and Emily adopted, Louis is absolutely crestfallen that he sobs for a long period of time as he’s lying on the floor. Then in his later years when Louis is in his 70s living in a mental institution, the gray-haired, weary-faced artist is visited by an old friend whom he first met on a train decades prior. He laments about the harsh life in the psychiatric hospital and how he misses his cats. 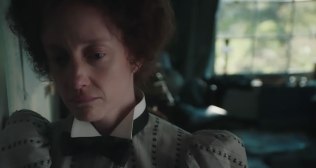 The performances are as uneven as the film itself. The usually terrific Andrea Riseborough delivers a strange one-note performance that’s almost grating as she’s screaming all the time, usually directed at poor Louis. Claire Foy has a nice chemistry with Cumberbatch and she has kind of a wide-eyed curiosity as his love interest. I enjoy seeing character actor Adeel Akhtar in a prominent role as Mr. Rider, one of Wain’s biggest allies who helps him secure a more pleasant place to call home, complete with a garden and plenty of cats. As for the two famous cameos, well Taika Waititi’s appearance is largely unmemorable, while Nick Cave’s H.G. Wells is also a blink-and-you-missed it moment.

As for Cumberbatch, though he’s played too many similar characters in his career, he’s still quite good in the role. In fact, he’s competent enough to rise above the uneven direction and still makes a compelling portrait of a true artist that you can’t help root for. I’m glad I got to know a bit about Louis Wain and his work/legacy. The biopic isn’t quite um, electric as it wishes to be, but there’s enough going for this to warrant a recommendation.

What did YOU think of The Electrical Life of Louise Wain?