The Twi-hards rejoice once again with the release of the last movie of the behemoth Twilight franchise (wahoo!! free at last!) Their purchasing power truly cannot be denied! $141 mil this weekend alone domestically, topping the first part of Breaking Dawn‘s $138 mil. I did see the first part as my Twi-hard colleague lent me her dvd, I probably wait until she does the same thing again next year, simply for the unintentionally hilarious moments now that Bella joins her man as a vampire herself.

I skipped the cinema this weekend as I just wasn’t that interested in Lincoln and I sort of lost interest in Anna Karenina. I think I’ll just rent that instead. I doubt Keira with all her pouting could convey the depth of Tolstoy’s beloved character as he envisioned her in the book.

So my hubby and I opted for a couple of indies from Netflix Instant instead and we really enjoyed both of them. Here are my mini reviews: 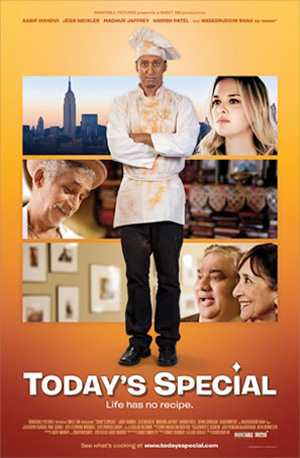 A young Manhattan chef Samir rediscovers his heritage and his passion for life through the enchanting art of cooking Indian food.

This 2009 foodie comedy is loosely inspired by the lead actor Aasif Mandvi‘s off-Broadway play, Sakina’s Restaurant. You might remember the Indian-American actor as a correspondent on The Daily Show with Jon Stewart and also as Mr. Aziz of “Joe’s Pizza” in Spider-Man 2. He’s also done supporting parts in films like The Proposal, The Last Airbender and Margin Call.

Nice to see him in a leading role here and I immediately sympathized with his character Samir, a sous chef in a posh Manhattan restaurant who dreams of making it big. But when he’s passed over for another promotion, Samir promptly quits and plans to move to France, but fate has a different plan for him and he ends up taking care of his dad’s rundown Indian restaurant.

On top of that, Samir has to deal with family issues, the typical overbearing mother who wants to find him a Muslim wife, and a disillusioned father who constantly berates him that he’s not as good as his deceased brother. Samir’s personal journey is peppered with humor, heart-warming moments, and chock-full of hilariously eccentric characters. I love that even the minor characters — such as this one kitchen worker who could only say yes and no — are quite memorable.

The scene-stealer here is Bollywood actor Naseeruddin Shah as the free-spirited taxi driver Akbar whose chance meeting with Samir one night could be the best thing that ever happened to him. I don’t ever remember Mr. Shah in anything else before which is a shame as he’s quite a charismatic actor and his character is just so darn charming!

Just like any movies about food, the scenery is really mouth-watering. I tell you, it made me crave Indian food watching Akbar mentor Samir on the art of cooking Indian cuisine. Akbar is a passionate chef who cooks from the heart, which goes with the tagline of the film, ‘Life Has No Recipe.’ The relationship between these two are the best part of the film, as the romance between Samir and his former colleague (Jess Weixler) isn’t explored all that well.

Overall it’s an enjoyable ‘cultural comedy’ if you will, but anyone should be able to relate to its universal theme of family, friendship and the message of making the most of one’s ‘broken dream.’ I highly recommend this if you’re in the mood for an enjoyable off-the-beaten-path comedy.

After a powerful billionaire is murdered, his secret adoptive son must race to prove his legitimacy, find his father’s killers and stop them from taking over his financial empire.

I remember seeing the trailer for this movie a while back but didn’t remember the title. Apparently this film is based on a graphic novel by a Belgian comic artist Philippe Francq, who incidentally is a big fan of the Tintin comics I grew up with. What I love about this film is its international flavor, which reminds me of Bond movies in the way it was shot in many exotic locations.

The protagonist is Largo Winch, played by French actor of Israeli-descent Tomer Sisley, a reluctant heir to a billionaire magnate, Nerio Winch. Largo gets entangled in a corporate conspiracy theory following the death of his adopted father. He has to prove his legitimacy to the shareholder of his late father’s company, the W Group, and also find out who kills him.

The film has some flashback scenes on Largo’s adoption and upbringing, both when he was living with a Croatian family designated by Nerio himself, and how Largo’s father has always prepared him to be his chosen heir. This personal journey of Largo keeps the story grounded, even if the twists start to pile up and the action gets more and more bombastic. Director Jérôme Salle likely borrows the style from Bond and Bourne movies, there are all kinds of chase scenes to be found here. Motorbike chase, car chase, foot chase, you name it, there’s even a scene of the hero falling into the ocean that’s highly reminiscent of Bourne Supremacy.

But despite its lack of originality, I think this is a pretty enjoyable and slick action adventure that should please action fans. There’s enough suspense and beautiful cinematography of exotic locales to keep up entertained as well. There’s one breathtaking scene where Largo rides a boat to a round island that’s supposedly near Malta (see below), but it was filmed in Castellammare del Golfo in Sicily, Italy. The scenery rivals that of a Bond film which is quite impressive given it’s only got a $30 mil budget.

I think Sisley is a pretty appealing leading man, even if he’s not exactly the most-skilled actor. He’s got a devil-may-care attitude to him, but he’s also got a warm side to him, especially during the scenes with his adopted mother Hannah. Apart from Kristin Scott Thomas, who’s excellent as always, most of the supporting cast is unknown. I think I’ve only seen Mélanie Thierry in the The Princess of Montpensier trailer and she’s got quite a steamy scene with Sisley. They use various languages here as well which enhances a level of authenticity and the music by multiple Oscar-nominee Alexandre Desplat is worth noting as well.

I like this one enough that I might actually check out the sequel, The Burma Conspiracy, which has the same director as this one.

So that’s my weekend roundup, folks. What did YOU watch this weekend?