Desperate singles get all tangled up when a compulsive internet dater loses track of her accounts.

1. Tell us about your filmmaking background, how you got started in the business.

I started making independent shorts and web series when I lived in Nashville, TN, which is also where I met my directing partner, Natalie Irby. The first project we worked on together was an experimental short that I wrote and she starred in. We had so much fun working together on that project that we decided to collaborate again after I moved to L.A. in (late 2011). Hot and Bothered was our first project as co-directors and we’re already plotting the next (several).

2. How does the concept for your short film come about? Have you been interested in doing a comedy?

The concept for “Hot and Bothered” came out of a conversation that Natalie and I had with my wife, Sarah, at a Mexican restaurant in Los Angeles. We were talking about people we knew who were accomplished, attractive, and desperate. It seemed like we all knew a lot of people who seemed unnecessarily frantic, people prone to needless self-sabotage – especially those who were also single and overwhelmed by the online dating scene. I went home from that dinner and started writing. 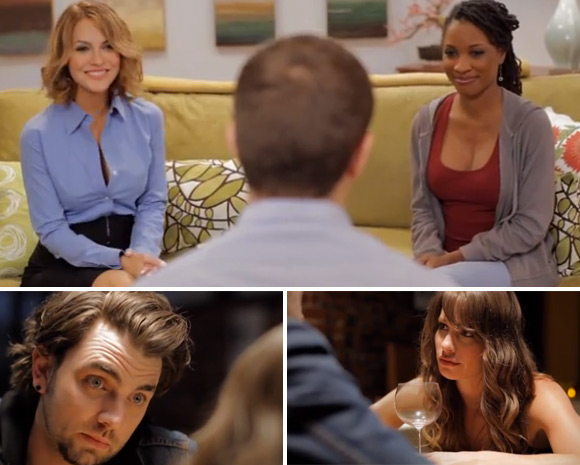 3. I thought the casting was great, everyone fit the roles perfectly. Please tell us a bit about the casting process.

This project really took off after our Casting Director, Scott David, signed on. Scott casts the show “Criminal Minds” and has tremendous access to talent. Our cast was amazing and professional and each one of them brought unique depth and mischief to their characters.

4. How was working w/ your co-director Natalie Irby? Did you both come up w/ the film concept?

Natalie is a visual artist and I like to crack dumb jokes so we had a pretty great division of labor. She took “Hot” and I handled “Bothered”.

5. Are you planning on working on a feature film in the future? If so, do you have an idea in mind?

We are absolutely talking about making a feature at some point in the next two years. It’s just a matter of finding the right story and characters.
…

A new treatment for her comatose husband compels Diane to reexamine their relationship.

1. Tell us about your filmmaking background, have you worked on other films (shorts/features) before this one?

I graduated this spring from Minnesota State University Moorhead with a Bachelors in Film Studies. MSUM is the only University in Minnesota that offers a four-year program in both film production and film history & criticism, and I had a terrific time there. I’ve been making short films and whatnot since High School, and I wrote, directed, edited and/or produced almost a dozen films at MSUM. My films have been accepted to 11 different film festivals, most of them in the Midwest. The Librarian’s Assistant, which I wrote, shot, edited & directed, won Best Acting at the 2010 Quiet on the Set short film competition in Minneapolis and Best Family Film at the 2010 South Dakota Film Festival; A Better Life won Best in Show and Best Screenplay at the Spring 2013 Juried Film Exhibition at MSUM.

2. How does the concept for your short film come about? Were you intent on doing a sci-fi story?

I’ve been a really big fan of science-fiction films since I took a class on them at MSUM, which is also where I wrote the first drafts of the script. A class assignment was to write a short science-fiction screenplay, and I wanted to tell a minimalist, character-driven sci-fi story, in the vein of such great films as Primer and Moon. The idea came from seeing multiple films and TV shows featuring patients in comas, and dealing with the constant supervision and financial difficulties in caring for them. I thought, what if in a few years, we developed a new technology that could let families care for their comatose loved one by controlling them via a remote control, using it to keep them active, feed them, etc? How would this technology impact people and their relationships with their loved ones, and how could it be abused? The idea seemed perfect for my desired story scope and ripe with interesting subtext, so I set about writing it with my classmate Ben Grell. We wrote several drafts over the course of the class, but afterwards I kept re-writing it and re-writing it. Eventually, after suggestions from friends, I reworked the film with a non-linear structure, inspired by non-linear films like Memento. This new structure helped tighten the script and increase the visual storytelling, and after a few more drafts – 15 or so in total – the script was ready to shoot.

Check out some behind-the-scenes photos of A Better Life: 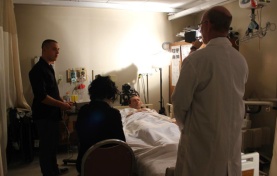 3. Tell us a bit about the budget and how you came up with the resources to make this film. I remember you talked about how you came up w/ the clear iPod looking device the wife used to control her husband’s movement, so feel free to elaborate on that as well.

As a student filmmaker, I’m very used to making a film with little-to-no money, paying the actors and crew with food and using whatever props and locations we can get for free. We followed that formula on A Better Life as well, but we also had some help. Every year, the Minnesota Film & TV Board graciously awards a $1500 grant to one student at MSUM. To apply, I had to submit a finished script, a budget, and a rough crew & location list. I was very honored to win the grant that year, and that money allowed us to rent specialty equipment for the shoot, buy better food for the cast & crew, purchase props & costumes, and pay for submission fees to film festivals. The film could not have been made without the involvement and hard work of a truly wonderful cast and crew, and a number of terrific people willing to let us film in their homes and places of work.

4. What was your biggest challenges in making this film and how you figure out a way to overcome them?

One of the biggest challenges on this film was the remote control. This is the key prop for the film, and the most obvious element of science-fiction in the story. My very talented Production Designer Mallery Mohn and I discussed the design, how I wanted a sleek, modern feel to it, and she created a wonderful prop out of a plastic picture frame. The digital interface of remote came in post-production, thanks to the fantastic Special Effects wiz Ben Stommes. Ben was able to design a logical, functional interface that matched the finger movements of the lead character, and fit it to every needed shot in the film. In filmmaking, the key to success is surrounding yourself with talented people. If I did one thing right on this film, it was hiring enormously talented people like Mohn, Stommes, Cinematographer Shane MacKinnon, Editor Chance Cole, Producer Patrick McKeown and Composer Greg Albing to help bring this film to life and make the filmmaking process so much easier.

5. Who are your biggest filmmakers and/or films influence? In other words, where do you draw your inspiration from?

For this film, I drew on other small-scale science fiction films like Moon, about an isolated miner on the Moon who uncovers a dark secret on his base, and Primer, about two computer geeks who build a time machine in their garage. I studied how they were able to find drama and philosophical depth in character’s dealing with dangerous technology and ethical dilemmas, without the need for space battles or alien monsters. As a filmmaker, I have several directors that I adore, as well as shamelessly copy in my own directing style.

I love Christopher Nolan’s deft hand at weaving complicated stories, such as Memento and The Prestige, and his fascinating explorations of deep, philosophical ideas. Quentin Tarantino’s hilarious, insightful scripts are a constant joy, and his visual flair is wonderful to behold. And Hayao Miyazaki, the master Japanese anime director, is truly inspirational, a genius at telling quiet, powerfully intimate stories as well as sweeping, emotional epics. These filmmakers, and many more, inspire me as a filmmaker and compel me to strive for honest, emotional storytelling and visual distinction and impact.

Check out A Better Life on facebook for more info and view the trailer on Vimeo.

THANKS SO MUCH Jake and Conor for the interview!

Hope you enjoyed the interviews. I wish both Jake and Conor all the best in their future filmmaking endeavor!