The first Fast and Furious film came out 18 years ago and no one would have predicted that it would became one of the most successful franchises in Hollywood. Heck, when I saw the third sequel The Fast and The Furious: Tokyo Drift, the worst in the series, I thought for sure we won’t be seeing anymore Fast and Furious films. Boy was I wrong, the later sequels somehow became more financially successful than the previous ones.

The eighth film in the series begins with Dom (Vin Diesel) and his now wife Letty (Michelle Rodriguez) honeymooning in Cuba. While there Dom ran into a mysterious woman who turns out to be a super cyber terrorist named Cipher (Charlize Theron). Cipher wants Dom to help her steal some super powerful weapons from the US, Russian and German government so she can start World War 3. Of course Dom being Dom, he refused but Cipher is holding someone closes to him hostage and if he won’t do as she says, that person will be killed. That’s pretty much the basic storyline for this entry, Dom has to betray his team/family and throughout the film, there are tons of car chases, explosions, shoot outs and of course good looking people running around in skimpy clothes.

The script by franchise’s regular Chris Morgan is pretty simple, he knows his audience and fans of the series won’t be disappointed. I do have some issues with the script, I won’t spoil it here but he tried to wrap everything up from the last two films that kind of made the previous pictures irrelevant. Apparently, they’re planning to make two more films after this one. Stepping into the director’s chair this time is F. Gary Gray. I’ve enjoyed some of his previous work and it’s obvious he was chosen because he’d worked with most of the actors in this film in the past. With a reported budget of $250mil, Gray staged some pretty crazy action sequences, including a pretty fun big car chase through the streets of NYC. But compare to the previous films, especially the ones directed by Justin Lin, his action sequences lacked energy and kind of boring. A climatic chase that involves a submarine could’ve been a lot of fun but he decided to inter cut it with some silly flashback sequence that explained a “twist” that most viewers could’ve seen miles away. I think he and his editor should’ve done a better job with what I assume was the most expensive sequence to shoot for the film. 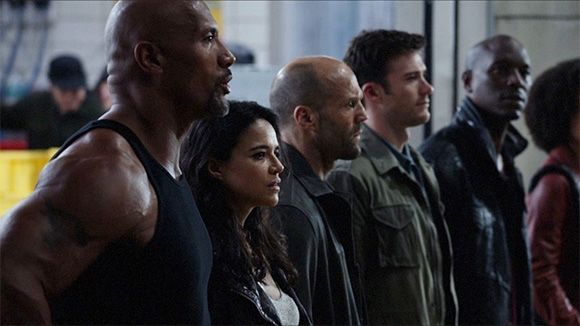 As for performances, Diesel is again took his role way too seriously and he even shed tears in one scene! I think he needs to simmer down with his performance in the next one and have a good time. On the other hand, Dwayne ‘The Rock’ Johnson and Jason Statham knows the kind of film they’re in and having a great time with it. Their bantering gets the most laughs and of course they look good kicking butts. I don’t remember when The Rock’s character Hobbs became superhuman but he’s somehow fights like Superman in this film. Theron is moving to more action related films in this phase of her career and she’s great as the Bondish supervillain. Heck I think the Bond producers should cast her as the main villain in the next Bond film. The rest of cast were fine as usual and they even introduced a new pretty boy to replace Paul Walker. Clint Eastwood’s son Scott is now the new team member and I’m sure we’ll see more of him in the future films. Also returning is Kurt Russell as a super secret government agent who provides Hobbs and his team with everything they need to stop WW3 from happening. Last but certainly not least is Helen Mirren who seemed to have a great time in her small a cameo role.

I have some issues with the script, mostly of the “twist” towards the end but otherwise, I had a fun time with this latest sequel. Fans of the series should be pleased with it since it delivered what they wanted to see. Big car chases, shoot outs and of course explosions. So if you’re planning to see it, go to the biggest screen you can find and hopefully it’s equipped with Dolby Atmos.

Have you seen The Fate of the Furious? Well, what did you think?