Merry Christmas, all and sundry!

Taking a brief respite from the strategy of “What?”s and “When?”s in regards to baking family Christmas gifts. I’ve fallen back upon a request from our Hostess regarding favorite holiday-hemed films. While A Christmas Story and It’s A Wonderful Life hold their proper place high in the firmament. And have been critiqued to death. I’ve opted for a later film directed by Delbert Mann.

Whose sublime detail in its many sets firmly ensconce this work in the still glamorous world of 1960s Old Family wealth. And the continuous, often humorous sub rosa and covert scams and grifts employed to maintain it. All under the subtle of of the unassuming family butler.

Imagine if you will a cabal of Old School and generational full liveried staff and servants attached to Old Family Money all along the East Coast. Loyal to a fault and quite content their positions, lifestyles and standing. Yet, also often willing to bend the rules of social propriety (The Law) to maintain that standing. And the rather relaxed and elegant lifestyles of their respective “families”.

Put that concept in the more than competent hands of director, Mann. Allow him access to a stellar cast of then up and coming character actor and television talent. Back that up with an exceptionally harpsichord and brass heavy orchestra under the touch of an equally up and coming Johnny (John) Wiliams’ Ladle on opulent oaken and maple home estate and high end department store sets. To reinforce the carefree confidence of more the than financial stability of a half century ago.

Then put it all in the hands of Claude Fitzwilliam. (Dick Van Dyke. Rarely better!) A generational manservant and honors graduate of Williams College and completely devoted to the welfare and care of Miss Victoria Woodworth (A very spry and sharp, Edith Evans). Who enjoys the life of elegant luxury. While indulging in esoteric hobbies. Like a dictionary of phonetically misspelled words. Or dabbling in her and her family’s rather racy memoirs. Completely oblivious to (Or is she?) the goings on of her staff of footman, Albert (John McGiver). A bevy of maids and attendants. Chauffeur, Oliver (A very young Sam Waterson) and Fitzwilly. As Oliver guides a rather posh Rolls Royce Silver Cloud into Manhattan. On a walking and rather slick plundering tour of Bergdorf’s, Neiman’s and other high end establishments. 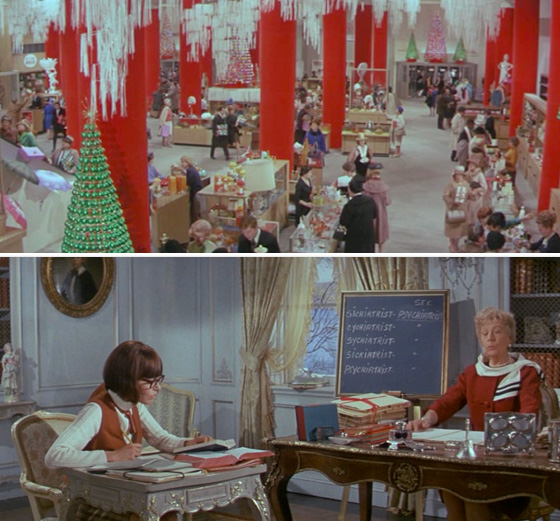 Checking off items on Fitzwilly’s shopping list: Silver cutlery, forks, spoons, sugar tongs on one level of Altman’s. Antique mirrors and leaded crystal one floor up. Television consoles on the ground floor. Vintage wine at another location. With Fitzwilly affecting a different voice, accent, infliction and body language for each purchase. Billing each to a fictitious family. Then calling the Shipping Department for a cohort (Noam Pitlick) to send on their way to St. Dismas Charitable Fund and its many thrift shops.

While Miss Vickie is otherwise occupied and in need of an assistant. In the shape of initially bookish, smart and bespectacled, Juliet Nowell (Barbara Feldon in her first and best film role!). Graduate of Business and Literature from Smith college. Expanding her repertoire with Post graduate work at Columbia and wanting to branch out on her own.

Fitzwilly and Ms. Nowell do not hit it off right away. As her evening arrival and interview had been arranged by Ms. Vickie and against his wishes. Creating an possible unwanted intrusion into the butler, staff and other familiar monied families’ staff operating under Fitzwilly’s umbrella. A solution is sought. And found in the holiday remodeling of a Palm Beach manse. Whose $15,000 budget (What roughly a half million would be today! Remember, this is 1967.) is placed into the hands of Byron Casey (Stephen Strimpell). Who wishes to spend as little as possible. And pocket the rest. A quick meeting with Fitzwilly and staff reveals all sorts of possibilities in keeping hold of Casey’s proposed half of the total budget. While procuring a Steinway Grand Piano, Crystal, Silver, Entertainment systems and other accoutrements of the idle rich.

Plans are discussed and set. Along with contingencies to keep Miss Vickie occupied along with Ms. Nowell. Who, besides being terribly efficient. Is also blessed or cursed with the curiosity of a cat. And finds Fitwilly’s and staff’s basement “work shop”. Full of paper stocks, printing presses, inks, pens, labeling machines, letterheads, mimeograph machines. All of the recently used tools of the illegal arts had been used to begin shipping items from north to south. 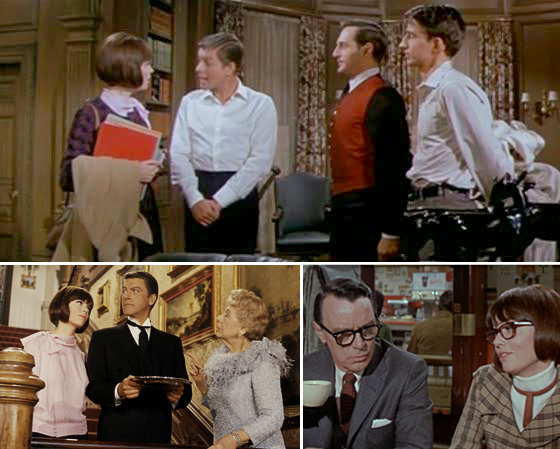 A confrontation is to be had as Ms. Nowell kind of misreads what she’s seen. And kind of doesn’t. After quickly executed biblical bar grifts (Sampsom and Delilah) are executed across upper and mid town establishments to cover unexpected shipping costs. Made worse by Ms. Nowell accidentally mailing out Casey’s $7,500 “retainer” check to a charity Fitzwilly has no control over. And can not intercept or stop its payment.

Others would see this as a irredeemable catastrophe, but not Fitzwilly. Who enjoys a challenge and come up with “one last caper” to cover the loss. And perhaps, turn a profit. With Altman’s being an optimum target. Along with a few other reputable firms.

All these plans, schemes, times and places of execution are known by far too repentant Albert (John McGiver). Who is snatched up in the middle of the Christmas Eve rush. And is more than willing to bare his soul as Miss Vickie politely crashes the interrogation between Albert, store manager, Oberlatz (Norman Fell) and Assistant District Attorney Eliot Adams (Dennis Cooney). Who want to nail Albert and company’s hide to the closest wall. As Miss Vickie; who knows Eliot and his family. Begins very polite, yet scandalous negotiations which focus on poster boy, Adam’s less than stellar past in boarding, prep schools and colleges. Watching and listening to the grand old dame effortlessly knocks back proposed felony charges to misdemeanors is a singularly memorable thing of insinuating and groveling beauty.

Clearing the decks for a Happy Ending. Whose details I’ll avoid while avoiding Spoiler Territory.

Now. What Makes This Film A Notable Favorite?

One of the last, most meticulously detailed and executed examples of being rich in the 1960s. And how the rich behave, though little of that has changed over the decades. Used to a certain level of comfort and discretion few may attain. And never apologizing for it.

Part of the film’s humor is in seeing how dropping the right name. Or having the right looking work orders. The right clothes. Behaving in certain cultured, mannered effete ways. Opens doors that most tho

rough background could never accomplish. Especially when Fitzwilly and his crew in brand name logo coveralls allows them to wrap up and walk out with a full blown African Safari floor display from a top line department store for Miss Vickie’s “Platypuses”. Her version of a rich kids’ Boy Scouts.

This film also possesses one of the best and most helpful soundtracks I’ve enjoyed in a while. Gently enhancing the austerity of Miss Vickie’s posh estate one moment. Then lightheartedly advancing suspense the next. Kudos to young Mr. Williams for so cleverly making an early mark before being “the go to guy” with the creation of later blockbusters.

Cinematography by Joseph F. Biroc is lush and opulent. Everything one could ask for. Indoors and out. Sets have already gotten their due. Costume design and execution by Donfeld are flawless. From Mr. Van Dyke. To Ms. Evans and Ms. Feldon’s early penchant for knit scarves and turtlenecks on down.

This is a film for Mr. Van Dyke to carry, if not take the lead on. Setting well inside the template started with Bye Bye, Birdie and Mary Poppins. Having fun with playing different characters, no matter how briefly. While Ms. Evans delicately manages to steal every scene she is in.

The chemistry between Mr. Van Dyke’s Fitzwilly and Ms. Feldon’s Juliet is fun to watch from the start. Equals in more way than one. Matching talents and wiles in a film that features the buyers’ insanity of the last minute Christmas season. Though is not centrally themed around it.

Note: This film has finally been getting some proper air time on Turner Classic Movies and is available to be viewed Full Length on YouTube.

…
Have you seen Fitzwilly? We’d love to hear what you think!