I’m all for swords & sandals flicks, so naturally I’m intrigued by this Roman empire feature Centurion when I first read about it in Empire a couple of months ago. The fact that it stars one of my top ten actors to watch Michael Fassbender doesn’t hurt, either. I first noticed the rising German/Irish star as Stelios in 300, which was then followed by acclaimed indie projects Hunger and Fish Tank, and more prominently Inglourious Basterds. In this movie, he’s starring alongside another 300 alum Dominic West, both seem to have better success retaining their buff physiques than King Leonidas himself (but I still love you Gerry Butler!) 😉

Anyway, the trailer arrives last week, check it out below:

Synopsis: Based on the legend of the Ninth Legion, an army of 3000 unstoppable Roman warriors who vanished without trace, Centurion is the tale of their vicious conflict with a murderous adversary, the Picts. Quintus Dias (Fassbender), a Roman corporal, is taken hostage by the Pict King, Gorlacon and the Ninth are charged with bringing him home and ending Pict domination of Britain. Led by General Virilus (Dominic West) and guided by a Pict prisoner and warrior woman named Etain (Olga Kurylenko), the army marches towards enemy territory and finds itself in the midst of a perilous battle with a mysterious foe. 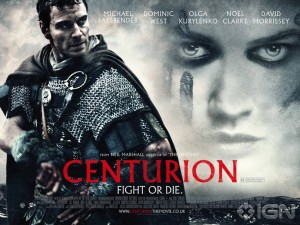 Most blogs featuring this trailer raved about it, but my initial reaction is meh, it’s like a poor man’s Gladiator. I mean I’m not dissing it for it’s low-budget as a movie obviously doesn’t have to be expensive to be good. I just feel like I’ve seen it all before, and again the Romans are depicted as the good guys here. The beginning reminds me of the opening scene of the Ridley Scott epic when the Maximus-led Romans attacked Germania, it’s probably was filmed in the exact same forest! The intensely brutal fight sequences are to pretty typical in this genre, though given the director Neil Marshall is known for bloodthirsty/gory flicks like Doomsday and The Descent (neither of seems like something I’d enjoy watching), the level of savagery level might be off the charts.

The cliché-laden catchphrases are kind of ho-hum, “We live united or die divided!” and “I’m a soldier of Rome! I will not yield!” They just don’t carry the same gravitas as “At my signal, unleash hell!” or “What we do in life echoes in eternity.” Then there’s every male’s favorite tough-chick Olga Kurylenko, who didn’t impress me much in Quantum of Solace (and even less so in the dreadful Hitman). She seems nothing more than eye candy for the dudes and from the reaction of the male bloggers out there, that’s probably all she needs to be.

Fassbender looks like he fits the part well, but it’s hardly a far-reaching role for him. I’m more interested to see him as Rochester in the latest Jane Eyre adaptation, which has lined up a pretty impressive cast, apparently Judi Dench, Jamie Bell (Billy Elliot) and Sally Hawkins (Happy Go Lucky) have just been added.

Anyway, no US release date is set for Centurion, but the UK release is April 23, 2010. What do you think, folks? Yay or nay for you? It’s definitely a rental for me just on account of Fassbender.