I was quite intrigued by Spanish actress Verónica Echegui who’s beautiful and spunky, she makes me like her character Maria right away. Maria’s personality is a stark contrast to the rigid and priggish Henry (Sam Claflin) who’s clearly proud of his humdrum novel The Sensible Heart despite the fact that nobody else does. Not even his publisher Jen (underutilized Lucy Punch) who has no qualms that her client’s been booked on a Mexican book tour under false pretenses. 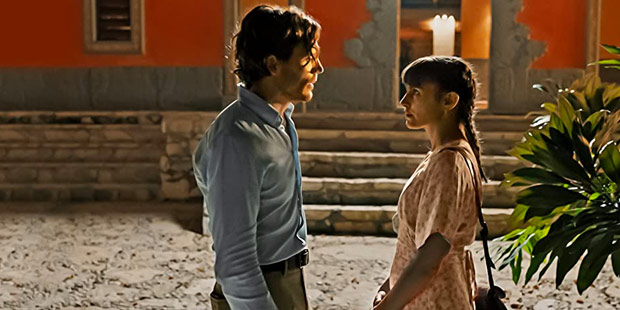 I think Claflin is handsome and talented, he has done remarkable work in other films of various genres. Yet for some reason the filmmakers compel him to channel 90s Hugh Grant here, complete with his nervous, bumbling mannerism and floppy hair. The supporting cast is filled with cliched stock characters, some are amusing (Maria’s gay publisher is quite a hoot), some quite pointless (Maria’s grandpa) and some are just downright annoying (Maria’s fickle ex).

There are touches on important topics such as rising up against sexism in the Mexican publishing industry and pursuing one’s passion, but it all gets a bit lost amidst all the schmaltz. The ending is so utterly hokey that it takes away all the good moments of the first act. It’s too bad as the leads are pretty good despite the lack of chemistry between them.

Under more capable hands, I think this premise could’ve been a classic. When it comes to rom-coms, I think something more familiar is to be expected, so long as it genuinely tugs your heartstrings. This one lacks emotional resonance and the hilarity wears off far too soon before the inevitable, predictable conclusion.

Have you seen Book Of Love? What did you think?