Because of the pandemic, Paramount Pictures has pulled some of their big films from theatrical releases. Two were sold to Amazon, Without Remorse and a new sci-fi action/adventure called THE TOMORROW WAR. It’s understandable why they’ve decided to do that, these were already expensive films to produced and selling them to a big company, they can make a little profit. Had they decided to release these films in theaters, they would have to spend more money on promoting them and none of these films are guaranteed box office hits.

As we both saw the movie over the weekend, I thought I’d post a double review of the movie:

In 2022, an ex-military man named Dan (Chris Pratt) is living a mundane life as a science middle school teacher. He has wife named Emmy (Betty Gilpin) and daughter Muri (Ryan Kiera Armstrong). Keeping a distance from his estranged father named James (JK Simmons). Dan is not happy with his current life since he believes he’s meant to do something special and not just a regular dad living a normal life in the burbs. One day, soldiers from the year 2051 arrive and warned that world is about end because in the future, aliens creatures known as White Spikes are killing everyone on earth at a high-speed rate. With only about half a million-population left in the future, the soldiers are asking people in the present day to travel to the future and fight the aliens.

Soon governments from all over the world implemented a draft where everyday people would get drafted and sent to the future to fight the nasty creatures. When Dan was selected to go, his wife begged him to find his father so he can help them escape from the government. But things didn’t turn out well when Dan met up with his father and he decided to go and fight aliens in the year 2051. Along the way, he met a scientist named Charlie (Sam Richardson) and a veteran who’s been sent to the war a few times named Dorian (Edwin Hodge).

When the new selected soldiers arrived in the downtown Miami of 2051, they were met with the nasty alien creatures. Dan who’s experience with military became the team’s leader and was connected with a commander named Forester (Yvonne Strahovski), who’s working on a special toxin capable of decimating the White Spikes. Dan and Forester has a special connection that I won’t divulge here and the faith of the world depends on them.

The script is written by Zack Dean and the theme of parental abandonment is pretty obvious, while I thought it’s a little bit hammy at times, I was caught up in the drama. As for as the alien invasion scenario, there’s nothing that we haven’t seen before. He borrowed a lot of elements from the Alien franchise, John Carpenter’s THE THING and EDGE OF TOMORROW. Heck even the root of the aliens was something out of the two Alien prequels, PROMETHEUS and ALIEN COVENANT.

I’ve never seen any work of director Chris McKay, apparently this is his first live action film and I thought he did a great job with the visual side. He and DP Larry Fong shot an epic looking film that would’ve been great to have seen on a big screen like Dolby Cinema or IMAX. McKay moved things along nicely by incorporating family drama and intense action sequences that were well staged and some were very exciting to watch. I thought the alien creatures design were top notch, those things looked nasty and scary. I wish they made it into a hard R-rated sci-fi pictures like STARSHIP TROOPERS or THE THING. I would’ve liked to see blood and gore in a picture like this.

Performances were good all around, I typically don’t see Pratt as an action hero. But he’s did a decent job as the macho type here and also softy regular Joe. I really enjoyed Strahovski’s intense performance here even though she wasn’t on the screen as much. I also enjoyed Richardson’s as the comic relief, fans of VEEP should be happy to see him here too. Simmons has a pretty small role but he’s good as usual.

I didn’t expect anything much from this film, but I was fully entertained, and I thought it has some epic action sequences that should satisfied fans of the genre. I would’ve been more than happy to have seen this on the big screen.

I echoed Ted that I also didn’t expect much from this movie. In fact, as I read a few terrible reviews on Twitter last week, I set my expectations quite low. I had just been talking about Independence Day which a huge box office hit 25 years ago. It seems it wouldn’t have been a proper Fourth of July viewing without an alien invasion of some sort.

Well, this time the aliens are trying to take over earth 30 years into the future, so there’s time travel involved. As with many sci-fi movies involving time traveling, it always raises more questions than answers and such is the case with this one. On December 2022, soldiers from the future suddenly show up in right in the middle of a World Cup match that our protagonist Dan Forester (Chris Pratt) and his family + friends happen to be watching LIVE during a Christmas party. It reminds me of The Dark Knight Rises when Bane destroyed the football stadium during a game. It’s basically an urgent call to arms for people living in the current timeline to help save the people of the future from a horrific alien invasion. It’s not clear right away just what kind of enemy they’re up against, apart from the fact that earth is losing–fast!

Given the desperate times they find themselves in, the drafting process itself is a pretty crude process. When Dan report to the military base when he’s called, he’s barely given any time to figure out what’s going on before they place some sort of tracking device on his arm (a pretty painful process) and he’s got only 24 hours to bid adieu to his family before reporting for duty. The recruits aren’t shown any photo nor video of the aliens during training as the military think that if they saw what they look like, nobody would’ve ever agreed to be drafted at all! Well, they have a good point there. These creatures are grotesque and really scary looking, huge mouth with sharp teeth with ashy complexion that reminds me of Immortan Joe in Mad Max: Fury Road. Plus they’ve got long tentacles that can shoot spikey bullets, hence they’re called the White Spikes.

There’s genuine suspense the first time the alien creature was introduced. Before they even face these threatening creatures though, the people would first have to survive the Jump Link technology itself, which is still in beta mode. One character said they’d still be testing it out on lab animals if they had more time, yikes!  When the large number of recruits are transported to the future for 7 days at a time,  most of them don’t even make it once they’re dropped in. They’re falling from the skies like rain drops, so if you fall on concrete or worse, then you’re basically dead or heavily injured. We’re also supposed to think the smartest scientists/engineers in the world are all so focused on beaming people to the future they have zero time to build better weapons to kill the aliens. I kept wishing these poor recruits would be given something more lethal than the automatic AR-type rifles. It’s only after we meet Yvonne Strahovski’s character, a military leader who’s also a brilliant scientist who comes up with a scientific solution that provides a smidgen of hope of actually wiping out the enemy.

It’s best not to overthink things though it was tough for me as I kept wondering why the future military don’t have higher tech weaponry, how people could even come back in 7 days time and how the whole time travel paradox works, etc. What is clear in this movie is the strong familial theme at its core. At first we see he’s got an estranged father James (a jacked-up J.K. Simmons), which thankfully isn’t just a hackneyed, throwaway plot but later on carries an emotional resonance. As is the case with the father/daughter relationship between Pratt and his daughter Muri that’s the heart and soul of the movie. The environmental commentary about climate change + global warming isn’t exactly subtle either, but at least it’s interwoven in the story in a non-preachy way. 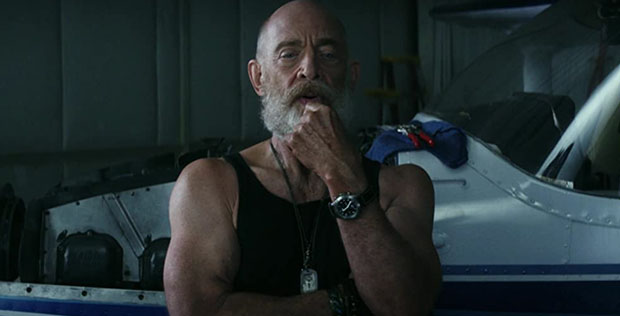 Acting-wise, the one I’m impressed with the most is Strahovski and her character is integral in the story, far from being a damsel in distress. I’ve only seen her in Chuck as I haven’t seen The Handmaid’s Tale, and she really sells the emotional scenes, which almost all of them involves her. Edwin Hodge is pretty memorable as well as a bad-ass war vet who’s already on his third deployment to the future (again, it’s unclear how he managed to do that). Simmons doesn’t have much screen time but he’s always fun to watch. I also enjoy Sam Richardson as Charlie who’s got a few funny moments throughout. As for Pratt, though he’s been in plenty of blockbusters, I still don’t really see him as a strong actor and this movie doesn’t change my mind. What he does have is that ‘aw-shucks’ likable charm and that earnest ‘everyman’ persona, kind of like Tom Hanks to a lesser degree.

The action sequences are pretty good with plenty of gripping moments along the way and the special effects are convincing enough which is to be expected given the $200 million budget. Unfortunately there are a good number of dumb and eye-roll inducing moments along with all the questionable ‘science.’ One of them is the way the protagonists always have time to bid long goodbyes as the entire world are exploding around them always gets on my nerves! Plus in this way they’re literally surrounded by those horrifying monsters clamoring to eat them alive. Unlike Ted though, I’m actually glad the filmmakers spare us from gratuitous bloody and gory scenes. One take away from the movie that I kept thinking about is how time travel is a privilege for some people. ‘Second chances are really hard to come by,’ Pratt’s character says a couple of times. It’s a clichéd line yet also a thought provoking one.

Director Chris McKay and writer Zach Dean didn’t exactly create an iconic alien disaster blockbuster, but it’s fun enough for a one-time watch. Like its protagonist, it’s a big, bombastic action flick that’s not afraid to be earnest and heartfelt. The tone might be uneven and doesn’t always transition smoothly between the drama and high-octane action, but at least its pacing makes the 2h 20min running time seems shorter than that. Overall it’s a decent popcorn Summer sci-fi adventure that ends on a hopeful note. I think given that the world’s just come out of a bleak pandemic, a great deal of cinematic optimism isn’t such a bad thing.

Have you seen THE TOMORROW WAR? Well, what did YOU think?